In the 19th century, before the creation of the Congo Free State, the Bangala (literally: 'river people') were a group of similar Bantu peoples living and trading along the bend of the Congo River that reached from Irebu at the mouth of the Ubangi River to the Mongala River.[5] They spoke similar languages, such as Losengo, but their trade language was Bangi, which was the most prestigious language between Stanley Pool (Kinshasa) and Irebu. As a result, people upstream of the Bangala mistook Bangi for the language of the Bangala and called it Lingala (language of the Bangala), and European missionaries followed suit.

In the last two decades of the 19th century, after the forces of Leopold II of Belgium conquered the region and started exploiting it commercially, Bangi came into wider use. The colonial administration, in need of a common language for the region, started to use the language for administrative purposes. It had already simplified, compared to local Bantu languages, in its sentence structure, word structure and sounds, and speakers borrowed words and constructs liberally from other languages. This allowed the language to spread easily amongst the Congolese population. However, the fact that speakers had very similar native languages prevented Lingala from becoming as radically restructured as Kituba, which developed among speakers of both Bantu and West African languages.

Around 1900, CICM missionaries started a project to "purify" the language in order to make it "pure Bantu" again. Meeuwis (1998:7) writes:

[M]issionaries, such as the Protestant W. Stapleton and later, and more influentially, E. De Boeck himself, judged that the grammar and lexicon of this language were too poor for it to function properly as a medium of education, evangelization, and other types of vertical communication with the Africans in the northwestern and central-western parts of the colony ... They set out to 'correct' and 'expand' the language by drawing on lexical and grammatical elements from surrounding vernacular languages.

The importance of Lingala as a vernacular has since grown with the size and importance of its main centers of use, Kinshasa and Brazzaville; with its use as the lingua franca of the armed forces; and with the popularity of soukous music.

European missionaries called the language Bangala, after the Bangala people, or Lingala. The latter was intended to mean '(language) of the Bangala' or 'of the River' (that is, 'Riverine Language'). However, this was an error, as the proper Bangi form would have been Kingala.[6] The name Lingala first appears in writing in a publication by the CICM missionary Egide De Boeck (1903).

According to some linguists, Lingala is a Bantu-based creole of Central Africa[7] with roots in the Bobangi language.[8] In its basic vocabulary, Lingala has many borrowings from various other languages, such as French, Spanish, Portuguese, and English.

In practice, the extent of borrowing varies widely with speakers of different regions (commonly among young people), and during different occasions.

The Lingala language can be divided into several dialects or variations. The major variations are considered to be Standard Lingala, Spoken Lingala, Kinshasa Lingala and Brazzaville Lingala.

Standard Lingala (called lingala littéraire or lingala classique in French) is mostly used in educational and news broadcasts on radio or television, in religious services in the Roman Catholic Church and is the language taught as a subject at all educational levels. Standard Lingala is historically associated with the work of the Catholic Church and missionaries. It has a seven-vowel system (/a/ /e/ /ɛ/ /i/ /o/ /ɔ/ /u/) with an obligatory tense-lax vowel harmony. It also has a full range of morphological noun prefixes with mandatory grammatical agreement system with subject–verb, or noun–modifier for each of class. Standard Lingala is largely used in formal functions.

Spoken Lingala (called lingala parlé in French) is the variation mostly used in the day-to-day lives of Lingalaphones. It has a full morphological noun prefix system, but the agreement system is more lax than the standard variation, i.e. noun-modifier agreement is reduced to two classes. Regarding phonology, there is also a seven-vowel system but the vowel harmony is not mandatory. This variation of Lingala is historically associated with the Protestant missionaries' work. Spoken Lingala is largely used in informal functions, and the majority of Lingala songs use spoken Lingala over other variations. Modern spoken Lingala is increasingly influenced by French; French verbs, for example, may be "lingalized" adding Lingala inflection prefixes and suffixes: "acomprenaki te" or "acomprendraki te" (he did not understand, using the French word comprendre) instead of classic Lingala "asímbaki ntína te" (literally: s/he grasped/held the root/cause not).

Lingala words show vowel harmony to some extent. The close-mid vowels /e/ and /o/ normally do not mix with the open-mid vowels /ɛ/ and /ɔ/ in words. For example, the words ndɔbɔ 'fishhook' and ndobo 'mouse trap' are found, but not *ndɔbo or *ndobɔ.

The Lingala spoken in Kinshasa shows a vowel shift from /ɔ/ to /o/, leading to the absence of the phoneme /ɔ/ in favor of /o/. The same occurs with /ɛ/ and /e/, leading to just /e/. So in Kinshasa, a native speaker will say mbóte as /ᵐbóte/, compared to the more traditional pronunciation of /ᵐbɔ́tɛ/.

(1) [ᶮʒ] is allophonic with [ʒ] depending on the dialect.

Lingala being a tonal language, tone is a distinguishing feature in minimal pairs, e.g.: mutu (human being) and mutú (head), or kokoma (to write) and kokóma (to arrive). There are two tones possible, the normal one is low and the second one is high. There is a third, less common tone – starting high, dipping low and then ending high – all within the same vowel sound, e.g.: bôngó (therefore).

Individual classes pair up with each other to form singular/plural pairs, sometimes called 'genders'. There are seven genders in total. The singular classes 1, 3, 5, 7, and 9 take their plural forms from classes 2, 4, 6, 8, 10, respectively. Additionally, many household items found in class 9 take a class 2 prefix (ba) in the plural: lutu → balutu 'spoon', mesa → bamesa 'table', sani → basani 'plate'. Words in class 11 usually take a class 10 plural. Most words from class 14 (abstract nouns) do not have a plural counterpart.

Class 9 and 10 have a nasal prefix, which assimilates to the following consonant. Thus, the prefix shows up as 'n' on words that start with t or d, e.g. ntaba 'goat', but as 'm' on words that start with b or p (e.g. mbisi 'fish'). There is also a prefixless class 9a and 10a, exemplified by sánzá → sánzá 'moon(s) or month(s)'. Possible ambiguities are solved by the context.

Noun class prefixes do not show up only on the noun itself, but serve as markers throughout the whole sentence. In the sentences below, the class prefixes are underlined. (There is a special verbal form 'a' of the prefix for class 1 nouns.)

Only to a certain extent, noun class allocation is semantically governed. Classes 1/2, as in all Bantu languages, mainly contain words for human beings; similarly, classes 9/10 contain many words for animals. In other classes, semantical regularities are mostly absent or are obscured by many exceptions.

There are four morphemes modifying verbs. They are added to some verb root in the following order:

Lingala is more a spoken than written language, and has several different writing systems, most of them ad hoc. As literacy in Lingala tends to be low, its popular orthography is very flexible and varies among the two republics. Some orthographies are heavily influenced by that of French; influences include a double S, ss, to transcribe [s] (in the Republic of the Congo); ou for [u] (in the Republic of the Congo); i with trema, aï, to transcribe [áí] or [aí]; e with acute accent, é, to transcribe [e]; e to transcribe [ɛ], o with acute accent, ó, to transcribe [ɔ] or sometimes [o] in opposition to o transcribing [o] or [ɔ]; i or y can both transcribe [j]. The allophones are also found as alternating forms in the popular orthography; sango is an alternative to nsango (information or news); nyonso, nyoso, nionso, nioso (every) are all transcriptions of nyɔ́nsɔ.

In 1976, the Société Zaïroise des Linguistes (Zairian Linguists Society) adopted a writing system for Lingala, using the open e (ɛ) and the open o (ɔ) to write the vowels [ɛ] and [ɔ], and sporadic usage of accents to mark tone, though the limitation of input methods prevents Lingala writers from easily using the ɛ and ɔ and the accents. For example, it is almost impossible to type Lingala according to that convention with a common English or French keyboard. The convention of 1976 reduced the alternative orthography of characters but did not enforce tone marking. The lack of consistent accentuation is lessened by the disambiguation due to context.

The popular orthographies seem to be a step ahead of any academic-based orthography. Many Lingala books, papers, even the translation of the Universal Declaration of Human Rights and more recently, Internet forums, newsletters, and major websites, such as Google's Lingala, do not use the Lingala-specific characters ɛ and ɔ. Tone marking is found in most literary works.

The Lingala language has 35 letters and digraphs. The digraphs each have a specific order in the alphabet; for example, mza will be expected to be ordered before mba, because the digraph mb follows the letter m. The letters r and h are rare but present in borrowed words. The accents indicate the tones as follows: 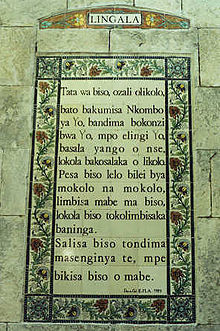 The Mandombe script is an abugida, primarily used to write Kikongo, that can also be used for Lingala. The script is used in the church of Kimbangu as a liturgical script.