Lincoln Park is a designated community area on the North Side of Chicago, Illinois. Lying to the west of Lincoln Park, Chicago's largest park, it is one of the most affluent neighborhoods in Chicago. 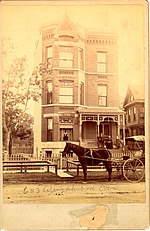 1880s photo of 653 W. Wrightwood (now 655 W. Wrightwood) in the Lincoln Park neighborhood, typical of the Victorian-era structures in the area. Note the wooden sidewalk, dirt road and lack of buildings surrounding the edifice.

1934 FBI photograph of the Biograph, soon after the shooting of John Dillinger

Building on Orchard and Dickens in 1964 defaced with 'Young Lords' Graffito.

The 2003 Chicago balcony collapse was a disaster that occurred on June 29, 2003 in Lincoln Park, resulting in the deadliest porch collapse in United States history.

In 1836, land from North to Fullerton and from the lake to Halsted was relatively inexpensive, costing $150 per acre ($370 ha) (1836 prices, not adjusted for inflation). Because the area was considered remote, a smallpox hospital and the city cemetery were located in Lincoln Park until the 1860s.[5][6]

In 1837, Chicago was incorporated as a city, and North Avenue (to the south of today's Lincoln Park neighborhood) was established as the city's northern boundary. Settlements increased along Green Bay Trail when the government offered land claims and Green Bay Road was widened. The area north of Chicago, including today's Lincoln Park, was eventually incorporated as Lake View Township. The city, nonetheless, owned extensive tracts of land north of North Avenue, including what is now the park. The Township was annexed to Chicago in 1889.[7] The Lincoln Park Zoo opened in 1868.[8]

In the period following the Civil War, the area around Southport and Clybourn became home to a community of Kashubian immigrants. Arriving from what is now north-eastern Poland, Chicago's Kashubians brought their own distinct culture and language, influenced by their rustic traditions and by their close contact with their German neighbors. In 1882, St. Josaphat's Roman Catholic parish was established specifically for the Kashubian community. The resulting nicknames of "Jozafatowo" (Polish for "Josaphat's Town") as well as "Kaszubowo" (Polish for "Cassubian Town") made the neighborhood one of Chicago's Polish Patches. The current Romanesque Revival church building was completed in 1902. A Pomeranian Griffin Crest visible on the school south of the church is a nod to the parish that once anchored one of the communities in Chicago dubbed Little Cassubia."

During the Great Depression, many buildings in Lincoln Park fell into disrepair.[12]In 1954 the Lincoln Park Conservation Association was founded to prevent deterioration of housing in the neighborhood and by 1956 Lincoln Park received urban renewal funds to renovate and restore old buildings and schools.[13]

In 1968, a violent confrontation between demonstrators and police in Lincoln Park occurred during the week of the 1968 Democratic National Convention.[14]

I pointed out that it was in the best interests of the City to have us in Lincoln Park ten miles away from the Convention hall. I said we had no intention of marching on the Convention hall, that I didn't particularly think that politics in America could be changed by marches and rallies, that what we were presenting was an alternative life style, and we hoped that people of Chicago would come up, and mingle in Lincoln Park and see what we were about.

— Abbie Hoffman from the Chicago 7 trial[15]

In the 1950s, 1960s, and 1970s, Lincoln Park became home to the first Puerto Rican immigrants to Chicago. Jose Cha Cha Jimenez transformed the local Young Lords gang into human rights activists for Latinos and the poor.[16] They published newspapers,[17] mounted sit-ins and takeovers of institutions and churches at Grant Hospital, Armitage Ave. Methodist Church, and McCormick Theological Seminary.[18] In 1969, members of the Puerto Rican Young Lords and residents and activists mounted gigantic demonstrations and protested the displacement of Puerto Ricans and the poor including the demolition of buildings on the corner of Halsted and Armitage streets, by occupying the space and some administration buildings at McCormick Theological Seminary[19]. There were civil rights arrests and martyrs including the unsolved murders of United Methodist Rev. Bruce Johnson and his wife Eugenia Ransier Johnson who were strong supporters of the poor. Today their history is archived at DePaul University's Richardson Library and at Special Collections at Grand Valley State University.

On June 29, 2003, a porch collapse occurred during a party at 713 W. Wrightwood Ave. The disaster was the deadliest porch collapse in U.S. history; 13 people were killed and 57 seriously injured.

As of 2015, the neighborhood is primarily made up of young urban professionals, recent college graduates, and young families.[citation needed] The slang terms Trixie and Chad have their origins in Lincoln Park.[citation needed]

Lincoln Park's boundaries are precisely defined in the city's list of official community areas. It is bordered on the north by Diversey Parkway, on the west by the Chicago River, on the south by North Avenue, and on the east by Lake Michigan.[21] 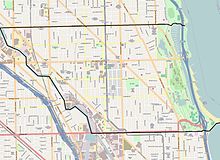 The neighborhood contains a large number of upscale national retailers, boutiques, bookstores, restaurants and coffee shops. An Apple Store opened in October 2010, as well as a Lacoste store across the street. There are also many bars and clubs in the area.

A. Finkl & Sons Steel operated on the west side of Lincoln park along an approximately 22-acre lot by the Chicago River for 113 years. The site is now vacant and is the site of the proposed Lincoln Yards project.

Lincoln Park is one of the wealthiest and most expensive communities in which to live. While the average single-family house is priced around $1 million, many homes in the area sell for more than $10 million. In 2007, Forbes magazine named the area between Armitage Avenue, Willow Street, Burling Street, and Orchard Street as the most expensive block in Chicago.[22] 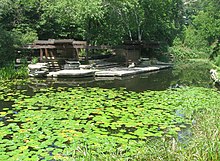 Many smaller parks, such as Bauler Park (named for 'Paddy' Bauler, former Alderman of the 43rd ward) and Jonquil Park are scattered throughout the Lincoln Park neighborhood.[citation needed]

The Lincoln Park neighborhood is accessible via mass transit operated by the CTA.[24] These include the Chicago "L"'s Red, Brown and Purple lines at the Fullerton station and the Purple and Brown lines at the Armitage and Diversey stations, as well as CTA bus service.

Via car, Lincoln Park can be reached by using Lake Shore Drive or the Kennedy Expressway.

Lincoln Park is currently part of the 2nd, 32nd, and 43rd wards of the Chicago City Council, where it is respectively represented by Democratic aldermen Brian K. Hopkins, Scott Waguespack, and Michele Smith. 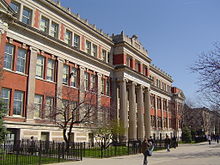 The French-American School of Chicago, a program for advanced French speakers, holds its classes at Lincoln Elementary and Lincoln Park High.[34]

The Roman Catholic Archdiocese of Chicago operates the Saint Clement School,[35] a K-8 school, in the Lincoln Park area.

Global Citizenship Experience High School,[36] a 9–12 school, is in the area. 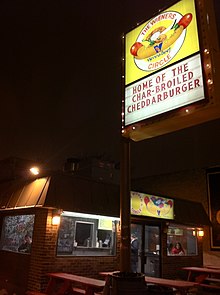 Lincoln Park has numerous restaurants, including Chicago's only 3-Michelin star restaurant, Alinea. The Lettuce Entertain You restaurant company started at R.J. Grunts at 2056 N. Lincoln Park West, which is also home to the one of the first salad bars.[38] The Wieners Circle on Clark and Wrightwood is a fast food restaurant that is known for its Polish sausage and the mutual verbal abuse between staff and customers.[39] Demon Dogs was a popular hot dog restaurant that stood under the Fullerton El station from 1983 until 2006. The first Potbelly Sandwich Works opened in 1977 on Lincoln Avenue in Lincoln Park, where it is still in operation today. Chicago Pizza and Oven Grinder Company is a popular restaurant on Clark Street.

Chicago Pride Parade in Lincoln Park in 1985 on Clark Street

Lincoln Park was home to a number of important historic figures including: