Libyan Arab Airlines Flight 114 (LN 114) was a regularly scheduled flight from Tripoli to Cairo via Benghazi. In 1973 a Boeing 727-200 that was serving this flight was shot down by Israeli fighter jets.

On 21 February 1973, the aircraft left Tripoli and flew to Benghazi. After taking off from Benghazi, it became lost because of a combination of bad weather and equipment failure over northern Egypt. It entered airspace over the Sinai Peninsula (then occupied by Israel), where it was intercepted by two Israeli F-4 Phantom IIs, and was shot down after several attempts from the Israeli fighter pilots to make the Libyan aircraft land. Of the 113 people on board, there were five survivors, including the co-pilot.[1]:288[2] 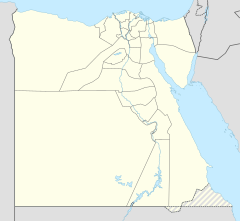 Location of the crash within Egypt

The flight was operated with a Boeing 727–224, registration 5A-DAH, Flight 114 was an international scheduled Tripoli–Benghazi–Cairo passenger service.[3][4]:276 There was a crew of nine on board the aircraft. Five crew members were French, including the pilot-in-command, 42-year-old Jacques Bourges. The crew were contracted to Air France and Libyan Arab Airlines.[5] After a brief stop in Benghazi, the aircraft continued to Cairo with 113 people on board.[6] Most of the passengers were Arabs but there were two Germans and an American on board.[5]

5A-DAH, the Libyan Arab Airlines Boeing 727 that was involved in the incident, in 1972.

Normally, the Benghazi–Cairo route was flown eastwards along the Libyan coast until reaching the city of Sidi Barrani in Egypt, where the airway turned inland to the VHF omnidirectional range (VOR) and non-directional beacon (NDB) area located west of Lake Qarun. The entry to the Cairo terminal area was made on a north-easterly heading over a 71-nautical-mile (131 km) long path that separated Lake Qarun from the Cairo VOR.[4]:276 At 13:45 the Cairo traffic control (CTC) saw the aircraft approaching from the west. Permission was granted to land in runway 23. CTC surprisingly saw the Boeing heading eastward towards the Suez Canal at 13:50.[5] Evidence from both the recovered Boeing 727 voice recorders and the Israeli authorities' flight data recorder later showed that the Libyan aircraft was likely to have been already off course when it reported its position over Qarun, probably due to strong westerly upper-level winds associated to a low level sandstorm.[4]:276 The crew was forced to rely on instrument navigation because of this sandstorm. Both instrument and navigational error caused the aircraft to go off course, entering Israeli-controlled airspace over the Sinai Peninsula. By this time the aircraft had been lost from the Egyptian air traffic control. The crew believed they were close to the destination airport and started the descent.[6]

At 13:55 the aircraft was detected in the radar by the Israelis as it was entering Israeli airspace; it was located south-east of Suez at an altitude of 15,000 feet (4,600 m).[5] Two Israeli Air Force Phantoms were sent to intercept the then-unidentified aircraft.[6] Following the re-establishment of communications with CTC the pilot of the Libyan aircraft looked through the cabin's port window and saw the fighters, but he mistook them for Egyptian MIGs. The Libyan aircraft continued flying deeper into the Sinai at a speed of 325 miles per hour (523 km/h), but it suddenly veered to the west. At this point the Boeing's crew realised they were having problems with their instruments.[5] The 727 adopting a westward course was interpreted by the Israeli pilots as an attempt to flee.[7] The Israeli fighter pilots attempted to make visual contact with the passenger airliner's crew and tried to communicate to them several times by signaling with their hands. With a gesture, the 727's pilot responded with a refusal, showing their intentions to continue flying on instead. The fighters replied by dipping their wings but this was once again ignored by the Libyan airliner crew. It was at this time that the Israeli fighters attacked.[1]:288

The Israeli Phantom pilots fired bursts from their 20 mm M61 cannons, severely damaging the airliner's control surfaces, hydraulic systems, and wing structure. Flight 114 attempted an emergency landing but the aircraft hit the top of a sand dune; it bounced hard and a wing section was tore off before the airframe slid down a slope.[5][1]:289 Thirteen people were still alive in the burning wreckage when Israeli soldiers arrived at the crash site; seven of them still lived two days later.[5] 108 of the 113 people aboard died,[7] including the former foreign minister, Salah Busir.[8][9]

The co-pilot, who survived, later said that the flight crew knew the Israeli jets wanted them to land but relations between Israel and Libya made them decide against following instructions.[1]:288 The Libyan government, however, said the attack occurred without warning.[1]:288 Israel's air force perceived Flight 114 as a security threat, and that among the possible tasks it could have been undertaking was an aerial spy mission over the Israeli air base at Bir Gifgafa.[1]:289

The Israeli government said LN 114 was shot down with the authorisation of David Elazar, the Israeli chief of staff.[citation needed] Israel's argument was that the heightened security situation and the erratic behaviour of the jet's crew made the attack prudent. In spite of the arguments stated by Israel many nations, including the Soviet Union, condemned the attack.[1]:289 The United Nations did not take action against Israel. The 30 member-nations of the International Civil Aviation Organization voted to censure Israel for the attack. The United States did not accept the reasoning given by Israel, and condemned the incident.[1]:290 Israel's Defense Minister, Moshe Dayan, called it an "error of judgment", and Israel paid compensation to the victims' families.[7]