The Libertarian Party of Canada (French: Parti libertarien du Canada) is a federal political party in Canada founded in 1973.[1] The party subscribes to classical liberal tenets of the libertarian movement across Canada. The mission of the party is to reduce the size, scope and cost of government.[4] Policies the party advocates for include ending drug prohibition, ending government censorship, lowering taxes, protecting gun rights and non-interventionism.[5]

The party was founded on 7 July 1973 by Bruce Evoy[citation needed] (who became its first chairman) and seven others. Evoy ran for election to Parliament in the 1974 federal election in the Toronto riding of Rosedale. The party achieved registered status in the 1979 federal election by running more than fifty candidates.

The party described itself as Canada's "fourth party" in the 1980s,[citation needed] but it has since been displaced by new parties such as the Bloc Québécois and the Green Party of Canada. The party declined to join the Reform Party of Canada when it was formed in 1987.[citation needed] Many libertarians were also attracted to provincial Progressive Conservative parties that moved to the right during the 1990s in Ontario under Mike Harris and in Alberta under Ralph Klein. The decline in the party's membership and resources resulted in Elections Canada removing their status as a registered party immediately before the 1997 federal election when the party failed to run the minimum fifty candidates needed to maintain its registration.[citation needed]

In the 2015 federal election, the party fielded 72 candidates and solidified their position as the 6th federal party in Canada, with growth over 500% from the 2011 federal election.

The next Federal Libertarian Party of Canada Convention took place in Ottawa from 5 July through 7 July 2018, concluding on the 45th anniversary of the party.[7]

On 17 September, Moen announced he was considering merging the Libertarian Party with the newly formed People's Party of Canada led by former Conservative MP Maxime Bernier.[8] The matter is to be put to a party vote at an as yet undisclosed date.

The party also nominated a number of candidates to run in by-elections: 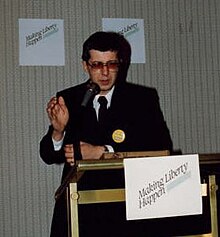