Advertisement - You can get this game from STEAM
For other uses, see Lexington Avenue (disambiguation).
North-south avenue in Manhattan, New York

Lexington Avenue, often colloquially abbreviated as "Lex", is an avenue on the East Side of the borough of Manhattan in New York City that carries southbound one-way traffic from East 131st Street to Gramercy Park at East 21st Street. Along its 5.5-mile (8.9-kilometer), 110-block route, Lexington Avenue runs through Harlem, Carnegie Hill, the Upper East Side, Midtown, and Murray Hill to a point of origin that is centered on Gramercy Park. South of Gramercy Park, the axis continues as Irving Place from 20th Street to East 14th Street.

Lexington Avenue was not one of the streets included in the Commissioners' Plan of 1811 street grid, so the addresses for cross streets do not start at an even hundred number, as they do with avenues that were originally part of the plan. 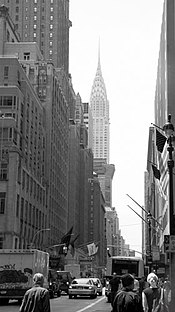 View of Lexington Avenue south from 50th street, with the Chrysler Building in the background

Both Lexington Avenue and Irving Place began in 1832 when Samuel Ruggles, a lawyer and real-estate developer, petitioned the New York State Legislature to approve the creation of a new north/south avenue between the existing Third and Fourth Avenues, between 14th and 30th Streets. Ruggles had purchased land in the area, and was developing it as a planned community of townhouses around a private park, which he called Gramercy Park. He was also developing property around the planned Union Square, and wanted the new road to improve the value of these tracts. The legislation was approved, and, as the owner of most of the land along the route of the new street, Ruggles was assessed for the majority of its cost. Ruggles named the southern section, below 20th Street, which opened in 1833, after his friend Washington Irving. The northern section, which opened three years later, in 1836, was named after the Battle of Lexington in the Revolutionary War.[3][4]

Lexington saw the first arrest in New York for speeding, in 1899, when a bicycle patrolman overtook cabdriver Jacob German, who had been racing down the avenue at the "reckless" speed of 12 mph (19 km/h).[5] The portion of Lexington Avenue above East 42nd Street was reconstructed at the same time as the IRT Lexington Avenue Line of the New York City Subway. The widened street and the subway line both opened on July 17, 1918.[6]

Portions of the avenue were widened in 1955, which required eminent domain takings of the facades of some structures along Lexington.[7]

The July 18, 2007 New York City steam explosion sent a geyser of hot steam up from beneath the avenue at 41st Street resulting in one death and more than 40 injuries.

Lexington Avenue runs one-way southbound for its entire length from 131st to 21st Streets. Parallel to Lexington Avenue lies Park Avenue to its west and Third Avenue to its east. The avenue is largely commercial at ground level, with offices above. There are clusters of hotels in the 30s and 40s, roughly from the avenue's intersection with 30th Street through to its intersection with 49th Street, and apartment buildings farther north.

There are numerous structures designated as New York City Landmarks (NYCL), National Historic Landmarks (NHL), and National Register of Historic Places (NRHP) on Lexington Avenue. From south to north (in increasing address order), they include:[9][10] 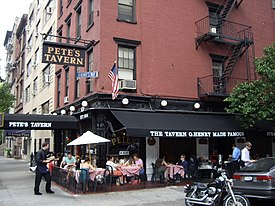 In contrast to Lexington Avenue, the six-block stretch of Irving Place, from 14th to 20th Street at Gramercy Park carries two-way traffic and is decidedly local in nature. After the opening of Union Square in 1839, the Irving Place area became one of the most sought-after residential neighborhoods in the city, a situation which was only enhanced by the development of Gramercy Park to the north and Stuyvesant Square to the east.[4]

An assortment of restaurants and bars line Irving Place, including Pete's Tavern, New York's oldest surviving saloon, where O. Henry supposedly conceived of his short story "The Gift of the Magi", and which survived Prohibition disguised as a flower shop. Irving Plaza, on East 15th Street and Irving, hosts numerous concerts for both well-known and indie bands and draws a crowd almost every night. Another component of the avenue are the large apartment buildings which line the street from Gramercy Park to 17th Street. Also at 17th, a small bed-and-breakfast, the Inn at Irving Place, occupies two Greek Revival architecture townhouses built in 1840–1841 and renovated between 1991 and 1995.

Offices located on Irving Place include those of The Nation magazine, the New York branch of the Rosicrucian Order and the Seafarers and International House mission.[11] There are also a number of clinics and official city buildings along the street, including Washington Irving High School and the headquarters of the New York City Human Resources Administration.[11] The bottom of the street is anchored by the rear of the Zeckendorf Towers condominium apartment complex on the west side, and the Consolidated Edison Building on the east.[11]

The following buses use Lexington Avenue between the following streets (northbound buses run along Third Avenue):

Lexington Avenue became part of a classic American cinematic moment, in the 1955 movie The Seven Year Itch, the scene in which Marilyn Monroe shot what would become her most famous scene. Whilst she stands on a subway grating outside the Loew's Lexington theatre, her skirt billows up from the wind underneath. While the footage showing the theatre in the background appeared in the finished film, the footage featuring the subway grate shot on September 15, 1954, on the corner of Lexington Avenue and 51st Street was more of a publicity stunt; retakes were shot on a studio soundstage, and shots from both are seen in the film.[12]

This street was also featured in the film 1408.