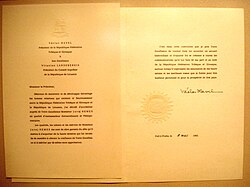 Letter of credence for the Czechoslovak Ambassador to Lithuania, written in the traditional French and signed by President Václav Havel

Letters of credence are traditionally written in French, the lingua franca of diplomacy.[1] However, they may also be written in the official language of the sending state.[2][3]

Upon arrival at his or her post, an ambassador meets with the foreign minister to arrange for an audience with the head of state.[4] The ambassador carries both a sealed original and an unsealed copy of his credentials. The unsealed copy is given to the foreign minister upon arrival, and the original is presented personally to the head of state in a formal ceremony.[5]:550 Ambassadors do not begin their duties until their credentials are accepted, and their precedence within the diplomatic corps is determined by the date on which the credentials were presented.[6] However, ambassadors are entitled to diplomatic immunity as soon as they enter the country.[7]:32[8]:261

The ambassador travels to the presentation ceremony in an official vehicle provided by the receiving state, accompanied by a military escort. In constitutional monarchies and parliamentary democracies, the head of state or viceroy acts according to advice (binding instructions) from the government. The foreign minister will attend (be present with) the head of state at the actual ceremony, to symbolize the fact that the credentials are being accepted on the basis of government advice.[9] The ambassador uses both hands to present his or her credentials to the head of state.[10]