Joannes Leo Africanus (/ˌæfrɪˈkeɪnəs/; born al-Hasan ibn Muhammad al-Wazzan al-Fasi, Arabic: حسن ابن محمد الوزان الفاسي‎; c. 1494 – c. 1554) was a Berber[2] Andalusi diplomat and author who is best known for his book Descrittione dell’Africa (Description of Africa) centered on the geography of the Maghreb and Nile Valley. The book was regarded among his scholarly peers in Europe as the most authoritative treatise on the subject until the modern exploration of Africa.[3] For this work, Leo became a household name among European geographers.

The courtyard of the University of al-Qarawiyyin, Fez, Morocco, where al-Hasan (future Leo Africanus) studied.

Most of what is known about his life is gathered from autobiographical notes in his own work. Leo Africanus was born as al-Hasan, son of Muhammad in Granada around the year 1494.[3] The year of birth can be estimated from his self-reported age at the time of various historical events.[4] His family moved to Fez soon after his birth.[3][5] In Fez he studied at the University of al-Qarawiyyin (also spelled al-Karaouine). As a young man he accompanied an uncle on a diplomatic mission, reaching as far as the city of Timbuktu (c. 1510), then part of the Songhai Empire. In 1517 when returning from a diplomatic mission to Constantinople on behalf of the Sultan of Fez Muhammad II he found himself in the port of Rosetta during the Ottoman conquest of Egypt. He continued with his journey through Cairo and Aswan and across the Red Sea to Arabia, where he probably performed a pilgrimage to Mecca.

On his way back to Tunis in 1518 he was captured by Spanish corsairs either near the island of Djerba or more probably near Crete, and imprisoned on the island of Rhodes, the headquarters of the Knights Hospitaller. The usual fate of unransomed Muslim captives was slavery in Christian galleys, but when his captors realized his intelligence and importance, he was moved to the Castel Sant’Angelo in Rome and presented to Pope Leo X. He was soon freed and given a pension to persuade him to stay. He was baptized in the Basilica of Saint Peter's in 1520. He took the Latin name Johannes Leo de Medicis (Giovanni Leone in Italian). In Arabic, he preferred to translate this name as Yuhanna al-Asad al-Gharnati (literally means John the Lion of Granada). It is likely that Leo Africanus was welcomed to the papal court as the Pope feared that Turkish forces might invade Sicily and southern Italy, and a willing collaborator could provide useful information on North Africa.[3] 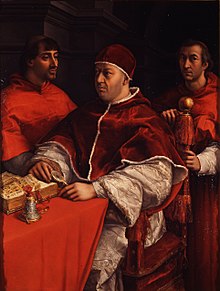 Leo Africanus left Rome and spent the next three or four years traveling in Italy. The death of his patron Leo X in 1521, and suspicions from the new Pope Adrian VI against a Muslim in court, was likely the reason for his leaving Rome. While staying in Bologna he wrote an Arabic-Hebrew-Latin medical vocabulary, of which only the Arabic part has survived, and a grammar of Arabic of which only an eight-page fragment has survived. He returned to Rome in 1526 under the protection of the new Pope Clement VII, a cousin of Leo X who replaced Adrian. According to Leo, he completed his manuscript on African geography in the same year. The work was published in Italian with the title Della descrittione dell’Africa et delle cose notabili che iui sono, per Giovan Lioni Africano in 1550 by the Venetian publisher Giovanni Battista Ramusio. The book proved to be extremely popular and was reprinted five times. It was also translated into other languages. French and Latin editions were published in 1556 while an English version was published in 1600 with the title A Geographical Historie of Africa.[6] The Latin edition, which contained many errors and mistranslations, was used as the source for the English translation.[3]

There are several theories of his later life, and none of them are certain. According to one theory, he spent it in Rome until he died around 1550, the year Description of Africa was published. This theory was based on indirect allusion in a later preface to this book. According to another theory, he left shortly before the Sack of Rome by Charles V's troops in 1527. He then returned to North Africa and lived in Tunis until his death, some time after 1550. This was based on records by German orientalist Johann Albrecht Widmannstetter, who arrived in Italy and planned (but ultimately failed) to travel to Tunis to meet Leo who had since reconverted to Islam. Yet another theory said that he left Tunis after it was captured by Charles V in 1535 for Morocco, his second home country after Granada where his relatives were still living. This was based on the assumption that Leo, having left Granada, would not have wanted to live under Christian Spanish rule again, and his wish (recorded in Description of Africa) that he wanted to ultimately return to his home country "by God's assistance".[3]

It is unlikely that Leo Africanus visited all the places that he describes and he must therefore have relied on information obtained from other travellers. In particular, it is doubtful whether he ever visited Hausaland and Bornu[7] and it is even possible that he never crossed the Sahara but relied on information from other travellers that he met in Morocco. The historian Pekka Masonen has argued that the belief of his further travels was based on misreadings by modern scholars who interpreted his book as an itinerary.[3]

At the time Leo visited the city of Timbuktu, it was a thriving Islamic city famous for its learning. Home to many scholars and learned men, Timbuktu also possessed a Great Mosque, renowned for its expansive library. The town was to become a byword in Europe as the most inaccessible of cities. At the time of Leo's journey there, it was the centre of a busy trade carried on by traders in African products, gold, printed cottons and slaves, and in Islamic books.[3]

In an autograph in one of his surviving manuscripts, a fragment of an Arabic-Hebrew-Latin medical vocabulary he wrote for the Jewish physician Jacob Mantino, he signed his name in Arabic as Yuhanna al-Asad al-Gharnati (literally means John the Lion of Granada), a translation of his Christian name, John-Leo, or Johannes Leo (Latin), or Giovanni Leone (Italian). He was also given the family name Medici after his patron, Pope Leo X's family. The same manuscript also contained his original name al-Hasan ibn Muhammad al-Wazzan al-Fasi. al-Hasan ibn Muhammad was a patronymic name meaning "al-Hasan, son of Muhammad", and al-Fasi is the Arabic demonym for someone from Fez, Morocco.[3] 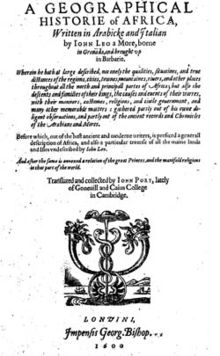 The title page of the 1600 English edition of Leo Africanus’s book on Africa.
See also: Description of Africa (1550 book)

Description of Africa, published in 1550 by Giovanni Battista Ramusio, is Leo's most famous work.

Other than this, he wrote an Arabic-Hebrew-Latin medical vocabulary for the Jewish physician Jacob Mantino. He also wrote an Arabic translation of the Epistles of St. Paul, which is dated in January 1521, and the manuscript currently belongs to the Biblioteca Estense in Modena. Another surviving work is a biographical encyclopedia of 25 major Islamic scholars and 5 major Jewish scholars. It was completed in Rome before he left the city in 1527 and published for the first time in Latin by Johann Heinrich Hottinger in 1664. Unlike Description of Africa, this biographical work was hardly noticed in Europe. It also contains various erroneous information, likely due to his lack of access to relevant sources when he was in Italy, forcing him to rely solely on memory.[3]

In Description of Africa, he also referred to plans to write other books. He planned to write two other descriptions of places, one for places in the Middle East and another for places in Europe. He also planned to write an exposition of the Islamic faith and a history of North Africa. However, none of these books survived nor has there been any proof that he actually completed them. This might have been due to his possible return to North Africa.[3]

A fictionalized account of his life, Leo Africanus, by the Lebanese-French author Amin Maalouf, fills in key gaps in the story and places Leo Africanus in prominent events of his time.

The BBC produced a documentary about his life called "Leo Africanus: A Man Between Worlds" in 2011. It was presented by Badr Sayegh and directed by Jeremy Jeffs. The film followed in Leo's footsteps from Granada, through Fez and Timbuktu, all the way to Rome.

It has been suggested that William Shakespeare may have been inspired by Leo Africanus' book to create the character of Othello.[8]