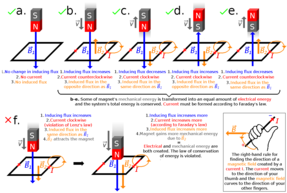 Lenz's law tells the direction of a current in a conductor loop induced indirectly by the change in magnetic flux through the loop. Scenarios a, b, c, d and e are possible. Scenario f is impossible due to the law of conservation of energy. The charges (electrons) in the conductor are not pushed in motion directly by the change in flux, but by a circular electric field (not pictured) surrounding the total magnetic field of inducing and induced magnetic fields. This total magnetic field induces the electric field.

It is a qualitative law that specifies the direction of induced current, but states nothing about its magnitude. Lenz's law explains the direction of many effects in electromagnetism, such as the direction of voltage induced in an inductor or wire loop by a changing current, or the drag force of eddy currents exerted on moving objects in a magnetic field.

Lenz's law may be seen as analogous to Newton's third law in classical mechanics.[2]

Lenz's law states that the current induced in a circuit due to a change in a magnetic field is directed to oppose the change in flux and to exert a mechanical force which opposes the motion.

Lenz's law is contained in the rigorous treatment of Faraday's law of induction, where it finds expression by the negative sign:

which indicates that the induced electromotive force

and the rate of change in magnetic flux

This means that the direction of the back EMF of an induced field opposes the changing current that is its cause. D.J. Griffiths summarized it as follows: Nature abhors a change in flux.[4]

If a change in the magnetic field of current i1 induces another electric current, i2, the direction of i2 is opposite that of the change in i1. If these currents are in two coaxial circular conductors ℓ1 and ℓ2 respectively, and both are initially 0, then the currents i1 and i2 must counter-rotate. The opposing currents will repel each other as a result.

Magnetic fields from strong magnets can create counter-rotating currents in a copper or aluminum pipe. This is shown by dropping the magnet through the pipe. The descent of the magnet inside the pipe is observably slower than when dropped outside the pipe.

Detailed interaction of charges in these currents 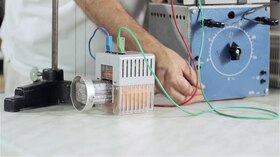 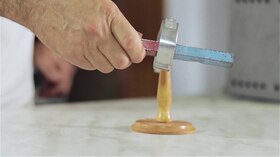 Play media
Experiment showing Lenz's law with two aluminium rings on a scales-like device set up on a pivot so as to freely move in the horizontal plane. One ring is fully enclosed, while the other has an opening, not forming a complete circle. When we place a bar magnet near the fully enclosed ring, the ring is repulsed by it. However, when the system comes to a rest, and we remove the bar magnet, then the ring is attracted by it. In the first case, the induced current created in the ring resists the increase of magnetic flux caused by the proximity of the magnet, while in the latter, taking the magnet out of the ring decreases the magnetic flux, inducing such current whose magnetic field resists the decrease of flux. This phenomenon is absent when we repeat the experiment with the ring that isn't enclosed by inserting and removing the magnet bar. The induced currents in this ring can't enclose themselves in the ring, and have a very weak field that cannot resist the change of the magnetic flux.

In electromagnetism, when charges move along electric field lines work is done on them, whether it involves storing potential energy (negative work) or increasing kinetic energy (positive work).

When net positive work is applied to a charge q1, it gains speed and momentum. The net work on q1 thereby generates a magnetic field whose strength (in units of magnetic flux density (1 tesla = 1 volt-second per square meter)) is proportional to the speed increase of q1. This magnetic field can interact with a neighboring charge q2, passing on this momentum to it, and in return, q1 loses momentum.

The charge q2 can also act on q1 in a similar manner, by which it returns some of the momentum that it received from q1. This back-and-forth component of momentum contributes to magnetic inductance. The closer that q1 and q2 are, the greater the effect. When q2 is inside a conductive medium such as a thick slab made of copper or aluminum, it more readily responds to the force applied to it by q1. The energy of q1 is not instantly consumed as heat generated by the current of q2 but is also stored in two opposing magnetic fields. The energy density of magnetic fields tends to vary with the square of the magnetic field's intensity; however, in the case of magnetically non-linear materials such as ferromagnets and superconductors, this relationship breaks down.

Momentum must be conserved in the process, so if q1 is pushed in one direction, then q2 ought to be pushed in the other direction by the same force at the same time. However, the situation becomes more complicated when the finite speed of electromagnetic wave propagation is introduced (see retarded potential). This means that for a brief period the total momentum of the two charges is not conserved, implying that the difference should be accounted for by momentum in the fields, as asserted by Richard P. Feynman.[5] Famous 19th century electrodynamicist James Clerk Maxwell called this the "electromagnetic momentum".[6] Yet, such a treatment of fields may be necessary when Lenz's law is applied to opposite charges. It is normally assumed that the charges in question have the same sign. If they do not, such as a proton and an electron, the interaction is different. An electron generating a magnetic field would generate an EMF that causes a proton to accelerate in the same direction as the electron. At first, this might seem to violate the law of conservation of momentum, but such an interaction is seen to conserve momentum if the momentum of electromagnetic fields is taken into account.