Leninist Komsomol of the Russian Federation

The Leninist Young Communist League traces its origins to the founding of the Soviet Komsomol in 1918. After the dissolution of the Soviet Union in 1991, the Komsomol, having already lost much of its original identity, was disorganized and de facto dissolved. Many socialist and communist youth organizations would emerge from its ruins, many of which would come together to form the Union of Communist Youth in 1999.

In 2004, there was an internal conflict within the ranks of the Union of Communist Youth, resulting in a split of two factions, one headed by Yuri Afonin, and the other by Konstantin Zhukov. Afonin's faction represented the overwhelming majority of the organization members and remained tied to the KPRF, while Zhukov's faction became independent and gradually deteriorated into organization without any members, but with the leadership. Both factions kept the same name until February 2011 when the faction headed by Afonin changed name to the Leninist Communist Youth Union of the Russian Federation.

The Leninist Communist Youth Union was a main organization that took part in efforts to organize the 19th World Festival of Youth and Students which took place in October 2017 in Sochi. 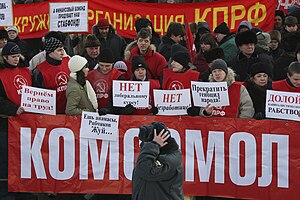 Komsomol at a rally

To reach the objectives of the organization, LKSM leads a variety of activities, such as: Organizing meetings, rallies, demonstrations, picketing with the purpose of expressing an opinion on current societal and youth issues. Participating in election campaigns for the Communist Party, put forward, in collaboration with the Communist Party, its representatives in government bodies at various levels. Developing a network of regional, local and primary LKSM offices. Organizing at the universities: courses, clubs, libraries, studios, summer camps etc.[1]