Ukrainian language Rusyns Ukrainians
This article is about the Lemko peoples. For their attempted nation, see Lemko Republic.

Their affiliation with other ethnicities is controversial, although individual Lemkos generally self-identify as a sub-group of Ruthenians and/or Ukrainians. Other ethnic groups identifying as Ruthenians and/or Ukrainian include the Boykos and Hutsuls. Members of these groups have increasingly rejected official ethnic designations such as Verkhovyntsi (Highlanders), and/or as a sub-group of Ukrainets (ethnic Ukrainian), in favor of the Rusyn identity; a trend that can be observed in official census statistics in Slovakia.[4][failed verification]

The spoken language of the Lemkos, which has a code of rue under ISO 639-3, has been variously described as a language in its own right, a dialect of Rusyn or a dialect of Ukrainian. In Ukraine, almost all Lemkos speak both Lemko and standard Ukrainian (according to the 2001 Ukrainian Census).[3] Ukraine (unlike neighboring countries) denies Lemkos separate ethnic and linguistic status.[5] In the Polish Census of 2011, 11,000 people declared Lemko nationality, of whom 6,000 declared only Lemko nationality, 4,000 declared double national identity – Lemko-Polish, and 1,000 declared Lemko identity together with a non-Polish identity.[2]

The name "Lemko" derives from the common expression Lem (Лeм), which means "only" in the Lemko dialect, and began to be widely used only since the 19th century.[6][7][8] This word is commonly used in many dialects mainly around eastern Slovakia, Polish and Ukrainian border, and is one distinction between the languages. "Lemko" came into use as an endonym after having been used as an exonym by the neighboring Lyshaks, Boykos and Hutsuls, who do not use that term in their respective dialects. The term in Slovak dialects would be Lemko, in Rusyn dialect it is Lemkiv, in Polish Lemkwich.

Prior to this name, the Lemkos and the Lyshaks described themselves as Rusnaks (Ukrainian: Руснaки, translit. Rusnaky) or Rusyns (Ukrainian: Русини,[7][8] translit. Rusyny)(Ruthenians), as did the rest of the inhabitants of present-day Western Ukraine in the 19th century and first part of the 20th century. In the late 19th and continuing into the early 20th century, in order to differentiate themselves from ethnic Russians, Ruthenians/Rusyns began to use the ethnonym Ukrainians (Ukrainian: Українці, translit. Ukrayintsi). Some Lemkos have accepted the ethnonym, but many consider themselves to be a distinct ethnicity, while some continue to identify themselves as Rusyns. 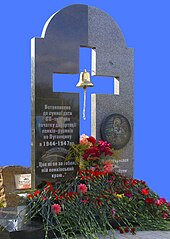 Tablet inscription in Polish (left) and Ukrainian: "In memory of those expelled from Lemkivshchyna, on the 50th anniversary of Operation Vistula, 1947–1997."

Several hypotheses account for the origin of the Hutsuls, however, like all the Rusyns, they most probably have a diverse ethnogenetic origin. The Lemkos (and other Carpatho-Rusyns) are considered to be descendants of the medieval White Croats,[9][10][11][12][13][14][15] affected by the migration of Ruthenian-influenced Slovaks[15] and the Vlach/Romanian migrations in the 14th and 15th centuries.[9][15][16]

Lemkivshchyna became part of Poland in medieval Piast times. Lemkos became an ethnic minority as part of the Austria province of Galicia in 1772.[17] Mass emigration from this territory to the Western hemisphere for economic reasons began in the late 19th century. After World War I, Lemkos founded two short-lived republics, the Lemko-Rusyn Republic in the west of Galicia, which had a russophile orientation, and the Komancza Republic, with a Ukrainophilic orientation.

It is estimated that about 130,000 to 140,000 Lemkos were living in the Polish part of Lemkivshchyna in 1939. Additional depopulation of these lands occurred during the forced resettlement, initially to the Soviet Union (about 90,000 people) and later to Poland's newly acquired western lands (about 35,000) in the Operation Vistula campaign of the late 1940s. This action was a state ordered removal of the civilian population, in a counter-insurgency operation to remove potential support for guerrilla war being waged by the Ukrainian Insurgent Army (UPA) in south-eastern Poland.

While a small number of Lemkos returned (some 5,000 Lemko families returned to their home regions in Poland between 1957–1958,[18] (they were officially granted the right to return in 1956), the Lemko population in the Polish section of Lemkivschyna only numbers around 10,000–15,000 today. Some 50,000 Lemkos live in the western and northern parts of Poland, where they were sent to populate former German villages in areas ceded to Poland. Among those, 5,863 people identified themselves as Lemko in the 2002 census. However, 60,000 ethnic Lemkos may reside in Poland today. Within Lemkivshchyna, Lemkos live in the villages of Łosie, Krynica-Zdrój, Nowica, Zdynia, Gładyszów, Hańczowa, Zyndranowa, Uście Gorlickie, Bartne, Binczarowa and Bielanka. Additional populations can be found in Mokre, Szczawne, Kulaszne, Rzepedź, Turzańsk, Komańcza, Sanok, Nowy Sącz, and Gorlice.

In 1968 an open-air museum dedicated to Lemko culture was opened in Zyndranowa. Additionally, a Lemko festival is held annually in Zdynia. 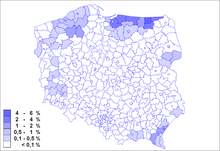 Ukrainians in Poland, 2002. Note strong presence in the Recovered Territories in the north and west, due to forced resettlement during Operation Vistula.

An important aspect of Lemko culture is their deep commitment to Eastern Christianity which was introduced to the Eastern Slavs from Byzantium via Moravia through the efforts of Saints Cyril and Methodius in the 9th century. Originally the Lemkos adhered to Orthodoxy, but in order to avoid latinization directly entered into union with Rome in the 17th century.

Most Lemkos today are Eastern rite or Byzantine-rite Catholics. In Poland they belong to the Ukrainian Greek Catholic Church with a Roman Catholic minority, or to the Ruthenian Catholic Church (see also Slovak Greek Catholic Church) in Slovakia. A substantial number belong to the Eastern Orthodox Church. Through the efforts of the martyred priest Fr. Maxim Sandovich (canonized by the Polish Orthodox Church in the 1990s), in the early 20th century, Eastern Orthodoxy was reintroduced to many Lemko areas which had accepted the Union of Brest centuries before.

The distinctive wooden architectural style of the Lemko churches (as opposed to their neighbouring sub-ethnic groups such as the Boikos) is to place the highest cupola of the church building at the entrance to the church, with the roof sloping downward toward the sanctuary.

The homeland occupied by the Lemkos has been influenced greatly by the languages spoken by neighboring or ruling peoples, so much so that some consider it a separate entity.[19]

Some scholars state that Lemko is the western-most dialect of the Rusyn language,[20][21] which in turn is considered by many Ukrainians to be a dialect of Ukrainian. Lemko speech includes some patterns matching those of the surrounding Polish and Slovak languages, leading some to refer to it as a transitional dialect between Polish and Slovak (some even consider the dialect in Eastern Slovakia to be a dialect of the Slovak language).[citation needed]

Metodyj Trochanovskij developed a Lemko Primer (Bukvar: Perša knyžečka dlja narodnŷch škol, 1935) and a First Reader (Druha knyžečka dlja narodnŷch škol, 1936) for use in schools in the Lemko-speaking area of Poland.[22] In 1934, Lemko was introduced as the language of instruction in schools in the Lemko region. The pupils were taught from textbooks prepared by Trochanovskij and published by the State Publishing House. However, shortly before the outbreak of World War II Polish authorities replaced them with Ukrainian texts.[23] Important fieldwork on the Lemko dialect was carried out by the Polish linguist Zdzisław Stieber before their dispersal.

In the late 20th century, some Lemkos/Rusyns, mainly emigres from the region of the southern slopes of the Carpathians in modern-day Slovakia, began codifying a standard grammar for the Lemko dialect, which was presented on the 27 January 1995 in Prešov, Slovakia. In 2013 the famous novel The Little Prince was translated into Lemko by Petro Krynyckij.[25]

Slovakia has more than 1,000,000 users of local dialects which would commonly use the word lem.

Nikolai Gogol's short story "The Terrible Vengeance" ends at Kriváň, now in Slovakia and pictured on the Slovakian euro, in the heart of Lemkivshchyna in the Prešov Region. Avram Davidson makes several references to the Lemko people in his stories.[26] Anna Bibko, mother-in-law of the protagonist of All Shall Be Well; and All Shall Be Well; and All Manner of Things Shall Be Well,[27] is a Lemko[28] "guided by her senses of traditionalism and grievance, not necessarily in that order".[29]

In the critically acclaimed movie The Deer Hunter the wedding reception scene was filmed in Lemko Hall in the Tremont neighborhood of Cleveland, Ohio, which had a significant immigrant population of Lemkos at one time.[30] The three main character's surnames, however, appear to be Russian (Michael "Mike" Vronsky, Steven Pushkov, and Nikonar "Nick" Chevotarevich) and the wedding took place in St. Theodosius Russian Orthodox Cathedral which is also located in Tremont.

The Lemkos' homeland is commonly referred to as Lemkivshchyna (Ukrainian: Лeмкiвщина, Lemko: Lemkovyna (Лeмкoвина), Polish: Łemkowszczyzna). Up until 1945, this included the area from the Poprad River in the west to the valley of Oslawa River in the east, areas situated primarily in present-day Poland, in the Lesser Poland and Subcarpathian Voivodeships (provinces). This part of the Carpathian mountains is mostly deforested, which allowed for an agrarian economy, alongside such traditional occupations as ox grazing and sheep herding.

The Lemko region became part of Poland in medieval Piast times. Lemkos were made part of the Austria province of Galicia in 1772.[17] This area was part of the Austro-Hungarian Empire until its dissolution in 1918, at which point the Lemko-Rusyn Republic (Ruska Lemkivska) declared its independence. Independence did not last long however, and the republic was incorporated into Poland in 1920.

As a result of the forcible deportation of Ukrainians from Poland to the Soviet Union after World War II, the majority of Lemkos in Poland were either resettled from their historic homeland to the prеviously German territories in the North-Western region of Poland or to the Ukrainian Soviet Socialist Republic.[31] Only those Lemkos living the Prešov Region in present-day Slovakia continue to live on their ancestral lands, with the exception of some Lemkos who resettled in their homeland in the late 1950s and afterward. Lemkos are/were neighbours with Slovaks, Carpathian Germans and Lachy sądeckie (Poles) to the west, Pogorzans (Poles) and Dolinians (a Rusyn subgroup) to the north, Ukrainians to the east, and Slovaks to the south.