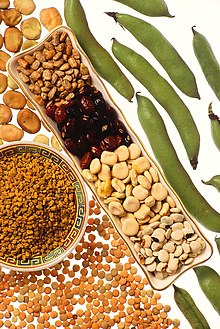 A selection of dried pulses and fresh legumes

A legume (/ˈlɛɡjuːm, ləˈɡjuːm/) is a plant in the family Fabaceae (or Leguminosae), or the fruit or seed of such a plant. The seed is also called a pulse. Legumes are grown agriculturally, primarily for human consumption, for livestock forage and silage, and as soil-enhancing green manure. Well-known legumes include alfalfa, clover, beans, peas, chickpeas, lentils, lupins, mesquite, carob, soybeans, peanuts, and tamarind. Legumes produce a botanically unique type of fruit – a simple dry fruit that develops from a simple carpel and usually dehisces (opens along a seam) on two sides.

Legumes are notable in that most of them have symbiotic nitrogen-fixing bacteria in structures called root nodules. For that reason, they play a key role in crop rotation.

The term pulse, as used by the United Nations' Food and Agriculture Organization (FAO), is reserved for legume crops harvested solely for the dry seed.[1] This excludes green beans and green peas, which are considered vegetable crops. Also excluded are seeds that are mainly grown for oil extraction (oilseeds like soybeans and peanuts), and seeds which are used exclusively for sowing forage (clovers, alfalfa). However, in common usage, these distinctions are not always clearly made, and many of the varieties used for dried pulses are also used for green vegetables, with their beans in pods while young.

Some Fabaceae, such as Scotch broom and other Genisteae, are leguminous but are usually not called legumes by farmers, who tend to restrict that term to food crops.

Archaeologists have discovered traces of pulse production around Ravi River (Punjab), the seat of the Indus Valley Civilisation, dating to c. 3300 BCE. Meanwhile, evidence of lentil cultivation has also been found in Egyptian pyramids and cuneiform recipes.[2] Dry pea seeds have been discovered in a Swiss village that are believed to date back to the Stone Age. Archaeological evidence suggests that these peas must have been grown in the eastern Mediterranean and Mesopotamian regions at least 5,000 years ago and in Britain as early as the 11th century.[3] But one particular bean has become the leading legume planted worldwide, the soybean. It was first domesticated around 11000 BC in China, a descendant of the wild vine Glycine soja.

In the United States, domesticated soybean was introduced in 1804 from France by Benjamin Franklin in Philadelphia. Henry Ford, a vegetarian, was the first person to use soybeans for large-scale industrial purposes. Concentrating on his company, from 1932 to 1933 he invested over 1 million dollars in research on soybeans. Prior to World War II, 40% of cooking oil was imported into the US. When the war came, supply routes were disrupted, which encouraged the soybean culture in the US. Due to the years of research done by Henry Ford, the domestic soybean oil industry was born.[4] Between 1970 and 1976, soybean production increased approximately 30%. Oil yield from bulk soybeans averages about 18%. Its modern-day usage ranges from margarine, salad oils, shortening and the previously mentioned cooking oil.[5] 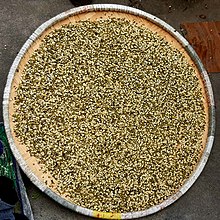 Farmed legumes can belong to many agricultural classes, including forage, grain, blooms, pharmaceutical/industrial, fallow/green manure, and timber species. Most commercially farmed species fill two or more roles simultaneously, depending upon their degree of maturity when harvested. 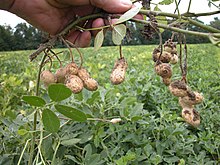 Grain legumes[6] are cultivated for their seeds, which are used for human and animal consumption or for the production of oils for industrial uses. Grain legumes include beans, lentils, lupins, peas, and peanuts.[7]

Legumes are also an excellent source of resistant starch which is broken down by bacteria in the large intestine to produce short-chain fatty acids (such as butyrate) used by intestinal cells for food energy.[9]

Preliminary studies in humans include the potential for regular consumption of legumes in a plant-based diet to reduce the prevalence or risk of developing metabolic syndrome.[10] There is evidence that a portion of pulses (roughly one cup daily) in a diet may help lower blood pressure and reduce LDL cholesterol levels, though there is a concern about the quality of the supporting data.[11][12] 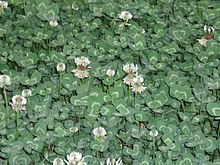 Forage legumes are of two broad types. Some, like alfalfa, clover, vetch (Vicia), stylo (Stylosanthes), or Arachis, are sown in pasture and grazed by livestock. Other forage legumes such as Leucaena or Albizia are woody shrub or tree species that are either broken down by livestock or regularly cut by humans to provide livestock feed. Legume based feeds improve animal performance compared to a diet of perennial grasses. Factors attributed towards this: larger consumption, quicker rate of digestion and feed conversion rate efficiency.[13]

The type of crop(s) grown or animal rearing will be dependent on the farming system, either vegetables, tubers, grains, cattle etc. In cattle rearing, legume trees such as Gliricidia sepium can be planted along edges of field to provide shade for cattle, the leaves and bark are often eaten by cattle. Green manure can also be grown between periods when crops of economic importance are harvested prior to the next crops to be planted.[14]

Legume species grown for their flowers include lupins, which are farmed commercially for their blooms as well as being popular in gardens worldwide. Industrially farmed legumes include Indigofera and Acacia species, which are cultivated for dye and natural gum production, respectively. Fallow/green manure legume species are cultivated to be tilled back into the soil in order to exploit the high levels of captured atmospheric nitrogen found in the roots of most legumes. Numerous legumes farmed for this purpose include Leucaena, Cyamopsis, and Sesbania species. Various legume species are farmed for timber production worldwide, including numerous Acacia species and Castanospermum australe.

Legume trees like the locust trees (Gleditsia, Robinia) or the Kentucky coffeetree (Gymnocladus dioicus) can be used in permaculture food forests. Other legume trees like laburnum and the woody climbing vine wisteria are poisonous.

Depending on the variety, Phaseolus vulgaris (a pulse) may be called "common bean", "kidney bean", "haricot bean", "pinto bean", "navy bean", among other names.

FAO recognizes 11 primary pulses. The FAO notes that the term "pulses" is limited to legumes harvested solely for dry grain, thereby excluding legumes that are harvested green for food (green peas, green beans, etc.) which are classified as vegetable crops. Also excluded are those legumes used mainly for oil extraction (e.g., soybeans and groundnuts) or used exclusively for sowing purposes (e.g., seeds of clover and alfalfa).[15]

Some tropical legumes that are closely self-pollinated are: Macroptilium atropurpureum 'Siratro', Macroptilum lathyroides, Centrosema pubescens, Neonotonia wightii, and Lotononis bainesii. However, the autogamous annual Stylosanthes humilis proved otherwise by adapting in response to changing conditions during an experiment, and was found to be composed of several genotypes showing heterogeneity.

Two legumes used for pasture with cross-pollination are: Desmodium intortum and Desmodium uncinatum. When the flower is opened, this is the only time fertilization will take place. These two species' characteristics vary in morphology and ruggedness.[16]

Root nodules on a Wisteria plant (a hazelnut pictured for comparison)

Many legumes contain symbiotic bacteria called Rhizobia within root nodules of their root systems (plants belonging to the genus Styphnolobium are one exception to this rule). These bacteria have the special ability of fixing nitrogen from atmospheric, molecular nitrogen (N2) into ammonia (NH3).[17] The chemical reaction is:

Ammonia is then converted to another form, ammonium (NH+
4), usable by (some) plants by the following reaction:

This arrangement means that the root nodules are sources of nitrogen for legumes, making them relatively rich in plant proteins. All proteins contain nitrogenous amino acids. Nitrogen is therefore a necessary ingredient in the production of proteins. Hence, legumes are among the best sources of plant protein.

When a legume plant dies in the field, for example following the harvest, all of its remaining nitrogen, incorporated into amino acids inside the remaining plant parts, is released back into the soil. In the soil, the amino acids are converted to nitrate (NO−
3), making the nitrogen available to other plants, thereby serving as fertilizer for future crops.[18][19]

Nitrogen cycle and its stages

In many traditional and organic farming practices, crop rotation involving legumes is common. By alternating between legumes and non-legumes, sometimes planting non-legumes two times in a row and then a legume, the field usually receives a sufficient amount of nitrogenous compounds to produce a good result, even when the crop is non-leguminous. Legumes are sometimes referred to as "green manure".

Sri Lanka developed the farming practice known as coconut-soybean intercropping. Grain legumes are grown in coconut (Cocos nuficera) groves in two ways: intercropping or as a cash crop. These are grown mainly for their protein, vegetable oil and ability to uphold soil fertility.[20] However, continuous cropping after 3–4 years decrease grain yields significantly.[21]

Legumes are widely distributed as the third-largest land plant family in terms of number of species, behind only the Orchidaceae and Asteraceae, with about 751 genera and some 19,000 known species,[22][23] constituting about seven percent of flowering plant species.[24][25]

Seed viability decreases with longer storage time. Studies done on vetch, broad beans, and peas show that they last about 5 years in storage. Environmental factors that are important in influencing germination are relative humidity and temperature. Two rules apply to moisture content between 5 and 14 percent: the life of the seed will last longer if the storage temperature is reduced by 5 degree Celsius. Secondly, the storage moisture content will decrease if temperature is reduced by 1 degree Celsius.[26]

A common pest of grain legumes that is noticed in the tropical and subtropical Asia, Africa, Australia and Oceania are minuscule flies that belong to the family Agromyzidae, dubbed "bean flies". They are considered to be the most destructive. The host range of these flies is very wide amongst cultivated legumes. Infestation of plants starts from germination through to harvest, and they can destroy an entire crop in early stage.[27] Black bean aphids are a serious pest to broad beans and other beans. Common hosts for this pest are fathen, thistle and dock. Pea weevil and bean weevil damage leaf margins leaving charactteristics semi-circular notches. Stem nematodes are very widespread but will be found more frequently in areas where host plants are grown.[28]

The International Year of Pulses 2016 (IYP 2016) was declared by the Sixty-eighth session of the United Nations General Assembly.[31] The Food and Agriculture Organization of the United Nations was nominated to facilitate the implementation of IYP 2016 in collaboration with governments, relevant organizations, non-governmental organizations and other relevant stakeholders. Its aim was to heighten public awareness of the nutritional benefits of pulses as part of sustainable food production aimed towards food security and nutrition. IYP 2016 created an opportunity to encourage connections throughout the food chain that would better use pulse-based proteins, further global production of pulses, better use crop rotations and address challenges in the global trade of pulses.[31][32]