Legislative Assembly of the Northwest Territories

The Legislative Assembly was first known as the Temporary North-West Council and was created in 1870. The first appointments to the council were made on December 28, 1872. The Temporary Council was dissolved in 1876 and a new permanent council was appointed and moved to the new capital of Fort Livingstone in 1876. The council moved to Battleford a year later based on the planned location there of the Canadian Pacific Railway.

The very first election to the Assembly would take place on March 23, 1881, as Lawrence Clarke was elected to represent the electoral district of Lorne. In 1883 the Assembly moved south to Regina based on amendments to the route of the railway. The first territory-wide election took place on September 15, 1885, known as the 1885 Northwest Territories election.

Three years later the first general election took place. All the voting members of the Assembly were elected for the first time, and an elected speaker took office. The Lieutenant Governor still had executive authority however and appointed and ran the cabinet. After the second general election in 1891 the first fully elected Assembly without any appointed members. The Assembly achieved Responsible Government for the first time in October 1897 as the Lieutenant Governor appointed Frederick Haultain as the first Premier to form a government. Robert Brett became the first Leader of the official opposition and party lines were roughly drawn based on Conservatives and Liberals.

The Haultain government lobbied for Government of Canada for provincial powers for the Northwest Territories. In response on September 1, 1905, the provinces of Alberta and Saskatchewan were created by Prime Minister Wilfrid Laurier out of the southern populated portion of the territories.

After the creation of Alberta and Saskatchewan, the remainder of the Northwest Territories was too sparsely populated by enfranchised voters to justify holding elections. The territory reverted to its confederation entry status. A new council was set up in Ottawa consisting of a Commissioner—the effective replacement of the Lieutenant Governor—and four appointed members.

Frederick White was appointed as the first Commissioner and did not recall the council to sit during his time in office. During this time, the Territories were run by the federal Department of Mines and Resources. The first session of the Council of the Northwest Territories took place in 1921. The council members were bureaucrats appointed from the Interior Ministry and were not resident citizens of the territory.

In 1939, the Yellowknife Administration District was created to provide services within 25 miles of Yellowknife. However, it was not until 1947 that John G. McNiven was appointed to represent the district. McNiven was the first member appointed to the council from north of the 60th parallel.

In 1951 the council held its first general election in 49 years. The fifth general election elected three members from the District of Mackenzie. The old council was completely dissolved and five members were appointed along with the three elected representatives.

The council gradually gained more powers back from the federal government as the population in the territory grew. In 1967 the Carrothers Commission moved the territorial capital from Ottawa to Yellowknife and for the first time elected members represented all parts of the territories. In 1975 the Legislative Assembly became fully elected, and the first elected speaker since 1905, David Searle, presided over the Assembly.

The consensus government model has received criticism on various grounds, including that it hampers long-term political and economic development in the territory because the lack of political parties mean that there is no mechanism to carry over a political agenda from one assembly to the next;[4] that it complicates the ability of less wealthy citizens to serve in the assembly because the lack of political parties means that election candidates must raise all of their campaign funds on their own;[5] that it prevents the voters from being able to demand or vote for systemic change, since there is no mechanism to replace an ineffective or underperforming government with another alternative;[4] and that it hampers efforts to improve diversity in representation, such as the election of more women and ethnic minorities to the legislature.[6]

In 2018, MLA Kieron Testart introduced an amendment to the territorial Elections Act to permit the introduction of party politics in the legislative assembly,[7] but his motion received no support from other MLAs and was dropped.[5] In 2019, he planned to organize a group of ideologically aligned MLA candidates in the 2019 Northwest Territories general election into a "Liberal Democratic" slate,[8] but backed off of the plan after it was leaked to the press.[9]

The building that has housed the Northwest Territories Legislative Assembly has changed many times since it was founded. The first building was the original Manitoba Legislature in Fort Garry. After the council moved to Fort Livingstone it was housed in the Swan River Barracks used by the North-West Mounted Police.

The first building built for the needs of the Assembly was NWT Government House in Battleford. That building also served as a residence for the Lieutenant Governor. In 1883 the Assembly moved to Regina. The Territorial Administration building was built to accommodate the growing Assembly and used until 1905.

After the creation of Alberta and Saskatchewan, the capital was moved to Ottawa and the council sessions took place in an office building on Sparks Street. When the council sessions returned to the territories, they were held in any infrastructure suitable as they traveled from community to community.

Interior of the legislative assembly

The territories has fixed election date legislation that ensures elections are held every four years on the first Monday in October.[10]

The legislature since 1905 is a non-partisan body and all members run and sit as independents.

Mace of the Northwest Territories 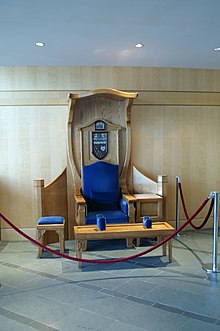 Commissioners chair at the legislative assembly

The seven ministers of the Government of the NWT are found in the Executive Council of the Northwest Territories.