The Legislative Assembly is the Parliament of Samoa based in the capital, Apia, where the country's central administration is situated.

The word fono is a Samoan and Polynesian term for councils or meetings great and small and applies to national assemblies and legislatures, as well as local village councils.

The modern government of Samoa exists on a national level alongside the country's fa'amatai indigenous chiefly system of governance and social organisation.[2] 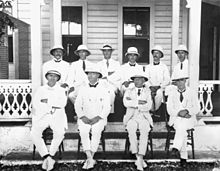 Members of the First Legislative Assembly of Samoa under New Zealand administration, circa 1921.

The Samoan Fono has 49 Members of Parliament. 47 members are matai (traditional heads of families), elected in six two-seat and 35 single-seat constituencies. The other 2 Members are elected by, and represent, individual voters, i.e. "Samoan citizens descended from non-Samoans".[4] An extra Member of Parliament was added after the 2016 election in order to meet the quota of 10% female MPs.[5]

Members of Parliament in Samoa are directly elected by universal suffrage, and serve a five-year term.

The Head of State or O le Ao o le Malo is elected for a five-year term by the Fono.

Elections are held under a simple plurality system. Samoan electors are divided into six two-seat and 35 single-seat constituencies. In addition, two seats are reserved for "individual voters", non-indigenous citizens who may not hold a chiefly title or any customary interest in Samoan land.

Electors must be Samoan citizens and aged over 21.[6] Candidates must be qualified as electors, and in addition those for territorial seats must hold a matai title.[7]

The Fono is responsible for electing the O le Ao o le Malo, the Samoan head of state.

The Fono is currently in its 16th term.

The Fono is housed in a bee-hive shaped building based on the traditional Samoan fale.