State Route 7 (SR 7) is a major primary state highway and busy commuter route in northern Virginia, United States. It travels southeast from downtown Winchester to SR 400 (Washington Street) in downtown Alexandria. Its route largely parallels those of the Washington & Old Dominion Trail (W&OD Trail) and the Potomac River. Between its western terminus and I-395, SR 7 is part of the National Highway System. In 1968, the Virginia State Highway Commission designated the road as the "Harry Flood Byrd Highway" between Alexandria and Winchester to commemorate Harry F. Byrd Sr. (1887–1966).[3]

SR 7 begins downtown in the independent city of Winchester, as East Piccadilly Street at an intersection with US Route 11 (US 11) and US 522, and it continues through the east end of the city, along North East Lane, National Avenue, and finally Berryville Avenue. SR 7 exits the city into surrounding Frederick County, where its name changes to Berryville Pike and it becomes a four-lane highway. SR 7 continues across Interstate 81 (I-81) and then into Clarke County.

SR 7 enters Clarke County from Frederick County, crossing Opequon Creek, and continues towards the town of Berryville. Business SR 7 (SR 7 Bus.) splits off just west of Berryville and passes through the town, while the main route bypasses the town to the north. Both routes cross US 340, and SR 7 Bus. rejoins SR 7 just east of the town. SR 7 crosses the Shenandoah River and its name changes to the Harry Flood Byrd Highway. SR 7 crosses the Loudoun–Clarke county line and the Appalachian Trail at the summit of Snickers Gap in the Blue Ridge Mountains.

SR 7 enters the rural western part of Loudoun County as the Harry Flood Byrd Highway at Snickers Gap, and then it descends out of the Blue Ridge Mountains. It intersects the northern end of the Snickersville Turnpike, and then it passes just north of the village of Bluemont (formerly Snickersville). Next SR 7 curves just south of Jefferson County, West Virginia.

SR 7 continues towards the well-developed eastern half of Loudoun County as a four-lane divided highway with some at-grade intersections, and it passes through Clarke's Gap in Catoctin Mountain. Another SR 7 Bus. splits off on the western side of the town of Leesburg, the county seat of Loudoun County. The main road continues as the Leesburg Bypass, and merges with the bypass of US 15 around the southern side of Leesburg, while the business route passes through town as Market Street. SR 7 Business intersects with US 15 Business (King Street) by the county courthouse in the center of Leesburg.

The Virginia Department of Transportation (VDOT) has plans to widen the section of SR 7 between SR 9 and East Market Street.[4] However, due to highway budget restrictions, this project was put on hold in June 2008.[5] As of December 2014, construction had begun on the widening of this section of SR 7. In addition to widening Westbound SR 7 from two to three lanes, the median will be modified to limit left turns into and out of Roxbury Hall Road, Leeland Orchard Road, Fort Johnston Road, White Gate Place, and Beechnut Place.[6] In addition to the work on SR 7, roundabouts will be installed at the interchange between SR 7 and SR 9. The southern roundabout will combine the separate intersections of the on and off ramps from SR 7 and Colonial Highway/Dry Mill Road into one.[7]

The SR 7 bypass crosses the Washington & Old Dominion Trail just before the US 15 bypass splits off from SR 7 in eastern Leesburg, and then SR 7 Bus. rejoins the main highway near the same location. SR 7 continues on through the eastern half of Leesburg, with six lanes. It then crosses Goose Creek, and passes through Ashburn.

SR 7 was rebuilt as a controlled-access highway through eastern Loudoun County. To accomplish this, highway interchanges were constructed replacing the ordinary intersections at Belmont Ridge Road, Loudoun County Parkway, Riverside Parkway, and Ashburn Village Boulevard while closing the intersection at Lexington Drive. A new overpass was constructed to carry Sycolin Road across SR 7 in Leesburg, which opened to traffic on August 11, 2014.[8]

An additional interchange is planned at [9] Battlefield Parkway in Leesburg.[4]

SR 7 passes by numerous housing subdivisions and businesses before it reaches an interchange with SR 28, close to the Fairfax County line in Sterling.

SR 7 is named Leesburg Pike all the way across Fairfax County, where it is mainly a suburban route. It enters Fairfax County at the interchange with the Fairfax County Parkway (SR 286) and Algonkian Parkway. It continues through Fairfax County, passing by subdivisions and strip malls. It passes through Tysons Corner, where it intersects SR 123 and SR 267, the Dulles Access and Toll Roads. It then intersects the Capital Beltway (I-495) in McLean and intersects I-66 a half mile (0.8 km) west of the West Falls Church Metro station.

SR 7 then enters the independent city of Falls Church and becomes Broad Street and marks the north/south division for city streets. The road intersects US 29 in the city's center and crosses the W&OD Trail in the city's west end. SR 7 then re-enters Fairfax County as Leesburg Pike and passes through Seven Corners, named for the five roads that intersect, including SR 338 (Hillwood Avenue) and US 50 (Arlington Boulevard), which is grade separated from the rest of the intersection. From there, it travels to Bailey's Crossroads, where it intersects SR 244 (Columbia Pike).

SR 7 enters the City of Alexandria from Fairfax County and briefly forms the border between the Alexandria and Arlington County, and then intersects I- 395. It continues as King Street through Alexandria, passing by T. C. Williams High School, George Washington Masonic National Memorial, Union Station (Amtrak and Virginia Railway Express), and the King Street – Old Town Metro station. SR 7 ends at the intersection of King Street and SR 400 (Washington Street) in Old Town Alexandria, one quarter of a mile (0.4 km) west of the Potomac River.

VDOT is currently working on construction at the intersection of SR 7 and Battlefield Parkway in Loudoun County to construct a new single-point urban interchange. The project will cost $77.3 million and is expected to be completed in Fall 2021. [10] Also as a part of the project: [11][12]

On August 19, 2019, a third left-turn lane was added from SR 7 west to Baron Cameron Avenue. [13] This was in place of constructing a partial interchange at the intersection, for which SR 7 east lanes would travel under Baron Cameron Avenue; the project was never started, as it was deemed too expensive. [14]

VDOT is currently working on widening SR 7 from four to six lanes and adding shared-use paths along SR 7 between Reston Avenue and Jarrett Valley Drive in Fairfax County. [15] The project is expected to cost $313.9 million and should be completed by mid-2024. [16] 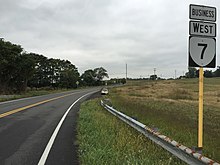 View west at the east end of SR 7 Bus. at SR 7 just east of Berryville

State Route 7 Business (SR 7 Bus.) is a business route in the U.S. state of Virginia. It follows Main Street through downtown Berryville.

View west along SR 7 Bus. at SR 287 in Purcellville

The route's western end is at its parent route, SR 7. It then intersects New Cut Road and Main Street, both part of SR 719. It meets SR 7 once again at a diamond interchange. After that, the route meets State Route 287 (SR 287) at a roundabout. The route's eastern end is at State Route 9 (SR 9) (Charles Town Pike), where it goes east and south as SR 699 (Dry Mill Rd.).[2]

State Route 7 Business (SR 7 Bus.) is a business route in the U.S. state of Virginia. It follows Market Street through downtown Leesburg. In downtown Leesburg, SR 7 Bus. intersects with US 15 Bus.