Infinite Construction - STEAM
This article is about the city in Italy. For the football club, see U.S. Lecce. For people with the surname, see Lecce (surname).
Not to be confused with Leece or Lecco.
Comune in Apulia, Italy 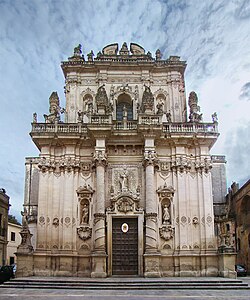 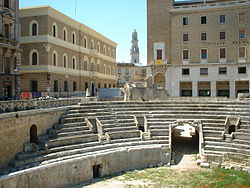 listen), locally [ˈlɛttʃe]; Salentino: Lècce; Griko: Luppìu; Latin: Lupiae; Ancient Greek: Λουπίαι, romanized: Loupíai[5]) is a historic city of 95,766 inhabitants (2015) in southern Italy, the capital of the province of Lecce, the second province in the region by population, as well as one of the most important cities of Apulia. It is the main city of the Salentine Peninsula, a sub-peninsula at the heel of the Italian Peninsula and is over 2,000 years old.

Because of the rich Baroque architectural monuments found in the city, Lecce is commonly nicknamed "The Florence of the South".[6] The city also has a long traditional affinity with Greek culture going back to its foundation; the Messapians who founded the city are said to have been Cretans in Greek records.[7] To this day, in the Grecìa Salentina, a group of towns not far from Lecce, the griko language is still spoken.

In terms of industry, the "Lecce stone"—a particular kind of limestone[8]—is one of the city's main exports, because it is very soft and workable, thus suitable for sculptures. Lecce is also an important agricultural centre, chiefly for its olive oil and wine production, as well as an industrial centre specializing in ceramic production.

According to legend, a city called Sybar existed at the time of the Trojan War, founded by the Messapii. It was conquered by the Romans in the 3rd century BC, receiving the new name of Lupiae.

Under the emperor Hadrian (2nd century AD) the city was moved 3 kilometres (2 miles) to the northeast, taking the name of Licea or Litium. Lecce had a theater and an amphitheater and was connected to the Hadrian Port (the current San Cataldo). Orontius of Lecce, locally called Sant'Oronzo, is considered to have served as the city's first Christian bishop and is Lecce's patron saint.

After the fall of the Western Roman Empire, Lecce was sacked by the Ostrogoth king Totila in the Gothic Wars. It was restored to Roman rule in 549, and remained part of the Eastern Empire for five centuries, with brief conquests by Saracens, Lombards, Hungarians and Slavs.

After the Norman conquest in the 11th century, Lecce regained commercial and political importance (count Tancred of Lecce was the last Norman King of Sicily), flourishing in the subsequent Hohenstaufen and Angevine rule. The County of Lecce was one of the largest and most important fiefs in the Kingdom of Sicily from 1053 to 1463, when it was annexed directly to the crown. From the 15th century, Lecce was one of the most important cities of southern Italy, and, starting in 1630, it was enriched with precious Baroque monuments. To avert invasion by the Ottomans, a new line of walls and a castle were built by Charles V, (who was also Holy Roman Emperor), in the first part of the 16th century.

In 1656, a plague broke out in the city, killing a thousand inhabitants.

In 1943, fighter aircraft based in Lecce helped support isolated Italian garrisons in the Aegean Sea during World War 2. Because they were delayed by the Allies, they couldn't prevent a defeat. In 1944 and 1945, B-24 long-range bombers of the 98th Heavy Bomber Group attached to the 15th U.S. Army Air Force were based in Lecce, from where the crews flew missions over Italy, the Balkans, Austria, Germany and France.

US Lecce crowd at the Stadio Via del Mare

Lecce is home to Serie A (the highest football division in Italy) football club U.S. Lecce. Since 1966, they have played at the 33,786-seater Stadio Via del Mare. 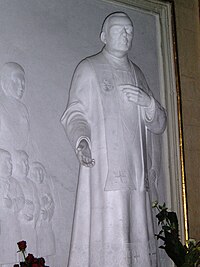 Statue of Lecce-born saint Filippo Smaldone in the city's cathedral

The official sister cities of Lecce are:[12]