Leamington is a municipality in Essex County, Ontario, Canada. With a population of 27,595 in the Canada 2016 Census, it is the second-largest municipality in the Windsor-Essex County area (after the separated municipality of Windsor, Ontario). It includes Point Pelee National Park, the southernmost point of mainland Canada.

Known since the 20th century as the "Tomato Capital of Canada", it is the location of a tomato processing factory owned by Highbury-Canco; founded in 1908, the plant was owned until 2014 by the H. J. Heinz Company. Due to its location in the southernmost part of Canada, Leamington uses the motto "Sun Parlour of Canada".

Leamington was incorporated as a village in 1876, but by 1869, the European-Canadian settlement already had a population of 350.[5] The community was named after Royal Leamington Spa in England, after having originally been called "Gainesville" or "Gainesborough"[6] for local mill owner William Gaines, and before that, Wilkinson Corners.[7] It has had a post office since June 1854.[8]

It was a crossroads hamlet with about 300 residents and was first known for its lumber products rather than tomatoes. There was extensive lumbering in western Ontario, as across the river in Michigan and also upper Michigan. There were several docks, and fish were plentiful in Lake Erie, so much so that sturgeon could be speared from the shore and fish was the cheapest food available.

Leamington was one of the few Canadian municipalities that functioned as a "sundown town," a place where people of colour would face violence or harassment if they were in public after dark.[9][10] In 1930, a group of black parishioners on a visit to Seacliff Park were ordered to leave Leamington by several town administrators.[11] David Suzuki attests that he was told, upon arrival in Leamington in 1946, that “no colored person has ever stayed here beyond sunset.”[12][13]

Leamington was also one of the few Canadian municipalities included in the Negro Motorist Green Book, the American publication listing safe businesses for travelling black people.[14]

In the early hours of June 6, 2010, an F1 tornado ripped through portions of southern Essex County, stretching from Harrow, through Kingsville, to southern Leamington before dissipating near Point Pelee National Park, creating considerable damage, but no loss of life or any direct injuries.[15]

Leamington lies on the 42nd Parallel, the same latitude as Chicago, Boston, the northern border of California, Rome, and Zaragoza. It is located on the north shore of Lake Erie, which acts to moderate its climate.

According to the Canada 2016 Census there were 27,595 people living in Leamington. The Leamington Census agglomeration (metro area) includes Kingsville. Leamington is the most populous urban centre on the Canadian side of Lake Erie, with a slightly larger population than both Fort Erie and Port Colborne.

The majority of people from Leamington speak English. According to the 2006 census, 16,915 speak English only, 8460 male and 8460 female. Around 600 people speak French due to the French school; 10,840 speak other languages, such as German, Spanish and Arabic; and 45 speak English and French.[18]

Residents of Leamington include a population of Lebanese, Portuguese and Italian. Mennonite settlers, whose ancestors immigrated from Russia, have also added to the population.

According to a 2006 survey, 7,485 are immigrants or migrants, and 19,365 people are natives of Canada. The majority of migrants come from Mexico and Jamaica, and are employed as seasonal farm workers through the Temporary foreign worker program in Canada. According to the census, Leamington had the highest percentage of Latin Americans in Canada, with 4.9%.[18] 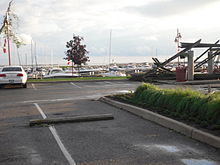 Leamington Marina damage after the tornado of June 6, 2010

Tourism contributes significantly to the economy, and the city has many attractions. Its attractions include cycle paths along the lake and the nearby Point Pelee National Park. It is a major site for migrating birds, especially in the autumn. As such, it plays host to many birdwatchers from Canada, the United States, and around the world. The region is also known for the migration of monarch butterflies, which congregate in the fall at Point Pelee before making their way across Lake Erie on their route to winter quarters in central Mexico. Another important natural area near Leamington is the wetland at Hillman Marsh, located six kilometres east of the town.

Festival of Birds - Every year over 40,000 visitors head to Point Pelee National Park for the Festival of Birds at the beginning of May. Over 300 species of birds migrate through the park every year, providing close up views of birds not seen anywhere else in the country.[20]

Leamington Fair - For over 170 years, the Leamington District Agricultural Society holds the Fair, typically during the 3rd week in June. The Fair features a Midway full of rides and games, a Demolition Derby, and a variety of contests for arts, crafts, livestock, and food in a classic County Fair. [21]

Arts @ The Marina - The South Essex Arts Association/Leamington Arts Centre presents an Annual Outdoor Arts and Crafts Show towards the end of June at the Leamington Municipal Marina.[23]

Hogs For Hospice is an annual motorcycle rally usually held the beginning of August. This is centered around Seacliff Park and includes concerts featuring big name acts, and a weekend long craft and vendor show. Proceeds from the weekend are donated to the Leamington Hospice.

On June 6, 2010, a tornado[24] passed through Leamington, damaging various important landmarks and facilities in town, including the marina.

The town's water tower, visible for kilometres in the flat southern Ontario landscape, is in the shape and colour of a giant tomato. The former tourist information booth in the centre of town is shaped like a large fiberglass tomato.

As noted, Point Pelee National Park contains the southernmost point on mainland Canada and draws thousands of visitors annually. It is on a flyway of migrating birds and one of the largest annual migrations of monarch butterflies.

Leamington has a variety of transportation. Transportation around the city is offered by the Leamington Transit bus system. The city has a small private airport located 4 kilometres (2.5 mi) to the east of town. The town is also connected to the provincial highway network by Highway 3 (to Windsor), and Highway 77 (to Highway 401).

A rail line that Heinz built from its plant to the harbour has been converted to a bicycle path going from the middle of town to the Marina. Two ferries, (MV Pelee Islander and MV Pelee Islander II) owned by the Owen Sound Transportation Company, run on a regularly scheduled seasonal basis from Leamington to Pelee Island with continuing service on to Sandusky, Ohio. 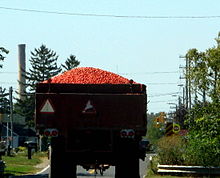 Tomatoes being transported in Leamington. The smoke stack of the former Heinz processing factory can be seen in the distance on the left.

The H. J. Heinz company established a factory in 1908 in Leamington. The Heinz products are shipped from the city with both English and French labels, mostly to the United States. Ketchup and baby food are the main products. In November 2013 Heinz announced that it would close the Leamington plant in 2014, meaning job losses for 740 employees at the plant and hundreds more support workers.[25]

Regional and local businessmen worked to save the plant. A campaign was conducted on Facebook to raise support and funds. As a 54-year-old law in Canada bans the use of tomato paste in tomato juice, thus requiring fresh tomatoes, they arranged a deal whereby Highbury Canco took over the plant in 2014. It produces tomato juice and other products for Heinz. Around 250 workers still process canned products at the over 100-year-old factory.[26]

Leamington has also been known for its greenhouses. It now has the largest concentration of commercial greenhouses in all of North America, with 1,969 acres (797 ha) of greenhouse vegetable production in the general area.[27] Major products of the greenhouse industry, in addition to tomatoes, are peppers, cannabis, cucumbers, roses, and other flowers. Hydroponic farming has been very successfully adopted by many greenhouse operators in Leamington. Historically, tobacco was an important crop in the area. Tobacco production declined in the 1960s and today is virtually nonexistent.

Migrant workers, mostly Mexican and Caribbean seasonal labourers, annually arrive in the region to work in Leamington's greenhouses and farms. Several Mexican and Jamaican shops and a Mexican consulate have opened to serve the migrants.

With the legalization of recreational cannabis coming into effect on October 17, 2018, Leamington has become a hotspot for North America's cannabis production. Aphria, the largest marijuana greenhouse operation in Canada, is traded on the TSX and NYSE and is becoming one of the largest employers in the Municipality.

Erie Shores Healthcare serves the city of Leamington, as well as Essex and Chatham Kent. Opened in 1950, Leamington District Memorial Hospital succeeded two smaller healthcare facilities: Hopewell Hospital (c. 1933) and Cottage Hospital (c. 1920). In mid-December 2016, the hospital formally submitted notice to the Ministry of Health and Long-Term Care, its wishes to change its name to Erie Shores Healthcare and subsequently has been approved.[28][29] Other major healthcare needs can be undertaken in nearby Windsor, Ontario.

Leamington is also served by Weatheradio Canada station VAZ533, transmitting at 162.475 MHz in the weather band.

Prior to 1998, the Essex County Board of Education operated Anglophone secular public schools.

Queen of Peace Catholic Elementary School faced closure in February 2016, but was since converted to Cardinal Carter Catholic Middle School.[32]

Mill Street Public School was permanently closed at the conclusion of the 2016-2017 school year.[33]