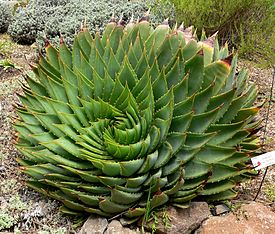 In botany, phyllotaxis or phyllotaxy is the arrangement of leaves on a plant stem (from Ancient Greek phýllon "leaf" and táxis "arrangement").[1] Phyllotactic spirals form a distinctive class of patterns in nature.

The term was coined by Charles Bonnet to describe the arrangement of leaves on a plant.[2]

The basic arrangements of leaves on a stem are opposite and alternate (also known as spiral). Leaves may also be whorled if several leaves arise, or appear to arise, from the same level (at the same node) on a stem. 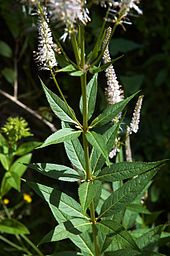 Veronicastrum virginicum has whorls of leaves separated by long internodes.

With an alternate (spiral) pattern, each leaf arises at a different point (node) on the stem. 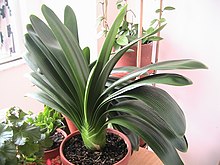 Distichous phyllotaxis, also called "two-ranked leaf arrangement" is a special case of either opposite or alternate leaf arrangement where the leaves on a stem are arranged in two vertical columns on opposite sides of the stem. Examples include various bulbous plants such as Boophone. It also occurs in other plant habits such as those of Gasteria or Aloe seedlings, and also in mature plants of related species such as Kumara plicatilis. 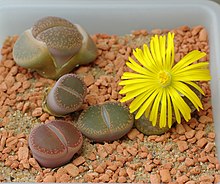 A Lithops species, showing its decussate growth in which a single pair of leaves is replaced at a time, leaving just one live active pair of leaves as the old pair withers

In an opposite pattern, if successive leaf pairs are 90 degrees apart, this habit is called decussate. It is common in members of the family Crassulaceae[3] Decussate phyllotaxis also occurs in the Aizoaceae. In genera of the Aizoaceae, such as Lithops and Conophytum, many species have just two fully developed leaves at a time, the older pair folding back and dying off to make room for the decussately oriented new pair as the plant grows.[4] 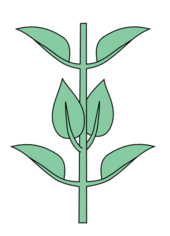 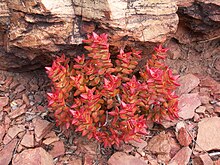 The whorled arrangement is fairly unusual on plants except for those with particularly short internodes. Examples of trees with whorled phyllotaxis are Brabejum stellatifolium[5] and the related genus Macadamia.[6]

A whorl can occur as a basal structure where all the leaves are attached at the base of the shoot and the internodes are small or nonexistent. A basal whorl with a large number of leaves spread out in a circle is called a rosette.

The rotational angle from leaf to leaf in a repeating spiral can be represented by a fraction of a full rotation around the stem.

Alternate distichous leaves will have an angle of 1/2 of a full rotation. In beech and hazel the angle is 1/3, in oak and apricot it is 2/5, in sunflowers, poplar, and pear, it is 3/8, and in willow and almond the angle is 5/13.[7] The numerator and denominator normally consist of a Fibonacci number and its second successor. The number of leaves is sometimes called rank, in the case of simple Fibonacci ratios, because the leaves line up in vertical rows. With larger Fibonacci pairs, the pattern becomes complex and non-repeating. This tends to occur with a basal configuration. Examples can be found in composite flowers and seed heads. The most famous example is the sunflower head. This phyllotactic pattern creates an optical effect of criss-crossing spirals. In the botanical literature, these designs are described by the number of counter-clockwise spirals and the number of clockwise spirals. These also turn out to be Fibonacci numbers. In some cases, the numbers appear to be multiples of Fibonacci numbers because the spirals consist of whorls.

The pattern of leaves on a plant is ultimately controlled by the local depletion of the plant hormone auxin in certain areas of the meristem.[8] Leaves become initiated in localized areas where auxin is absent.[disputed – discuss] When a leaf is initiated and begins development, auxin begins to flow towards it, thus depleting auxin from another area on the meristem where a new leaf is to be initiated. This gives rise to a self-propagating system that is ultimately controlled by the ebb and flow of auxin in different regions of the meristematic topography.[9]

Some early scientists—notably Leonardo da Vinci—made observations of the spiral arrangements of plants.[10] In 1754, Charles Bonnet observed that the spiral phyllotaxis of plants were frequently expressed in both clockwise and counter-clockwise golden ratio series.[11] Mathematical observations of phyllotaxis followed with Karl Friedrich Schimper and his friend Alexander Braun's 1830 and 1830 work, respectively; Auguste Bravais and his brother Louis connected phyllotaxis ratios to the Fibonacci sequence in 1837.[11]

Insight into the mechanism had to wait until Wilhelm Hofmeister proposed a model in 1868. A primordium, the nascent leaf, forms at the least crowded part of the shoot meristem. The golden angle between successive leaves is the blind result of this jostling. Since three golden arcs add up to slightly more than enough to wrap a circle, this guarantees that no two leaves ever follow the same radial line from center to edge. The generative spiral is a consequence of the same process that produces the clockwise and counter-clockwise spirals that emerge in densely packed plant structures, such as Protea flower disks or pinecone scales.

In modern times, researchers such as Mary Snow and George Snow[12] continued these lines of inquiry. Computer modeling and morphological studies have confirmed and refined Hoffmeister's ideas. Questions remain about the details. Botanists are divided on whether the control of leaf migration depends on chemical gradients among the primordia or purely mechanical forces. Lucas rather than Fibonacci numbers have been observed in a few plants[citation needed] and occasionally the leaf positioning appears to be random.

Physical models of phyllotaxis date back to Airy's experiment of packing hard spheres. Gerrit van Iterson diagrammed grids imagined on a cylinder (Rhombic Lattices).[13] Douady et al. showed that phyllotactic patterns emerge as self-organizing processes in dynamic systems.[14] In 1991, Levitov proposed that lowest energy configurations of repulsive particles in cylindrical geometries reproduce the spirals of botanical phyllotaxis.[15] More recently, Nisoli et al. (2009) showed that to be true by constructing a "magnetic cactus" made of magnetic dipoles mounted on bearings stacked along a "stem".[16][17] They demonstrated that these interacting particles can access novel dynamical phenomena beyond what botany yields: a "Dynamical Phyllotaxis" family of non local topological solitons emerge in the nonlinear regime of these systems, as well as purely classical rotons and maxons in the spectrum of linear excitations.

Close packing of spheres generates a dodecahedral tessellation with pentaprismic faces. Pentaprismic symmetry is related to the Fibonacci series and the golden section of classical geometry.[18][19]

In art and architecture

Phyllotaxis has been used as an inspiration for a number of sculptures and architectural designs. Akio Hizume has built and exhibited several bamboo towers based on the Fibonacci sequence which exhibit phyllotaxis.[20] Saleh Masoumi has proposed a design for an apartment building where the apartment balconies project in a spiral arrangement around a central axis and each one does not shade the balcony of the apartment directly beneath.[21]