Lawrence Cannon, PC (born December 6, 1947) is a Canadian politician from Quebec and Prime Minister Stephen Harper's former Quebec lieutenant. In early 2006, he was made the Minister of Transport. On October 30, 2008, he relinquished oversight of Transport and was sworn in as Minister of Foreign Affairs. He was defeated in the 2011 federal election by the NDP's Mathieu Ravignat.[1] He was appointed as Canadian Ambassador to France in May 2012,[2] and he served in that position until September 2017.[3]

Cannon is the son of government lawyer Louis Cannon and Quebec television broadcast pioneer Rosemary "Posie" Power, and the grandson of Lucien Cannon and Charles Gavan Power. He is also the grand-nephew of Lawrence Arthur Dumoulin Cannon, a long-time Liberal politician and Supreme Court judge. He is the great grandson[citation needed] of Sir Charles Fitzpatrick, defender of Louis Riel and former Senior Minister in Laurier's cabinet. He is of Irish and French Canadian descent.

The extended Cannon family has had strong regional and national political influence in Canada for over a century and is considered to be influential as one of Canada's hereditary ruling class families, members having served in positions as lawyers, judges, Supreme Court judges, senators, ministers of defence, solicitors general, and members of parliament. They have had large influence in the national resource industries, as "barons" in the lumber industry particularly, as well as in broadcasting.

The most famous member of the family was Cannon's maternal grandfather, Charles "Chubby" Power, a confidante and Minister of National Defence for Air to Governor General John Buchan, 1st Baron Tweedsmuir in the Cabinet of Prime Minister Mackenzie King.

Cannon grew up fluently bilingual; his father was francophone while his mother was anglophone. He was educated at French speaking public junior and high schools.

He graduated in political science from the Université de Montréal in 1971; and then worked for Liberal Premier Robert Bourassa as correspondence secretary, leaving in 1976 for higher academic studies. Cannon received an MBA from Université Laval in 1979. He worked then in private sector as a financial analyst for Société de développement industriel until 1981; and then as head of Les Radiateurs Roy ltée from September 1981, to December 1985.

Cannon has been a long-time member of the Knights of Columbus.[4]

Cannon then was elected in 1985 as a member of the Quebec Liberal Party to the National Assembly of Quebec for the provincial riding of La Peltrie; and then served as Parliamentary Secretary: notably to the Minister of Foreign Trade and Technological Development, and then Tourism. From October 1990 to January 1994 he was minister for communications, and implemented the 911 emergency system as well as the Privacy Act within Quebec. He was also active with the federal Liberals supporting Sheila Copps (who as well later became Deputy Prime Minister of Canada) in her attempt to win the federal 1990 Liberal leadership election won instead by Jean Chrétien.

Cannon worked in private industry as vice-president of Unitel; now AT&T Canada Corp. during the AT&T takeover of the Canadian firm; and in other concerns between 1994 and 2001 primarily in the field of information technologies. Cannon then remarried; and took an interest in Quebec local politics building a new constituency.

Cannon was elected as councillor for Gatineau City Council in 2001, representing Hull's Val-Tétreau District, under mayor Yves Ducharme. He served as president of the Société de Transport de l'Outaouais from January 2002 to November 2005, while at the same time he was appointed president of the Association du transport urbain du Québec. He had an especial sympathy for solving transport problems in Gatineau by road building rather than public transit approaches. During his mandate, the STO developed a BRT (Bus Rapid Transit) project called "Rapibus", that has since been completed. His association and ownership of Groupe Cannon and Associates, a consulting company in telecommunications, has received little attention, and this ownership is expected to be put in a blind trust as is usual in federal politics.

Cannon travelled extensively in Europe and the Americas both in and out of public life. In 2001, Cannon was appointed to the Board of the World Commerce Institute, and then as president and general manager of AmeriContact for the Quebec City Summit of the Americas in Quebec City. 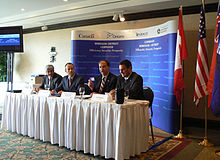 Cannon at a June 2008 announcement on border safety

Cannon standing next to Haitian Prime Minister Jean-Max Bellerive (left) and U.S. Secretary of State Hillary Clinton in Montreal at an emergency relief summit on the 2010 Haiti earthquake

Although Cannon and his family have historically supported the federal Liberals, he switched to the Conservative Party of Canada in the early 2000s. At the time, his switch to the Conservative Party raised eyebrows among the political class and the media, which generally attributed the move to his inability to make an impression with the Liberal Party. On September 16, 2005, he was named deputy chief of staff and deputy executive director of the Conservative Party. He was also named as Quebec lieutenant to party leader Stephen Harper.

He successfully ran as a Conservative candidate in the riding of Pontiac in the 2006 federal election, beating incumbent Liberal M.P. David Smith. Winning with 33.68% of the vote, Cannon gained support from traditional Liberal voters. The Liberals had held the riding and its predecessors for all but nine years since 1935, and the Conservative candidate had finished a distant third in 2004 with 22.15% of the vote.

Many pundits had predicted that Cannon would also be named Deputy Prime Minister of Canada, but Harper chose not to retain that office. However, Cannon was first on the list of ministers designated to fill in for Harper if he was unable to perform his duties, making him Deputy Prime Minister in practice if not in name. This was further emphasized when Cannon seconded the pro forma bill to start the first session of the 39th Canadian Parliament; the bill is introduced before the House takes the Speech from the Throne under consideration to maintain the right of the House to consider matters other than those directed to it by the crown. This bill is normally proposed by the Prime Minister and seconded by either the Deputy Prime Minister or the Government House Leader.[6]

Following the 2008 federal election, Cannon was appointed as Minister of Foreign Affairs. Cannon was one of the higher-ranking Red Tories in the Harper cabinet. In 2009, he denied diplomat Richard Colvin's claim that Afghan prisoners transferred from the Canadian forces to the Afghan police were tortured.[7]

Cannon was defeated in the 2011 election by NDP challenger Mathieu Ravignat, winning only 29.5 percent of the vote. His place as Minister of Foreign Affairs was taken by John Baird.

On May 10, 2012, Prime Minister Stephen Harper appointed Cannon as Canadian Ambassador to France.[2] He served in that position until September 2017,[3] when he was succeeded by Isabelle Hudon.[8]

In June 2009, after being asked whether the Canadian government will "choose not to abandon Ronald Allen Smith, a Canadian who has been on death row in Montana for over 25 years", Cannon answered "(...) I will be very clear on this, clemency is not an obligation. It must be earned. We will study each appeal for clemency individually."[9]

On September 21, 2009, Canadian Abousfian Abdelrazik sued Cannon for $3-million alleging misfeasance in public office, intentional infliction of mental suffering, and violation of Abdelrazik's constitutional rights under ss. 6, 7 and 12 of the Canadian Charter of Rights and Freedoms, resulting from Canada's refusal to grant him travel documents to return home, his alleged torture while in detention in Sudan, and his interrogation in Sudan by Canadian Security Intelligence Service (CSIS) agents while in Sudanese custody.[10][11] On August 30, 2010, the Federal Court refused a motion by Canadian government lawyers seeking to prevent the suit against Cannon from proceeding.[12]