Enlarge Montreal Rivière des Mille Îles
This article is about the municipality. For the islands forming a part of it, see Îles Laval.
City and Administrative region in Quebec, Canada

The first European Settlers in Laval were Jesuits, who were granted a seigneury there in 1636. Agriculture first appeared in Laval in 1670. In 1675, François de Montmorency-Laval gained control of the seigneury. In 1702 a parish municipality was founded, and dedicated to Saint-François de Sales (not to be confused with the modern-day Saint-François-de-Sales in Saguenay–Lac-Saint-Jean).

In 1845, after nearly 200 years of being a rural nature, additional municipalities began to be created. The only built-up area on the island, Sainte-Rose, was incorporated as a village in 1850, and it remained the main community for the remainder of the century. With the dawn of the 20th century came urbanization. Laval-des-Rapides became Laval's first city in 1912, followed by L'Abord-à-Plouffe, which was granted village status three years later. Laval-sur-le-Lac was founded in the same year and had its tourist-based economy based on Montrealers. Laval began to grow throughout the following years because its proximity to Montreal made it an ideal suburb.

To deal with problems caused by urbanization, amalgamations occurred; L'Abord-à-Plouffe amalgamated with Renaud and Saint-Martin, creating the city of Chomedey in 1961. The amalgamation turned out to be so successful for the municipalities involved that the Quebec government decided to amalgamate the whole island into a single city of Laval in 1965, not without controversy.[6] Laval was named after the first owner of Île Jésus, François de Montmorency-Laval, the first Roman Catholic Bishop of Quebec. At the time, Laval had a population of 170,000. Laval became a Regional County Municipality in 1980. Until then, it had been the County of Laval.[7]

The 14 municipalities, which existed prior to the incorporation of the amalgamated City of Laval on 6 August 1965, were:

The island has developed over time, with most of the urban area in the central region and along the south and west river banks.

The city's longtime mayor, Gilles Vaillancourt, resigned on 9 November 2012, following allegations of corruption made against him in hearings of the provincial Charbonneau Commission.[14] City councillor Basile Angelopoulos served as acting mayor[15] until Alexandre Duplessis was selected in a council vote on 23 November.[16] Duplessis, in turn, stepped down after just seven months in office after facing allegations of being implicated in a prostitution investigation;[17] he was succeeded by city councillor Martine Beaugrand until the city's current mayor, Marc Demers, was elected in the 2013 municipal election.

Past mayors have been:

On 3 June 2013, the provincial government of Pauline Marois placed the city under trusteeship due to the ongoing corruption scandal affecting the city.[18] Florent Gagné, a former head of the Sûreté du Québec, will serve as the city's head trustee, with responsibility for reviewing and approving or rejecting all decisions made by city council.[18] Municipal Affairs Minister Sylvain Gaudreault said that Laval's Mayor Alexandre Duplessis and his council will continue to serve, but council decisions must be approved by the trustees.[19] Duplessis, in turn, resigned as mayor on 28 June 2013, after being implicated in a separate prostitution allegation.[17]

On a white-yellow background, the emblem of Laval illustrates the modernism of a city in full expansion. The sign of the city symbolizes the "L" of Laval.

The colours also have a significant meaning :

The "L" of Laval is made of cubes that represent the development of Laval.

The letters of the Laval signature are related one to the other to point out the merger of the 14 municipalities of Jesus island in 1965.

Politically, Laval has been historically a battleground area between the Quebec separatist parties (the Bloc Québécois federally and the Parti Québécois provincially) and the federalist parties (various parties federally and the Quebec Liberal Party provincially). The only exception is Chomedey in the south, which voted overwhelmingly to not separate in the 1995 Quebec referendum.

The other parts of Laval have drifted to the provincial Liberals in recent years. While the PQ held every Laval riding except Chomedey during their second stint in government between 1994 and 2003, the Liberals won every Laval riding in 2003, 2007, and 2008. During the 2012 election, the PQ saw some gains in Laval when they captured 2 seats, but both returned to the Liberal fold during the 2014 election. 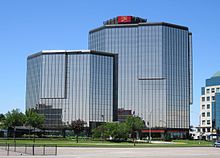 Laval's diverse economy is centred around the technology, pharmaceutical, industrial and retail sectors. It has many pharmaceutical laboratories but also stone quarries and a persistent agricultural sector. Long seen as a bedroom community, Laval has diversified its economy, especially in the retail sector, developing numerous shopping malls, warehouses and various retail stores. Laval has four different industrial parks.[21]

The first is Industrial Park Centre, in the heart of Laval at the corner of St. Martin West and Industriel Blvd. One of the largest municipal industrial parks in Quebec, the Industrial Park Centre boasts the highest concentration of manufacturing companies in Laval: 1,024 at last count, and 22,378 employees. The park still has 1,300,643 m2 (14,000,005 sq ft) of space available.

The second, the Autoroute 25 Industrial Park is at the crossroads of the metropolitan road network. Inaugurated in 2001, this new industrial municipal space has been a tremendous success, boasting an 80% occupancy rate. Laval is studying the possibility of expanding this park in the next few years.

The third, known as Industrial Park East, is in the neighbourhood of Saint-Vincent-de-Paul. This park has reached full capacity with a 100% occupancy rate. Industrial Park East is currently part of a municipal program to revitalize municipal services and public utilities. Laval is working with a private developer on an expansion project for the park that should be announced in the near future.

Created in 1995, Laval Technopole is a nonprofit organization that has the objective to promote the economic growth of Laval by attracting and supporting new business and investments located in its 5 territory poles: Biopole, e-Pol, Agropole, industrial pole and Leisure/tourism.

Alimentation Couche-Tard has its headquarters in Laval.[22]

Laval was the host-city of the "Jeux du Québec" held in summer 1991 and of the Canadian Hockey League's 1994 Memorial Cup. Laval became home to the Montreal Canadiens' American Hockey League affiliate the Laval Rocket, starting in the 2017–18 season.[24] 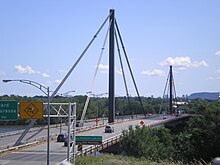 The Papineau-Leblanc Bridge links Laval to the Ahuntsic-Cartierville borough of Montreal. 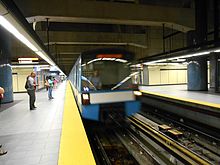 A train arriving at Montmorency Station in the Montreal Metro.

In April 2007, the Montreal Metro was extended to Laval with three stations. The long-awaited stations were begun in 2003 and completed in April 2007, two months ahead of the revised schedule, at a cost of C$803 million, funded entirely by the Quebec government. The stations are Cartier, De La Concorde, and Montmorency. The arrival of the Metro in Laval was long-awaited as it was first promised in the 1960s.[citation needed] Former mayor, Gilles Vaillancourt, announced his wish to loop the Orange line from Montmorency to Côte-Vertu stations with the addition of six new stations (three in Laval and another three in Montreal). He proposed that Transports Quebec, the provincial transport department, set aside C$100 million annually to fund the project, which was expected to cost upwards of $1.5 billion.[28]

The Réseau de transport métropolitain (RTM) operates two commuter train lines on the island. The Deux-Montagnes and Saint-Jérôme lines connect Laval to downtown Montreal in as little as 30 minutes. Including De la Concorde, there are currently five train stations.

On the Deux-Montagnes line, there are two stops in Laval, Île-Bigras and Sainte-Dorothée. On the Saint-Jérôme line there are three stations in Laval, De la Concorde, Vimont and Sainte-Rose.

There are reserved lanes for buses and taxis on Chomedey Blvd between Le Carrefour Blvd and the Des Prairies River (Lachapelle Bridge) and beyond as well as along boulevard des Laurentides between rue Proulx and boulevard Cartier (the reserved lane, in this case for buses only, continues onto the Pont Viau bridge into Montreal until the Terminus Laval at the Henri-Bourassa Metro station). Most buses that use the reserved lane end their journey at the Cartier Metro station. The AMT and the City of Laval have developed reserved bus and taxi lanes on Notre-Dame Boulevard between Vincent Massey Street and Place Alton-Goldbloom and another on De la Concorde Blvd between De l'Avenir and Laval Blvds, as well as between Ampere Ave and Roanne St. These reserved lanes (Notre-Dame and De la Concorde are the same boulevard but change name where they meet under Autoroute 15) opened shortly after 31 October 2007. 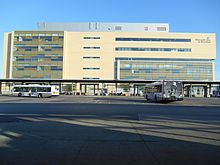 The Laval campus of the Université de Montréal.

Laval is home to a variety of vocational/technical centres, colleges and universities, including:

North Star Academy Laval is the only private English high school in Laval. They offer secondary 1 to 5 and the possibility to do a grade 12 diploma from Ontario via their online platform. 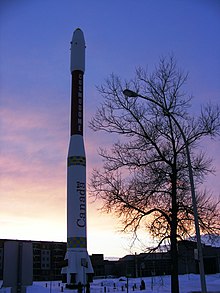 The Cosmodome is a major local attraction.

Laval is served by media from Montreal, however it does have some of its own regional media outlets.