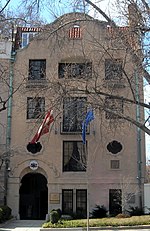 Embassy of Latvia in Washington, D.C.

The United States established diplomatic relations with Latvia on July 28, 1922. The U.S. Legation in Riga was officially established on November 13, 1922, and served as the headquarters for U.S. representation in the Baltics during the interwar era. The Soviet invasion forced the closure of the legation on September 5, 1940, but Latvian representation in the United States has continued uninterrupted for 85 years. The United States never recognized the forcible incorporation of Latvia into the U.S.S.R. and views the present government of Latvia as a legal continuation of the interwar republic.

The U.S. Embassy in Latvia is located in Riga.