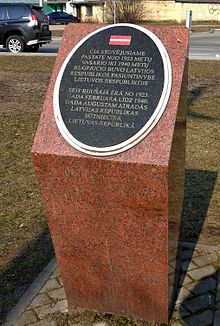 Both states share a long common history: both Latvians and Lithuanians belong to the family of Baltic peoples, speakers of the Baltic languages. The territory of Latvia and Lithuania were together part of the Grand Duchy of Lithuania and the Polish-Lithuanian Commonwealth between 1561 and 1772 (with a brief period of Swedish rule in what is now Latvia in between). Between the late 18th century and 1918, the territory of both Lithuania and Latvia was part of the Russian Empire. Lithuania and Latvia re-established their diplomatic relations on October 5, 1991, after independence from the Soviet Union.

The two states share 588 kilometres (365 mi) of common border. Both countries are full members of the European Union.

In the early 1920s, Latvia and Lithuania had a peaceful dispute about the towns of Palanga and Šventoji which were initially part of Latvia following the country's independence but were of strategic interest to Lithuania. The dispute was peacefully resolved in 1921 with the help of an international commission, and the territories were transferred to Lithuania. As a compensation, Latvia received the Latvian-majority territories of what now are Ukri Parish, Brunava Parish, Aknīste Parish. Latvia's claims on the town of Mažeikiai were rejected by the international commission. The Lithuanians had to drop their claims on Ilūkste Municipality and Daugavpils.[1]