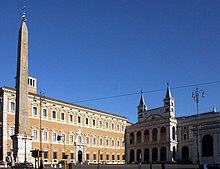 St. John in Lateran square with the Lateran Palace (left) and the Archbasilica of Saint John Lateran (right) and the Obelisk of Thutmosis III in front

Located on St. John's Square in Lateran on the Caelian Hill, the palace is adjacent to the Archbasilica of Saint John Lateran, the cathedral church of Rome. From the fourth century, the palace was the principal residence of the popes, and continued so for about a thousand years until the Apostolic Residence ultimately moved to the Vatican. The palace is now used by the Vatican Historical Museum, which illustrates the history of the Papal States. The palace also houses the offices of the Vicariate of Rome, as well as the residential apartments of the Cardinal Vicar, the pope's delegate for the daily administration of the diocese. Until 1970, the palace was also home to the important collections of the Lateran Museum, now dispersed among other parts of the Vatican Museums.

Following the Lateran Treaty of 1929, the palace and adjoining basilica are extraterritorial properties of the Holy See.[Notes 1]

The site on which the Basilica di San Giovanni in Laterano sits was occupied during the early Roman Empire by the domus of the Plautii Laterani family. The Laterani served as administrators for several emperors; their ancestor Lucius Sextius Lateranus is said to have been the first plebeian to attain the rank of consul, in 366 BC. One of the Laterani, Consul-designate Plautius Lateranus, became famous for being accused by Nero of conspiracy against the emperor. The accusation resulted in the confiscation and redistribution of his properties.[1]

Main article: Constantine I and the bishops of Rome

The Domus Laterani came into the possession of the emperor when Constantine I married his second wife Fausta, sister of Maxentius. Around 312, Constantine had razed the imperial horse-guards barracks adjoining the palace, which was known as Domus Faustae or "House of Fausta" by this time; the equites singulares Augusti had supported Maxentius against Constantine. He commissioned the construction of the Basilica di San Giovanni in Laterano on the site.[2] The Domus was eventually given to the Bishop of Rome by Constantine. The actual date of the gift is unknown but scholars believe it had to have been during the pontificate of Pope Miltiades, in time to host a synod of bishops in 313 that was convened to challenge the Donatists.[1] 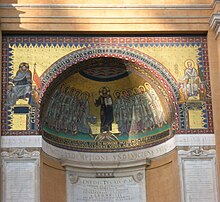 Copy of the Byzantine mosaics that used to be on the apse of the Leonian Triclinium, one of the main halls of the ancient Lateran palace

As Byzantium grew less able to help prevent Lombard incursions, the papacy became more independent of the Empire. Prior to the early eighth century, the residence of the bishops of Rome was not called a palace, but rather the "Lateran patriarchate".[3] The incentive to refurbish the Lateran patriarchate as a true palace was to create an imperial residence from which the pope could exercise not only spiritual but also temporal authority.[4]

The pope's palace at the Lateran in Rome was extensively added to in the late eighth century by Pope Hadrian I (772–95) and Pope Leo III (795–816), who built an enormous triclinium. It was one of the most famous halls of the ancient palace and was the state banqueting hall, lined with mosaics. Nothing remains of this, but in 1743 copies of the mosaics were made from drawings and placed in a specially built structure opposite the palace. The existing structure is not ancient, but a representation of the original mosaics is preserved in a three-part mosaic: In the centre Christ gives their mission to the Apostles; on the left he gives the keys to St. Peter and the Labarum to Constantine; while on the right St. Peter gives the stole to Leo III and the standard to Charlemagne, an image meant to represent the Frankish king's duty to protect the Church.[4]

The triclinium and the sala del concilio, an oblong hall with apse mosaic and five ornate niches on each side, were built around 800 to serve as the heart of papal ceremonial. Architecturally they were reminiscent of Byzantine imperial buildings in Constantinople.[4]

Base of obelisk with citation of Emperor Constantine I

In the tenth century Sergius III restored the palace after a disastrous fire, and later it was greatly embellished by Innocent III. This was the period of its greatest magnificence, when Dante speaks of it as beyond all human achievements. At this time the centre of the piazza was occupied by the palace and tower of the Annibaldi family.

Between this palace and the Lateran basilica was the equestrian statue of Marcus Aurelius, which at the time was erroneously believed to represent the Christian Emperor Constantine (which association probably accounted for its preservation). A copy of the equestrian statue is now placed in the centre of the Capitoline Square while the original has been safely preserved for display in the Capitoline Museums.

In its place, the Lateran obelisk was erected. Originally commissioned by the 18th dynasty Pharaoh Tuthmosis III, it was completed by his grandson, Tuthmosis IV. At 32.18 m (45.70 m including the base) it is the tallest obelisk in Rome and the largest standing ancient Egyptian obelisk in the world, weighing over 230 tons. Following the annexation of Egypt to the Empire, it was taken from the temple of Amun in Karnak[Notes 2] and brought to Alexandria with another obelisk by Constantius II. From there it was brought on its own to Rome in 357 to decorate the spina of the Circus Maximus. The dedication on the base, however, gives the glory to Constantine I, not to his son who brought it to Rome.

The whole of the front of the palace was taken up with the Aula Concilii ("Hall of the Council"), a magnificent hall with eleven apses, in which were held the various Councils of the Lateran during the medieval period. The private apartments of the popes in this palace were situated between the triclinium and the city walls.

The Lateran during medieval times, from a 17th-century engraving by Giovanni Giustino Ciampini 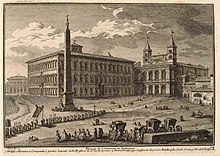 The Lateran after its reconstruction, from an 18th-century engraving by Giuseppe Vasi

The fall of the palace from this position of glory was the result of the departure of the popes from Rome during the Avignon Papacy.

Two destructive fires, in 1307 and 1361, did irreparable harm, and although vast sums were sent from Avignon for the rebuilding, the palace never again attained its former splendour. The palace had Gothic architectural elements at this point. When the popes returned to Rome they resided first at Basilica di Santa Maria in Trastevere, then at Basilica di Santa Maria Maggiore, and lastly fixed their residence at the Vatican. St. Peter's Basilica, also built by Constantine, had until then served primarily as a pilgrimage church. Sixtus V, more concerned with rationalized urban planning than the preservation of antiquities, then destroyed what still remained of the ancient palace of the Lateran in 1586 preserving only the Sancta Sanctorum, and erected the present much smaller edifice in its place, designed by his favorite architect Domenico Fontana.[2]

The architect he employed, immediately upon his election, was Domenico Fontana, who was engaged in alterations to the basilica at the same time. Fontana's strong, restrained style was influenced by Giacomo Vignola and modeled upon Palazzo Farnese for its regular and harmonious if somewhat bland major façade. Fontana's sound engineering basis and power of coordinating a complicated architectural program on a tightly constrained site, which Sixtus urged forward at top speed, have been considered remarkable.[5]

A notice on 29 August 1589 announced that the work had been completed: "A great palace in Piazza Lateranese has been brought to completion by Sixtus V."[5] Fontana reapplied motifs of the Lateran Palace in the part of the Vatican Palace containing the present papal apartments, which he undertook later, and in his additions to the Quirinal Palace. The east front was finished under Clement XII, who surmounted it with his coat-of-arms in 1735.

From the old Lateran constructions three monuments survive, two of which are located in one building built by Domenico Fontana in 1589 opposite the Lateran Basilica. These monuments are the Scala Santa and the Chapel of the Sancta Sanctorum.

The Lateran remained in a suburban environment, surrounded by gardens and vineyards, until the growth of modern Rome in the later nineteenth century. Its site was considered unhealthy in Rome's malarial summers, however. In the late seventeenth century, Innocent XII located, in a part of it, a hospice for orphans who were set to work in a little silk manufactory. In the nineteenth century, Gregory XVI and Pius IX founded at the Lateran a museum of religious art and pagan culture for overflow from the Vatican galleries.

In 1925 Pius XI established an ethnographic museum devoted to artifacts sent back by missionaries. On 11 February 1929, the Lateran Treaty was signed here, at last regulating the relations between the Holy See and the Italian State. It established that both the basilica and the Lateran Palace were extraterritorial properties of the Holy See, enjoying privileges similar to foreign embassies on Italian soil.[Notes 1]

During the Second World War, the Lateran and its related buildings provided a safe haven from the Nazis and Italian Fascists for numbers of Jews and other refugees. Among those who found shelter there were Alcide De Gasperi, Pietro Nenni, Ivanoe Bonomi and others. The Daughters of Charity of Saint Vincent de Paul and the sixty orphan refugees they cared for were ordered to leave their convent on the Via Carlo Emanuele. The Sisters of Maria Bambina, who staffed the kitchen at the Pontifical Major Roman Seminary at the Lateran offered a wing of their convent. The grounds also housed Italian soldiers.[6]

Fathers Vincenzo Fagiolo and Pietro Palazzini, vice-rector of the seminary, were recognized by Yad Vashem for their efforts to assist Jews.[7][8]

Seat of the Vicariate of Rome

Pope John XXIII returned to the palace some pastoral functions by fixing here the seat of the vicariate and offices of the Diocese of Rome. The same pope removed the collections of the Lateran Museum to the Vatican. The Lateran Palace is now also occupied by the Museo Storico Vaticano, which illustrates the history of the Papal States. It was moved to the palace in 1987 and opened to the public in 1991.

On 27 July 1992, a bomb explosion devastated the facade of the Rome Vicariate at the Archbasilica of Saint John Lateran. The attack is widely assumed to have been the work of the Italian Mafia, a warning against Pope John Paul II's frequent anti-Mafia statements. Repairs were completed in January 1996.[2]

As for the present pastoral functions of the palace, it today houses the offices of the Vicariate of Rome, as well as the living quarters of the Cardinal Vicar General of His Holiness for the Diocese of Rome.

Tourists can visit the papal apartments, usually in the morning.

In Assassin's Creed: Brotherhood (2010), the basilica of the palace is presented as a dilapidated structure which holds a scroll of Romulus.