The National Shrine Basilica of Our Lady of Las Lajas (Spanish: Basílica Santuario Nacional de Nuestra Señora de las Lajas), commonly called Las Lajas Shrine (Santuario de Las Lajas), is a basilica church located in the southern Colombian Department of Nariño, in the municipality of Ipiales, and is built inside the canyon of the Guáitara River.

The present church was built in a Gothic style between 1916 and 1949, taking up a total time frame of 33 years to build. The name Laja (slab) comes from the name of a type of flat sedimentary rock similar to shale and slate.

The inspiration for the church's creation was a purported miraculous event in 1754, when Amerindian Maria Meneses de Quiñones and her deaf-mute daughter Rosa were caught in a very strong storm. The two sought refuge between the gigantic Lajas, when, to Meneses' surprise, her daughter Rosa exclaimed "the Mestiza is calling me" and pointed to the lightning-illuminated silhouette over the laja. This apparition of the Virgin Mary instigated popular pilgrimage to the site and occasional reports of cases of miraculous healing. The image on the stone is still visible today.

The existence of a shrine in this location was recorded in the accounts of friar Juan de Santa Gertrudis' journey through the southern region of the New Kingdom of Granada between 1756 and 1764. The first shrine was built here in the middle of 18th century from straw and wood. It was replaced with a new, larger shrine in 1802, which in turn was extended and connected to the opposite side of canyon with a bridge.

The Shrine of Our Lady of Las Lajas is a Roman Catholic basilica church dedicated to the veneration of Our Lady of Las Lajas Ipiales. It is located in southern Colombia and has been a tourism and pilgrimage destination since the eighteenth century. The Spanish Franciscan Juan de Santa Gertrudis (1724–1799) mentions the sanctuary in Book III, Part 2, of his four-volume chronicle of his 1756–62 journey in the south portion of the Kingdom of New Granada (titled "Wonders of Nature"). This is possibly the oldest reference to its existence. 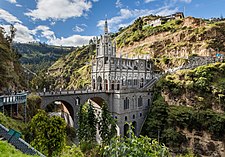 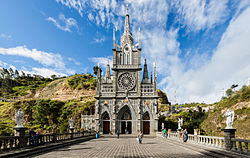 The Las Lajas Sanctuary in southwest Colombia has made a name for its stunning architecture and a series of legends involving the appearance of the Holy Virgin and a mysterious mural of which nobody knows the origins. Located in the southwestern Colombian state of Nariño, the Las Lajas Sanctuary sits on a 130 feet tall bridge built over the Guaitara river at less than seven miles from the Ecuadorian border. The neo-Gothic church was erected by worshipers between 1916 and 1953 and replaced a shrine first built in the mid-18th century. 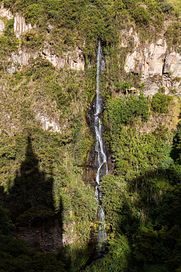 The cascada, a small waterfall that falls down in different ledges. 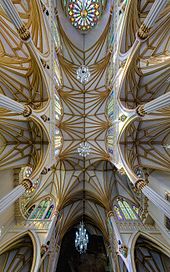 Ornate ceiling of a nave, or the central part of a church.

According to popular belief, the Virgin Mary appeared to a woman and her deaf-mute daughter in 1754 at exactly the same place where the church is now standing. The woman, Maria Meneses de Quiñones, and her daughter, Rosa, were passing by the Guaitara river when they found themselves hiding from a storm. At that moment, Rosa shouted "Mum, the Virgin is calling me!" and pointed to the appearing virgin. The woman kept quiet about the miracle until something even more incredible happened. When Rosa died, Mueces returned to the place where they had seen Virgin Mary to pray for her daughter's soul. The virgin then miraculously revived Rosa, and mother and daughter could no longer keep the miracle a secret. The first shrine in the honor of Jesus's mother was built a few years after the alleged appearance, according to the journal of a friar who was traveling the region between 1756 and 1764. Half a century later, in 1802, a bigger shrine was built and worshipers erected the first version of the bridge that now allows access to the church.

The miraculous appearing of the virgin is only the first of a number of legends and mysteries linked to the Las Lajas Sanctuary. For example, nobody knows who made the image of the Virgin Mary that is at the end of the church, behind the altar. According to some, the image was seen first when Mueces wanted to show a priest and other locals where her daughter had been revived. On arrival, the worshipers saw the image of the Virgin Mary and Jesus carved in a stone wall. The image attracts thousand of pilgrims every year. Las Lajas received canonical coronation from the Vatican in 1952 and was made a minor basilica in 1994.[1]