Larnaca (Greek: Λάρνακα [ˈlarnaka]; Turkish: Larnaka) is a city on the southern coast of Cyprus and the capital of the eponymous district. It is the third-largest city in the country, after Nicosia and Limassol, with a metro population of 144,200 in 2015.[2]

Larnaca is known for its palm-tree seafront also called Foinikoudes as well as the Church of Saint Lazarus, Hala Sultan Tekke, Kamares Aqueduct, and Larnaca Castle. It is built on the ruins of ancient Citium, which was the birthplace of Stoic philosopher Zeno. Larnaca is home to the country's primary airport, Larnaca International Airport. It also has a seaport and a marina.

The word Larnaca derives from the Greek n. larnax, meaning: "coffer", "box", "chest", e.g. for household stores, "cinerary urn", "sarcophagus" or "coffin"; "drinking trough" and "chalice". An informal etymology, attributes the origin of the name to (sarcophagi) that were found in the area.[3] Sophocles Hadjisavvas, a state archeologist, states that "[the city's U.S.] consul of the last quarter of the 19th century, claimed to have explored more than 3,000 tombs in the area of Larnaca, so-called after the immense number of sarcophagi found in the modern town".[4] In the vernacular, Larnaca is also known as Scala (Greek: Σκάλα [ˈskala] from the word (Greek: σκάλα [ˈskala] a loanword from the Italian scala). During the Middle Ages, until the end of the 18th century, a small port-anchorage close to Larnaca Bay is referred to on maps, engravings, in travel descriptions and documents as Scala di Saline and may account for this second name; other names that appear on maps are include: Porto delle Salines, Rada delle Saline, Ponta delle Saline, Punta delle Salino, Golfo delle Saline, Port Salines, Selines, Salines, Le Seline, Le Salline, Saline, Salin, Salinas, Arnicho di Salinas, Port of Lazarus, Lazare [o], Marine, Marina, Commercio [customs]. 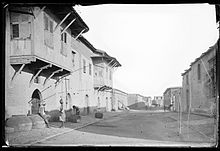 The former city-kingdom of Kition was originally established in the 13th century BC.[5] New cultural elements appearing between 1200 BC and 1000 BC (personal objects, pottery, new architectural forms and ideas) are interpreted as indications of significant political changes and the arrival of the Achaeans, the first Greek colonists of Kition.[6] Around the same time, Phoenicians settled the area.

At the archaeological sites of Kiteon, remains that date from the 13th century BC have been found. Around 1000 BC, Kition was rebuilt by Phoenicians and it subsequently became a center of Phoenician culture. The remains of the sites include cyclopean walls and a complex of five temples and a naval port.

It was conquered in the first millennium BC by a series of great powers of the region. First by the Assyrian Empire, then by Egypt. Like most Cypriot cities, Kition belonged to the Persian or Achaemenid Empire. In 450 BC, the Athenian general Cimon died at sea, while militarily supporting the revolt against Persia's rule over Cyprus. On his deathbed, he urged his officers to conceal his death from both their allies and the Persians.

Strong[7] earthquakes hit the city in 76 AD and the year after.

Earthquakes of 322 AD and 342 "caused the destruction not only of Kition but also of Salamis and Pafos".[7] Kition's harbor silted up, and the population moved to the seafront farther south, sometime after this. (Contributing factors to the silting are thought to have been earthquakes, deforestation and overgrazing.)

The commercial port was located at Skala, during the Ottoman Period. Skala is the name of the seashore immediately south of the Larnaca castle[8]—and its neighborhood. The city is sometimes colloquially referred to as[citation needed] "Skala" (Greek: Σκάλα) meaning "ladder" or "landing stage", referring to the historical port.

The Kamares aqueduct was built in 1747—bringing water to the city from a source around six miles (9.7 km) from the city.[citation needed]

The Salt Lake fills with water during the winter season and is visited by flocks of flamingoes who stay there from November until the end of March. It usually dries up in the summer. In the past,[when?] it yielded good quality salt scraped from the dried surface. The salt from the lake is now considered unsuitable for consumption.

The climate in this area is described by the Köppen Climate Classification System as a hot semi-arid climate (BSh) due to its low annual rainfall and strong summer drought. It is sometimes described as a mediterranean climate, but its winter rainfall is below the required amount to avoid the semi-arid classification.

The city's landmarks include: the Church of Saint Lazarus; the Catacomb of Phaneromeni Church; Hala Sultan Tekke; the Kamares Aqueduct; and the Fort of Larnaca.

So-called "Foinikoudes" is the promenade along Athenon Avenue on the seafront. A row of palm trees (Cypriot Greek: φοινικούδες foinikoudes) lines either side of it.

Larnaca's economy has been growing since 1975,[citation needed] after the loss of the Port of Famagusta, which handled 80% of general cargo, and the closure of Nicosia International Airport, meant that Larnaca's airport and seaport had increasingly important roles in the economy of the island. A €650m upgrade of Larnaca Airport has been completed.

The service sector, including tourism, employs three-quarters of Larnaca's labour force.[citation needed] Many travel and tour operators and other travel-related companies have a head office Larnaca.

There are over a hundred educational institutions in the city,[citation needed] including the American Academy, Larnaca Nareg Armenian school and the Alexander College.

Larnaca has a theatre and an art gallery, which are operated by the municipality. The Cornaro Institute was a cultural centre founded by the celebrated Cypriot artist Stass Paraskos in the Old Town in 2007, which staged contemporary art exhibitions and other cultural events, prior to its closure by Larnaca Municipality in 2017.

Local teams include (football:) AEK Larnaca FC and ALKI Larnaca FC. Due to the Turkish occupation of Famagusta, the two teams of Famagusta, Anorthosis and Nea Salamina, are located here.

Larnaca attracts windsurfers from around the world especially in autumn. Mackenzie Beach hosts windsurfing centre together with an extreme sports centre.

Much of the activity is centered on the city promenade during the major festivals. The most important of these is Kataklysmos or the Festival of the Flood, celebrated in early summer with a series of cultural events. The festival used to last for about a week, but, in recent years, with the increased commercialism of peripheral stalls, rides and temporary Loukoumades restaurants, the festival has been extended to about three weeks, during which the seafront is closed to traffic in the evenings.

The beaches of Larnaca are lined with nearly identical seafood restaurants catering to tourists. Although there are many continental and international restaurants in Larnaca, visitors do not miss out on indulging in the local food. Many of the staple dishes involve beans, such as fasolaki (French beans cooked in red wine with lamb), and louvi me lahana (black-eyed peas with chard). Some of the standard appetizers are potato salad, kohlrabi salad, and hot grilled black olives. The next course may include Cyprus village sausage and sheftalia, dolmades and keftedes, kolokassi in tomato sauce, and several aubergine-based dishes. Baked or grilled lamb (souvla) usually appears somewhere in the course of dining, as does some kind of fish.

Public transport in Larnaca is served only by buses. Bus routes and timetables can be found here.

Larnaca Municipality is twinned with the following:[11]