The Republic of Paraguay is a mostly bilingual country, where both Spanish, an Indo-European language in the Romance branch, and Guaraní, an indigenous language of the Tupian family, have official status.[1] 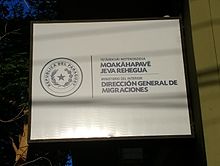 A government sign in Asunción, bilingual in Guaraní and Spanish

Guaraní is the only indigenous language of the Americas whose speakers include a large proportion of non-indigenous people. This is an anomaly in the Americas where language shift towards European colonial languages (in this case, the other official language of Spanish) has otherwise been a nearly universal cultural and identity marker of mestizos (people of mixed Spanish and Amerindian ancestry), and also of culturally assimilated, upwardly-mobile Amerindian people.

About 50,000 Paraguayans speak an indigenous language besides Guaraní:[4]

Besides Spanish, Guaraní and all other previous languages, Portuguese, Plautdietsch, Standard German and Italian are spoken as well.[3]