The linguistic situation in Luxembourg is characterized by the practice and the recognition of three official languages: French, German, and the national language Luxembourgish, established in law in 1984. These three languages are also referred to as the three administrative languages.

Upon the founding of the country, French enjoyed the greatest prestige, and therefore gained preferential use as the official and administrative language. German was used in the political field to comment on the laws and the ordinances in order to make them comprehensible to everyone. At the primary-school level, teaching was limited to German, while French was taught in secondary education. The law of 26 July 1843, reinforced bilingualism by introducing the teaching of French in primary school. 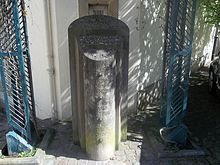 Memorial to the Schengen Agreement in Luxembourgish, French, and German.

Luxembourgish (Lëtzebuergesch), a Franconian language of the Moselle region similar to German and Dutch, was introduced in primary school in 1912. It is a Mosel-Frankish dialect like the dialects in Germany bordering Luxembourg. Unlike its German counterparts, it uses many French loanwords, and is recognized as a separate language rather than a German dialect. The formalization of regional German dialects into national languages arose from the desire to impress a distinct national identity, not associated with the German State. In Switzerland, written German was maintained, albeit with some differences in vocabulary, differing strongly from the spoken Swiss-German speech which the average German cannot understand. In Luxembourg, the dialect was phonetically transcribed into a new language, and while Luxembourgish and a mix of other different languages are spoken on the street, French is often the main language spoken next to German and sometimes Luxembourgish in shops or other commercial sites.

The first printed sentences in Luxembourgish appeared in 1821 in a weekly journal the Luxemburger Wochenblatt. The first book in Luxembourgish was released in 1829 by Antoine Meyer: E' Schrek ob de' Lezeburger Parnassus. Until the 1980s, the language had been used mainly for poetry and drama but has since become increasingly popular for fiction which now represents a significant contribution to Luxemburgish literature. Between 2000 and 2002, Luxembourgish linguist Jerome Lulling developed a lexical database of 185,000 word forms for the very first Luxembourgish spellchecker, thus launching the computerization of the Luxembourgish language.

Until 1984, the official use of the languages was based on the grand-ducal decrees of 1830, 1832 and 1834, which allowed the free choice between German and French. French was preferred in the administration. Luxembourgish had no official status at all.

The constitutional revision of 1984 gave the legislature the power to regulate the language by law. On February 24, 1984, a law, passed by the constitutional chamber, made Luxemburgish the national language. Furthermore, this law recognizes the three languages of Luxembourg (Luxembourgish, French and German) as administrative languages. French remains the language of legislation, due to the application of the Napoleonic civil code in Luxembourg.

Despite having German as one of its official languages, Luxembourg, which was not involved in devising the German orthography reform of 1996, is merely a non-voting observer in the Rat für deutsche Rechtschreibung (Council for German Orthography). The government of Luxembourg unilaterally adopted the reform and, due to its efficiency, it is well-accepted by the country's teachers. According to the duchy's largest newspaper, the Luxemburger Wort, Luxembourg does not perceive itself as a "German-speaking country" (the only national language is Luxembourgish) and thus had no right to take part in the council.[2] Despite this, Luxembourg takes part in the annual meetings of German-speaking countries.[3]

Luxembourg does however participate in the Francophonie and has members in the Académie française, despite French also only being an official language.[4] This might be due to the fact that Francophonie as an organization seeks to promote the use of the French language around the world, rather than regulate it,[citation needed] and thus includes many members that are not French-speaking, such as Romania and Greece.[5]

German and French are the primary languages for public service information. German is the main language of the written press and for recording police case files.[7]

Foreign-born persons and guest workers make up more than a third (47%) of the population of Luxembourg. The most common languages spoken by them, other than German and French, are Portuguese, Italian, and English.[8]

In addition to Luxembourgish, French, and German; English is frequently an acceptable language for use in and with government services.[9]

The following tables list the percentage of inhabitants who are able to speak a language natively or as a second language.