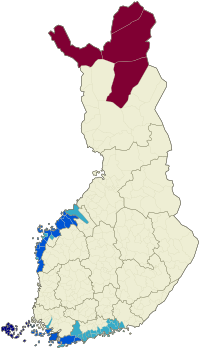 Swedish is the main language of 5.2% of the population in 2019[3] (92.4% in the Åland autonomous province), down from 14% at the beginning of the 20th century. In 2012, 44% of Finnish citizens with another registered primary language than Swedish could hold a conversation in this language.[4] Swedish is a North Germanic language, closely related to Norwegian and Danish. As a subbranch of Indo-European, it is also closely related to other Germanic languages such as German, Dutch, and English.

Swedish was the language of the administration until the late 19th century. Today it is one of the two main official languages, with a position equal to Finnish in most legislation, though the working language in most governmental bodies is Finnish. Both Finnish and Swedish are compulsory subjects in school with an exception for children with a third language as their native language. A successfully completed language test is a prerequisite for governmental offices where a university degree is required.

The four largest Swedish-speaking communities in Finland, in absolute numbers, are those of Helsinki, Espoo, Porvoo and Vaasa, where they constitute significant minorities. Helsinki, the capital, had a Swedish-speaking majority until late in the 19th century. Currently 5.9%[5] of the population of Helsinki are native Swedish speakers and 15% are native speakers of languages other than Finnish and Swedish.[6]

The Swedish dialects spoken in Finland mainland are known as Finland-Swedish. There is a rich Finland-Swedish literature, including authors such as Tove Jansson, Johan Ludvig Runeberg, Edith Södergran and Zacharias Topelius. Runeberg is considered Finland's national poet and wrote the national anthem, "Vårt land", which was only later translated to Finnish.

Up to World War II, Karelian was spoken in the historical Border-Karelian region on the northern shore of Lake Ladoga. After the war, immigrant Karelians were settled all over Finland. In 2001 the Karelian Language Society estimated that the language is understood by 11,000–12,000 people in Finland, most of whom are elderly. A more recent estimate is that there are 5000 first language speakers in Finland but the size of the language community is 30,000.[8]

Karelian was recognized in a regulation by the President in November 2009, in accordance with the European Charter for Regional or Minority Languages.[9] It should be noted this is the Karelian language which has several dialects, and not a Karelian dialect of the Finnish language.

All municipalities outside Åland where both official languages are spoken by either at least 8% of the population or at least 3,000 people are considered bilingual. Swedish reaches these criteria in 59 out of 336 municipalities located in Åland (where this does not matter) and the coastal areas of Ostrobothnia region, Southwest Finland (especially in Åboland outside Turku) and Uusimaa. Outside these areas there are some towns with significant Swedish-speaking minorities not reaching the criteria. Thus the inland is officially unilingually Finnish-speaking. Finnish reaches the criteria everywhere but in Åland and in three municipalities in the Ostrobothnia region, which is also the only region on the Finnish mainland with a Swedish-speaking majority (52% to 46%).

The Sami languages have an official status in the northernmost Finland, in Utsjoki, Inari, Enontekiö and part of Sodankylä, regardless of proportion of speakers.

Knowledge of foreign languages and Swedish as second language in Finland, in percent of the adult population, 2005

Knowledge of the English language in Finland, 2005. According to the Eurobarometer,[11] 63% of the respondents indicated that they know English well enough to have a conversation. Of these 23% (percent, not percentage points) reported a very good knowledge of the language whereas 34% had a good knowledge and 43% basic English skills.

Proportions of main languages in Finland, 2007

Number of speakers of the largest unofficial languages in Finland, 2007