Country lane Road surface marking Shoulder (road)
This article is about that part of a carriageway used by a single line of traffic. For a narrow road in the countryside, see country lane. For other uses, see Lane (disambiguation).
For the stream, see Lanë. 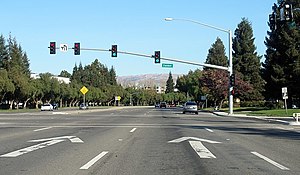 In road transport, a lane is part of a carriageway that is designated to be used by a single line of vehicles to control and guide drivers and reduce traffic conflicts.[1] Most public roads (highways) have at least two lanes, one for traffic in each direction, separated by lane markings. On multilane roadways and busier two-lane roads, lanes are designated with road surface markings. Major highways often have two multi-lane roadways separated by a median.

Some roads and bridges that carry very low volumes of traffic are less than 4.6 metres (15 ft) wide, and are only a single lane wide. Vehicles travelling in opposite directions must slow or stop to pass each other. In rural areas, these are often called country lanes. In urban areas, alleys are often only one lane wide. Urban and suburban one lane roads are often designated for one-way traffic.

For much of human history, roads did not need lane markings because most people walked or rode horses at relatively slow speeds. However, when automobiles, trucks, and buses came into widespread use during the first two decades of the 20th century, head-on collisions became more common.

The history of lane markings is connected to early mass automobile construction in Detroit. In 1906, the first Road Commission of Wayne County, Michigan was formed in an effort to make roads safer. (Henry Ford served on the board in the first year.)[2] In 1909, the commission ordered the construction of the first concrete road (Woodard Avenue in Detroit), and conceived the centerline for highways in 1911. Hence, then chairman of the Road Commission, Edward N. Hines, is widely credited as the inventor of lane markings.[3]

The introduction of lane markings as a common standard is connected to June McCarroll, a physician in Indio, California. She began experimenting with painting lines on roads in 1917 after being run off a highway by a truck driver. After years of lobbying by Dr. McCarroll and her allies, the state of California officially adopted a policy of painting lines on its highways in November of 1924. A portion of Interstate 10 near Indio has been named the Dr. June McCarroll Memorial Freeway in her honor. 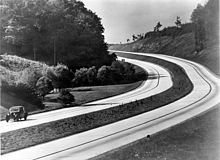 The first lane markings in Europe were painted at an accident hotspot in the small town of Sutton Coldfield near Birmingham, England in 1921. The success of this experiment made its way to other hotspots and led to standardization of white paint lane markings throughout Great Britain.[4]

The first use in Germany was in Berlin in 1925, where white paint marked both lanes and road edges. When the standard for the new autobahn network was conceived in the 1930s, it mandated the usage of black paint for the center line for each carriageway. Black is more visible on the bright surface of concrete.

The Ontario Highway 401 in the Greater Toronto area, with 17 travel lanes in 6 separate carriageways visible in the midground 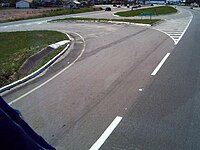 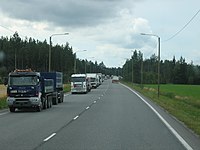 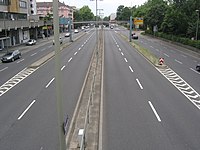 A left-turn merging lane in Germany, needing explanation by a crafted[clarification needed] sign

These usages lead to the phrases life in the slow lane and life in the fast lane, used to describe relaxed or busy lifestyles, respectively and used as the titles of various books and songs.

Assumed widths and heights in road design (in meters)

The widths of vehicle lanes typically vary from 2.7 to 4.6 m (9 to 15 ft). Lane widths are commonly narrower on low volume roads and wider on higher volume roads. The lane width depends on the assumed maximum vehicle width, with an additional space to allow for lateral motion of the vehicle.[citation needed]

In the United States, maximum truck width had been 96 in (2,400 mm) in the Code of Federal Regulations of 1956, which exactly matched then standard shipping container width of 8 feet (2,400 mm). Maximum truck width was increased in 1976 to 102 in (2,591 mm) to harmonize with the slightly larger metric 2.6 m (100 in) world standard width.[10] The same applies to standards in Europe, which increased the allowable width of road vehicles to a current maximum of 2.55 m (100 in) for most trucks, and 2.6 m (100 in) for refrigerator trucks. These widths does not include side mirrors, but only the vehicle body. The minimum extra space had been 0.20 m (7.9 in) and it is currently assumed to be at least 0.25 m (9.8 in) on each side. The international standard allows roads with less traffic to add a second or third lower width lane in the same direction for cars 1.75 m (69 in) - those that have been built exclude trucks from these narrower lanes; however lower width lanes are not a recommended design principle for new roads, as this could be risky if traffic becomes heavier in future.

In the United States, the Interstate Highway standards for the Interstate Highway System use a 12 ft (3.7 m) standard lane width, while narrower lanes are used on lower classification roads. In Europe, laws and road widths vary by country; the minimum widths of lanes are generally between 2.5 to 3.25 m (98 to 128 in).[11] The federal Bundesstraße interurban network in Germany defines a minimum of 3.5 m (140 in) for each lane for the smallest two lane roads, with an additional 0.25 m (9.8 in) on the outer sides and shoulders being at least 1.5 m (59 in) on each side. A modern Autobahn divided highway with two lanes per direction has lanes 3.75 m (148 in) wide with an additional clearance of 0.50 m (20 in) on each side; with three lanes per direction this becomes 3.75 m (148 in) for the rightmost lane and 3.5 m (140 in) for the other lanes. Urban access roads and roads in low-density areas may have lanes as narrow as 2.50 m (98 in) in width per lane, occasionally with shoulders roughly 1 m (39 in) wide.[12]

Depending on speed, road curvature and vehicle properties, heavy goods vehicle (HGV) combinations exhibit a phenomenon called 'high speed outside offtracking'. This means that the rearmost axle of the trailer does not follow the lateral path of the truck tractor unit, but may travel significantly—up to 1–3 meters (3–10 ft)—away from the curve center. Hence, narrow lanes on sharp curves have to be designed slightly wider than on straight road. The phenomenon is much larger on slippery snow-covered roads than on bare asphalt or cement concrete, calling for even larger lane widening.[citation needed]

In general, wider lanes are associated with a reduction in crashes,[13] but in urban settings both narrow (less than 2.8 m) and wide (over 3.1~3.2 m) lanes increase crash risks.[14] Wider lanes (over 3.3~3.4m) are associated with 33% higher impact speeds, as well as higher crash rates. Carrying capacity is also maximal at a width of 3 to 3.1 metres (9.8 to 10.2 ft), both for motor traffic and for bicycles. Pedestrian volume declines as lanes widen, and intersections with narrower lanes provide the highest capacity for bicycles.[14] As lane width decreases, traffic speed diminishes.[15] Some new urbanists argue that safety and capacity are not adversely impacted by reducing lanes widths to as little as 10 ft (3.0 m).[16]

A typical rural American freeway (Interstate 5 in the Central Valley of California). The yellow line is on the left, the dashed white line in the middle, and the solid white line on the right. The rumble strip is to the left of the yellow line.

Painted lane markings vary widely from country to country. In the United States, Canada, Mexico, Honduras, Puerto Rico, Virgin Islands and Norway, yellow lines separate traffic going opposite directions and white separates lanes of traffic traveling the same direction, but such is not the case in many European countries.

Lane markings are mostly lines painted on the road by a road marking machine, which can adjust the marking widths according to the lane type.[17]

Traffic reports in California often refer to accidents being "in the number X lane." The California Department of Transportation (Caltrans) assigns the numbers from left to right.[18] The far left passing lane is the number 1 lane. The number of the slow lane (closest to freeway onramps/offramps) depends on the total number of lanes, and could be anywhere from 2 to 8.