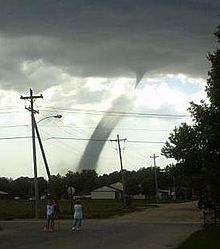 A landspout near North Platte, Nebraska on May 22, 2004. Note the characteristic smooth, tubular shape, similar to that of a waterspout.

Landspout is a term created by atmospheric scientist Howard B. Bluestein in 1985 for a kind of tornado not associated with a mesocyclone.[1] The Glossary of Meteorology defines a landspout as

"Colloquial expression describing tornadoes occurring with a parent cloud in its growth stage and with its vorticity originating in the boundary layer.
The parent cloud does not contain a preexisting mid-level mesocyclone. The landspout was so named because it looks like "a weak Florida Keys waterspout over land."[2]

Landspouts are a type of tornado that forms during the growth stage of a cumulus congestus cloud by stretching boundary layer vorticity upward and into the cumulus congestus's updraft. These generally are smaller and weaker than supercell tornadoes and do not form from a mesocyclone or pre-existing rotation in the cloud. Because of this, landspouts are rarely detected by Doppler weather radar.[3]

Landspouts share a strong resemblance and development process to that of waterspouts, usually taking the form of a translucent and highly laminar helical tube. Landspouts are considered tornadoes since a rapidly rotating column of air is in contact with both the surface and a cumuliform cloud. Not all landspouts are visible, and many are first sighted as debris swirling at the surface before eventually filling in with condensation and dust.

Forming in relation to miscyclones and under updrafts, a landspout generally lasts for less than 15 minutes; however, they can persist substantially longer, and produce heavy damage. They progress through recognizable stages of formation, maturation and dissipation, and tend to decay when a downdraft or significant precipitation occur nearby. They may form in lines or groups of multiple landspouts.[4]

Landspouts are commonly weak; however, in rare occasions, a landspout can be as strong as an EF3 tornado.[4][5]