The Landshut Wedding (German: Landshuter Hochzeit) is one of the largest historical pageants in Europe. Countless visitors from all over the world have taken part, or have been spectators of the "Landshuter Hochzeit 1475", a pageant held in Landshut, Bavaria (Germany). More than 2,000 participants in medieval costumes bring the festival to life to recreate the Late Middle Ages. It commemorates the wedding between Hedwig (also known as Jadvyga Jogailaitė in Lithuanian), the Polish King's and Lithuanian duke daughter, and George, the son of the Duke of Bavaria at Landshut.

The original medieval wedding is re-enacted every four years, and everyone gets carried away with medieval jousting, pageantry, feasting and wedding processions for a short period in the summer.

George the Rich, painted well after his death.

The Cathedral of Landshut

The festival is held in memory of the wedding between George of Bavaria, the son of the Bavarian duke, and Hedwig Jagiellon, daughter of King Casimir IV Jagiellon of Poland, in 1475.

The wedding was negotiated in 1474 in Kraków through legations. The marriage was important because it was seen as a strong alliance against the Ottoman Turks. At the time, most royal marriages were not entered into because of love, but because of political motivations. It took the bride two months to travel to Landshut, where she was received by princes and bishops.

The bridal pair were married in St. Martin's Church, and the service was officiated by Salzburg's Archbishop Bernhard von Rohr. Afterwards the bridal procession proceeded through the Old Town to the Town Hall. Ten thousand people are said to have attended the affair and they were provided food and drink by the young duke's father.

Livestock eaten at the original festival:

The historic event is notable for its detailed records that yield a complete chronicle of the wedding days and which allows the re-enactment to have a touch of realism. The exact recordings can be explained from the historical context with the Fall of Constantinople in 1453 which led into a longer period of growth of the Ottoman Empire. The marriage of the Polish princess with George "the Rich" was very profitable for the Polish king - the 32,000 Guilder bride wealth he received would be worth about 6.5 million euros in modern currency.

The original motivation for the festival dates back to the foundation of the German Reich in 1871 which furthered German national pride. In the years 1876 to 1880 the Landshut town hall was renovated and in the years 1880 to 1882 the celebration room in the town hall was given paintings depicting the Landshut Wedding of 1475, as this very room was used as the dance hall for the festivities at that time. From these images the idea arose among citizens to recreate the event and finally the restaurant owner Georg Trippel and the factory owner Joseph Linnbrunner founded a society "Die Förderer" in 1902.

The number of members of "Die Förderer" society rose from 855 to 7146 during the years 1973 to 2013.[1] The renewed interest in medieval history made the event a major success in terms of tourism. Today the 60,000 or so inhabitants of Landshut welcome 600,000 to 700,000 visitors during the three weeks of the festivities, with some 120,000 visitors watching the bridal procession. The sponsors are able to collect money in the range of 3.5 million euros to allow for the event to take place.

However, the real heroes of the "Landshuter Hochzeit" are the local citizens who act variously as bishops, aristocrats, bride and bridegroom. Without these people, the festival could not take place. The actors are chosen from a commission of the "Die Förderer". Every person who wants to become a member of this association and who wants to take part in this big event has to live near Landshut. However, it is not only the actors who delve into the medieval times. It is customary among Landshut males to let the hair grow longer in the months before the event to match the medieval fashion better. Every citizen of Landshut will dress in medieval garments during festival days (even wrist watches are frowned upon) and the city’s decoration is retrofitted to a great extent. This of course means that the city becomes a pedestrian-only zone; visitors approaching by car are informed of this at a 50 km perimeter around the town.

Due to the great pains that the festival organisers and local participants take in ensuring the authenticity of historical clothing and other personal items (such as weapons and armour), visitors are not permitted to wear medieval-themed outfits, but are invited to join in the celebrations dressed in contemporary "civvies".[2]

Along with the growing fascination for the Middle Ages in the late 20th century the Landshut Wedding has become a well-known medieval festival with great impact on the region’s economics as well as its cultural traditions and aspects of living history.

The next procession is scheduled for 2021. 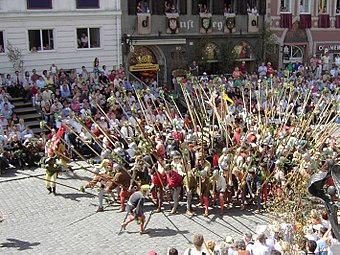 Around two thousand Landshut people take part in the wedding procession. The guests, such as noblemen, citizens, servants and poor people, move through the city to the church of St. Martin where the bishop of Salzburg celebrated the marriage ceremony in 1475. After that the procession ends at the Turnierplatz (Tournament place).

Games of riders and knights 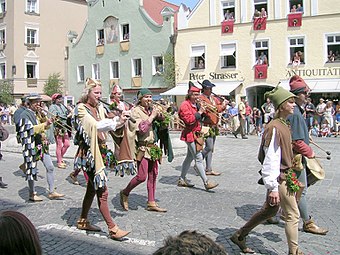 The wedding march leads to the field of challenge (Wiesmahd) on which the bride was immediately greeted by her groom. There young noblemen fight in an exciting challenge for the prize of honor which is given by the bride while the other noble guests take their places at a great table.

Life in the quarters

Place: Quarters at the place of challenge

The different groups create their quarters near the Turnierplatz, where the wedding guests end the day with music and good food.

Visitors witness the preparations for the Wedding, as imagined by a group of actors. Author Leopold Ahlsen’s comedy describes the bride's difficult trip from Kraków to Landshut. Death and plague were the constant companions on the march from Poland to Germany. 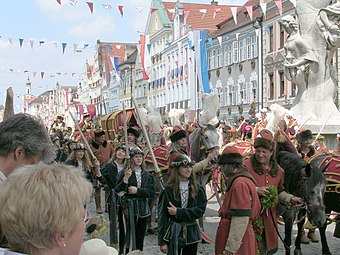 Place: After the festival performances in the town hall

At the festival evening the groom and his bride meet the noble guests for dancing. Different groups perform their dances; for example, the exotic dance of the Moors.

Festival games in the nightly quarters

The day before the Wedding thousands of guests have reached Landshut after a long trip and have to pass the time until the wedding day. They are in their quarters, in bars, or are entertained by games and shows by different artists like tumblers and fire-eaters.

The "Landshuter Hofkapelle" band offers 15th century music as it used to be played in bars and especially at noble festivals.

A choir, called "Ad libitum", perform a concert. It focuses on works of famous composers like Pierre de la Rue, Guillaume Dufay and Josquin des Prez, who was one of the most significant composers in the Middle Ages in Europe. The performance in St. Jodok also comprises short instrumental pieces. 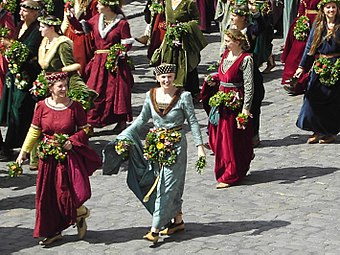 Musicians and dancers of Landshut are invited to an atmospheric evening in the courtyard of the Residenz. They depict the history of Mr. Asinus, a farmer who became a nobleman.

Tavern in the narrow of Stecken

The proprietor of the tavern offers different things to eat and good wine or beer. Comedians, called "Joculatores", celebrate an evening full of voluptuousness to put some life into the party.

Meeting in the old part of town

At this weekend some groups liven up the old part of town with music and dancing as in former times. Comedians try to support the atmosphere with their coarse jokes.