Land degradation is a process in which the value of the biophysical environment is affected by a combination of human-induced processes acting upon the land.[1] It is viewed as any change or disturbance to the land perceived to be deleterious or undesirable.[2] Natural hazards are excluded as a cause; however human activities can indirectly affect phenomena such as floods and bush fires.

This is considered to be an important topic of the 21st century due to the implications land degradation has upon agricultural productivity, the environment, and its effects on food security.[3] It is estimated that up to 40% of the world's agricultural land is seriously degraded.[4]

According to the Special Report on Climate Change and Land of the Intergovernmental Panel on Climate Change: "About a quarter of the Earth’s ice-free land area is subject to human-induced degradation (medium confidence). Soil erosion from agricultural fields is estimated to be currently 10 to 20 times (no tillage) to more than 100 times (conventional tillage) higher than the soil formation rate (medium confidence).".[5]

There are four main ways of looking at land degradation and its impact on the environment around it:

A problem with defining land degradation is that what one group of people might view as degradation, others might view as a benefit or opportunity. For example, planting crops at a location with heavy rainfall and steep slopes would create scientific and environmental concern regarding the risk of soil erosion by water, yet farmers could view the location as a favourable one for high crop yields.[6] 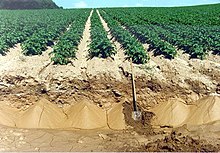 In addition to the usual types of land degradation that have been known for centuries (water, wind and mechanical erosion, physical, chemical and biological degradation), four other types have emerged in the last 50 years:[7]

Overgrazing by livestock can lead to land degradation

Land degradation is a global problem largely related to agricultural use, deforestation and Climate Change. Causes include:

Soil erosion in a wheat field near Pullman, US

Overcutting of vegetation occurs when people cut forests, woodlands and shrublands—to obtain timber, fuelwood and other products—at a pace exceeding the rate of natural regrowth. This is frequent in semi-arid environments, where fuelwood shortages are often severe.

Overgrazing is the grazing of natural pastures at stocking intensities above the livestock carrying capacity; the resulting decrease in the vegetation cover is a leading cause of wind and water erosion. It is a significant factor in Afghanistan. The growing population pressure, during 1980–1990, has led to decreases in the already small areas of agricultural land per person in six out of eight countries (14% for India and 21% for Pakistan).

Population pressure also operates through other mechanisms. Improper agricultural practices, for instance, occur only under constraints such as the saturation of good lands under population pressure which leads settlers to cultivate too shallow or too steep soils, plough fallow land before it has recovered its fertility, or attempt to obtain multiple crops by irrigating unsuitable soils.

High population density is not always related to land degradation. Rather, it is the practices of the human population that can cause a landscape to become degraded. Populations can be a benefit to the land and make it more productive than it is in its natural state. Land degradation is an important factor of internal displacement in many African and Asian countries.[9]

Severe land degradation affects a significant portion of the Earth's arable lands, decreasing the wealth and economic development of nations. As the land resource base becomes less productive, food security is compromised and competition for dwindling resources increases, the seeds of famine and potential conflict are sown.

According to the Special Report on Climate Change and Land of the Intergovernmental Panel on Climate Change climate change in one of the causes of land degradation. The report state that: "Climate change exacerbates land degradation, particularly in lowlying coastal areas, river deltas, drylands and in permafrost areas (high confidence). Over the period 1961–2013, the annual area of drylands in drought has increased, on average by slightly more than 1% per year, with large inter-annual variability. In 2015, about 500 (380–620) million people lived within areas which experienced desertification between the year 1980s and 2000s. The highest numbers of people affected are in South and East Asia, the circum Sahara region including North Africa, and the Middle East including the Arabian Peninsula (low confidence). Other dryland regions have also experienced desertification. People living in already degraded or desertified areas are increasingly negatively affected by climate change (high confidence)."[10]

Significant land degradation from seawater inundation, particularly in river deltas and on low-lying islands, is a potential hazard that was identified in a 2007 IPCC report.

As a result of sea-level rise from climate change, salinity levels can reach levels where agriculture becomes impossible in very low-lying areas.

Sensitivity and resilience are measures of the vulnerability of a landscape to degradation. These two factors combine to explain the degree of vulnerability.[6] Sensitivity is the degree to which a land system undergoes change due to natural forces, human intervention or a combination of both. Resilience is the ability of a landscape to absorb change, without significantly altering the relationship between the relative importance and numbers of individuals and species that compose the community.[11] It also refers to the ability of the region to return to its original state after being changed in some way. The resilience of a landscape can be increased or decreased through human interaction based upon different methods of land-use management. Land that is degraded becomes less resilient than undegraded land, which can lead to even further degradation through shocks to the landscape.