Lake of the Woods

Lake of the Woods (French: lac des Bois) is a lake occupying parts of the Canadian provinces of Ontario and Manitoba and the U.S. state of Minnesota.[2] It separates a small land area of Minnesota from the rest of the United States. The Northwest Angle and the town of Angle Township can be reached from the rest of Minnesota only by crossing the lake or by traveling through Canada. The Northwest Angle is the northernmost part of the contiguous United States. Its "northwesternmost point" served as a problematic landmark in treaties defining the international border. 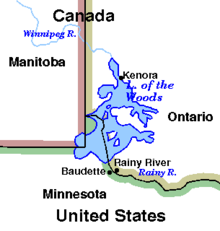 Lake of the Woods is fed by the Rainy River, Shoal Lake, Kakagi Lake and other smaller rivers. The lake drains into the Winnipeg River and then into Lake Winnipeg. Ultimately, its outflow goes north through the Nelson River to Hudson Bay.

Lake of the Woods is over 70 miles (110 km) long and wide, and contains more than 14,552 islands and 65,000 miles (105,000 km) of shoreline. Lake of the Woods is also the sixth largest freshwater lake located (at least partially) in the United States, after the five Great Lakes, and the 36th largest lake in the world by area.

The lake's islands provide nesting habitats for the piping plover and large numbers of American white pelicans and as recently as the early 20th century also provided calving habitat to boreal woodland caribou. There are also several hundred nesting pairs of bald eagles in this area.

Lake of the Woods, a translation of the original French name lac des Bois, was so named from its wooded setting.[3] However, it may have been a mistranslation of the Ojibwe name. "The earliest name we find the lake known by is that given by Verendrye in his journey in 1731. He says it was called Lake Minitic (Cree: ministik; Ojibwe: minitig) or Des Bois. (1) The former of these names, Minitic, seems to be Ojibwe, and to mean "Islands in a River", probably referring to the many islands found in the northern half of the lake. The other name (2) Lac des Bois, or Lake of the Woods, seems to have been a mistranslation[4] of the Indian [sic] name (Ojibwe) by which the Lake was known." [5] One of the names currently used in Ojibwe for this lake is Babiikwaawangaa-zaaga'igan meaning "Lake with Uneven Sand".[6]

Following the IJC recommendations of 1917, discussions between the federal governments of Canada and the United States resulted in the 1925 Canada/USA Convention and Protocol regarding Lake of the Woods. This treaty established the water level operating range on Lake of the Woods, defined the purpose and general mode of operation, and provided for two boards to control regulation. The previously established Canadian LWCB was to regulate the lake on an ongoing basis, but its decisions were to be subject to approval by an International Lake of the Woods Control Board (ILWCB) whenever lake levels rose above or fell below certain limits. In cases where agreement could not be reached between Canadian and American members of the international board, the disputed matter would be referred to the IJC for the final decision. The International Lake of the Woods Control Board, however, is not a board created by the IJC. The board's members (one American and one Canadian) are appointed by the respective federal governments.

Shoal Lake is adjacent to the Lake of the Woods and is the source for the City of Winnipeg drinking water via the Greater Winnipeg Water District Aqueduct, so the administration of the lake is a continuing interest of the governments of Winnipeg and Manitoba.

Communities near Lake of the Woods

Lands within Lake of the Woods

The Aulneau Peninsula was named after the Jesuit Father Jean-Pierre Aulneau, a French Catholic priest, who was killed by natives on 8 June 1736 on Lake of the Woods. The Catholic Church in Warroad, Minnesota, is named Father Aulneau Memorial Church in his honour.

Recreation on Lake of the Woods

Tourism is a large part of the local economy of Lake of the Woods, and there are many recreational opportunities available on the lake and in the surrounding countryside. Much of the lake is fairly remote, but resorts and equipment outfitters offer options for those who do not have access to their own boats and equipment.

Minnesota's Zippel Bay State Park offers a wide variety of services including campsites, toilet facilities, a marina with access to the Zippel River, and a beach. Minnesota and Ontario both offer state-sanctioned parks and campsites, which can be located through the respective governments. Backcountry campers can locate a prospective campsite on Lake of the Woods by boat, landing and examine the site in person. There is abundant wildlife even on the small islands on the lake.

Numerous marinas and resorts on the lake provide accommodation and dining, houseboat rentals, nautical charts, camping and fishing advice, and knowledge on how to most enjoy the lake.