Lake Kivu with Goma in the background, Congo

Lake Kivu is one of the African Great Lakes.[2] It lies on the border between the Democratic Republic of the Congo and Rwanda, and is in the Albertine Rift, the western branch of the East African Rift. Lake Kivu empties into the Ruzizi River, which flows southwards into Lake Tanganyika.[3] 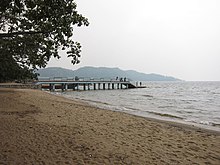 The lake bed sits upon a rift valley that is slowly being pulled apart, causing volcanic activity in the area.

The world's tenth-largest island on a lake, Idjwi, lies in Lake Kivu, within the boundaries of Virunga National Park. Settlements on the lake's shore include Bukavu, Kabare, Kalehe, Sake and Goma in Congo, and Gisenyi, Kibuye, and Cyangugu in Rwanda.

Lake Kivu is a fresh water lake and, along with Cameroonian Lake Nyos and Lake Monoun, is one of three that are known to undergo limnic eruptions. Around the lake, geologists found evidence of massive local extinctions about every thousand years, presumably caused by outgassing events. The trigger for lake overturns is unknown in Lake Kivu's case, but volcanic activity is suspected. The gaseous chemical composition of exploding lakes is unique to each lake. In Lake Kivu's case, it includes methane and carbon dioxide, as a result of lake water interaction with a volcano.[citation needed]

The amount of methane is estimated to be 65 cubic kilometres. If burnt over one year, it would give an average power of about 100 gigawatts for the whole period. There is also an estimated 256 cubic kilometers of carbon dioxide. The water temperature is 24 °C, and the pH level is about 8.6.[citation needed] The methane is reported to be produced by microbial reduction of the volcanic CO2.[4] A future overturn and gas release from the deep waters of Lake Kivu would result in catastrophe, dwarfing the historically documented lake overturns at Lakes Nyos and Monoun. The lives of the approximately two million people who live in the lake basin area would be threatened.

Cores from the Bukavu Bay area of the lake reveal that the bottom has layered deposits of the rare mineral monohydrocalcite interlaid with diatoms, on top of sapropelic sediments with high pyrite content. These are found at three different intervals. The sapropelic layers are believed to be related to hydrothermal discharge and the diatoms to a bloom which reduced the carbon dioxide levels low enough to precipitiate monohydrocalcite.[5]

Scientists hypothesise that sufficient volcanic interaction with the lake's bottom water that has high gas concentrations would heat water, force the methane out of the water, spark a methane explosion, and trigger a nearly simultaneous release of carbon dioxide.[6][7] The carbon dioxide would then suffocate large numbers of people in the lake basin as the gases roll off the lake surface. It is also possible that the lake could spawn lake tsunamis as gas explodes out of it.[8][9][10]

The risk posed by Lake Kivu began to be understood during the analysis of more recent events at Lake Nyos. Lake Kivu's methane was originally thought to be merely a cheap natural resource for export, and for the generation of cheap power. Once the mechanisms that caused lake overturns began to be understood, so did awareness of the risk the lake posed to the local population.

An experimental vent pipe was installed at Lake Nyos in 2001 to remove gas from the deep water, but such a solution for the much larger Lake Kivu would be considerably more expensive. No plan has been initiated to reduce the risk posed by Lake Kivu.[dubious – discuss] The approximately 500 million tonnes of carbon dioxide in the lake is a little under 2 percent of the amount released annually by human fossil fuel burning. Therefore, the process of releasing it could potentially have costs beyond building and operating the system.

This problem associated with the prevalence of methane is that of mazuku, the Swahili term "evil wind" for the outgassing of methane and carbon dioxide that kills people and animals, and can even kill vegetation when in high enough concentration. 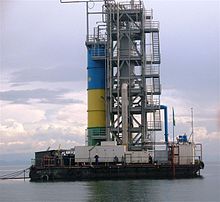 Lake Kivu has recently been found to contain approximately 55 billion cubic metres (1.94 trillion cubic feet) of dissolved biogas at a depth of 300 metres (1,000 ft). Until 2004, extraction of the gas was done on a small scale, with the extracted gas being used to run boilers at the Bralirwa brewery in Gisenyi.[11][12] As far as large-scale exploitation of this resource is concerned, the Rwandan government has negotiated with a number of parties to produce methane from the lake.

In 2011 ContourGlobal, a UK-based energy company focused on emerging markets, secured project financing to initiate a large-scale methane extraction project. The project is run through a local Rwandan entity called KivuWatt, using an offshore barge platform to extract, separate, and clean the gasses obtained from the lake bed before pumping purified methane via an underwater pipeline to on-shore gas engines. Stage one of the project, powering three "gensets" along the lake shore and supplying 26 MW of electricity to the local grid, has since been completed. The next phase aims to deploy nine additional "gensets" at 75 MW to create a total capacity of 101 MW.[13]

In addition, Symbion Power Lake Kivu Limited was awarded a Concession and Power Producing Agreement (PPA) in 2015, to produce 50 MW of power using the Lake Kivu methane resource. The project is expected to commence construction in 2019, with first power (Phase 1 - 14 MW) to be produced in first quarter 2020. The plant will be fully operational in 2021.[14]

Symbion Power has purchased another concession for a further 25 MW and are currently negotiating a PPA with the Rwanda Electricity Group which may see 8 MW of power despatched to the Grid six months after the PPA has been signed. This concession is on the site of the original pilot plant known as KP1.

In addition to managing gas extraction, KivuWatt will also manage the electrical generation plants and on-sell the electrical power to the Rwandan government under the terms of a long-term Power Purchase Agreement (PPA). This allows KivuWatt to control a vertically integrated energy offering from point of extraction to point of sale into the local grid. Extraction is said to be cost-effective and relatively simple because once the gas-rich water is pumped up, the dissolved gases (primarily carbon dioxide, hydrogen sulphide and methane) begin to bubble out as the water pressure gets lower. This project is expected to increase Rwanda's energy generation capability by as much as 20 times, and will enable Rwanda to sell electricity to neighbouring African countries.[12] The firm was awarded the 2011 Africa Power deal of the year for innovation in the financing arrangements it obtained from various sources for the KivuWatt project.[15][16] The $200 million power plant was operating at 26 MW in 2016.[17]

The sky reflected on Lake Kivu

The exploitable stock of the Lake Tanganyika sardine was estimated at 2000–4000 tons per year.[20] It was introduced to Lake Kivu in the late 1959 by a Belgian Engineer A. Collart. At present, Lake Kivu is the sole natural lake in which L. miodon, a sardine originally restricted to Lake Tanganyika, has been introduced initially to fill an empty niche. Prior to the introduction, no planktivorous fish was present in the pelagic waters of Lake Kivu. In the early 1990s, the number of fishers on the lake was 6,563, of which 3,027 were associated with the pelagic fishery and 3,536 with the traditional fishery. Widespread armed conflict in the surrounding region from the mid-1990s resulted in a decline in the fisheries harvest.[21]

Following this introduction, the sardine has gained substantial economic and nutritional importance for the lakeside human population but from an ecosystem standpoint, the introduction of planktivorous fish may result in important modifications of plankton community structure. Recent observations showed the disappearance during the last decades of a large grazer, Daphnia curvirostris, and the dominance of mesozooplankton community by three species of cyclopoid copepod: Thermocyclops consimilis, Mesocyclops aequatorialis and Tropocyclops confinis.[22][23]

The first comprehensive phytoplankton survey was released in 2006.[24] With an annual average chlorophyll a in the mixed layer of 2.2 mg m−3 and low nutrient levels in the euphotic zone, the lake is clearly oligotrophic. Diatoms are the dominant group in the lake, particularly during the dry season episodes of deep mixing. During the rainy season, the stratified water column, with high light and lower nutrient availability, favour dominance of cyanobacteria with high numbers of phototrophic picoplankton.[24][25][26][27] The actual primary production is 0.71 g C m−2 d−1 (≈ 260 g C m−2 a−1).[28]

A study of evolutionary genetics showed that the cichlids from lakes in northern Virunga (e.g., Edward, George, Victoria) would have evolved in a "proto-lake Kivu", much older than the intense volcanic activity (20,000-25,000 years ago) which cut the connection.[29] The elevation of the mountains west of the lake (which is currently the Kahuzi-Biega National Park, one of the largest reserves of eastern lowland (or Grauer's) gorillas in the world), combined with the elevation of the eastern rift (located in eastern Rwanda) would be responsible for drainage of water from central Rwanda in the actual Lake Kivu. This concept of "proto-lake Kivu" was challenged by lack of consistent geological evidence,[30] although the cichlid's molecular clock suggests the existence of a lake much older than the commonly cited 15,000 years.

Lake Kivu is the home of four species of freshwater crab, including two non-endemics (Potamonautes lirrangensis and P. mutandensis) and two endemics (P. bourgaultae and P. idjwiensis).[31] Among Rift Valley lakes, Lake Tanganyika and Lake Victoria are the only other with endemic freshwater crabs.[31][32]