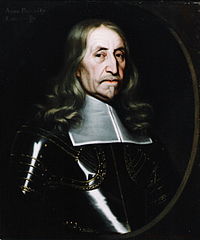 The Much Hon. Richard Lauder, Laird of Haltoun

Laird (/ˈlɛərd/) , the Scots equivalent of "Lord", is a generic name for the owner of a large, long-established Scottish estate, roughly equivalent to an esquire in England, yet ranking above the same in Scotland. In the Scottish order of precedence, a laird ranks below a baron and above a gentleman. This rank is held only by those lairds holding official recognition in a territorial designation by the Lord Lyon King of Arms. They are usually styled [name] [surname] of [lairdship], and are traditionally entitled to place The Much Honoured before their name.[1][2]

Although the UK Government deems that "for Scottish lairds it is not necessary for the words Laird of to appear on any part of a passport, requests from applicants and passport holders for manorial titles and Scottish lairds to be included in their passports may be accepted providing documentary evidence is submitted, and recorded in the passport with the observation e.g.: THE HOLDER IS THE LORD OF THE MANOR/LAIRD OF ....... ".[3]

The Lord Lyon, Scotland's authority on titles, has produced the following guidance regarding the current use of the term laird as a courtesy title:

The term ‘laird’ has generally been applied to the owner of an estate, sometimes by the owner himself or, more commonly, by those living and working on the estate. It is a description rather than a title, and is not appropriate for the owner of a normal residential property, far less the owner of a small souvenir plot of land. The term ‘laird’ is not synonymous with that of ‘lord’ or ‘lady’. Ownership of a souvenir plot of land is not sufficient to bring a person otherwise ineligible within the jurisdiction of the Lord Lyon for the purpose of seeking a grant of arms.[4]

Historically, the term bonnet laird was applied to rural, petty landowners, as they wore a bonnet like the non-landowning classes. Bonnet lairds filled a position in society below lairds and above husbandmen (farmers), similar to the yeomen of England.[5]

The Scots and Northern English dialectal variant Laird has been recorded in writing since the 13th century, as a surname, and in its modern context since the middle of the 15th century. It is derived from the Northern Middle English laverd, itself derived from the Old English word hlafweard meaning "warden of loaves".[8] The Standard English variant, lord, is of the same origin, and would have formerly been interchangeable with laird; however, in modern usage the term "lord" is associated with a peerage title, and thus the terms have come to have separate meanings. In Scotland, however, the title Baron represents a lower rank than it does in England, the rank equal to the English Baron being the Lord of Parliament in Scotland (e.g. Lord Lovat). 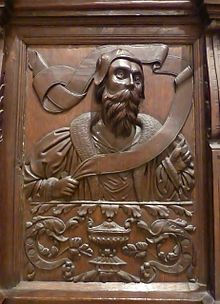 The laird may possess certain local or feudal rights. A lairdship carried voting rights in the ancient pre-Union Parliament of Scotland, although such voting rights were expressed via two representatives from each county who were known as Commissioners of the Shires, who came from the laird class and were chosen by their peers to represent them. A certain level of landownership was a necessary qualification (40 shillings of old extent). A laird is said to hold a lairdship. A woman who holds a lairdship in her own right has been styled with the honorific "Lady".[10]

Although "laird" is sometimes translated as lord and historically signifies the same, like the English term lord of the manor "laird" is not a title of nobility. The designation is a 'corporeal hereditament' (an inheritable property that has an explicit tie to the physical land), i.e. the designation cannot be held in gross, and cannot be bought and sold without selling the physical land. The designation does not entitle the owner to sit in the House of Lords and is the Scottish equivalent to an English squire, in that it is not a noble title, more a courtesy designation meaning landowner with no other rights assigned to it. A laird possessing a Coat of Arms registered in the Public Register of All Arms and Bearings in Scotland is a member of Scotland's minor nobility. Such a person can be recognised as a laird, if not a chief or chieftain, or descendant of one of these, by the formal recognition of a territorial designation as a part of their name by the Lord Lyon.[11][12] The Lord Lyon is the ultimate arbiter as to determining entitlement to a territorial designation, and his right of discretion in recognising these, and their status as a name, dignity or title, have been confirmed in the Scottish courts.[13]

A study in 2003 by academics at the Universities of Edinburgh and Aberdeen concluded that:

"The modern Scottish Highland sporting estate continues to be a place owned by an absentee landowner who uses its 15-20,000 acres for hunting and family holidays. While tolerating public access, he (82% of lairds are male) feels threatened by new legislation, and believes that canoeing and mountain-biking should not take place on his estate at all".[14]

A contemporary popular view of Lairdship titles has taken a unique twist in the 21st century with sales of souvenir plots from sellers who obtain no legal right to the title. A souvenir plot is defined in the Land Registration (Scotland) Act 2012 as “a piece of land which, being of inconsiderable size or no practical utility”.[15] Several websites, and internet vendors on websites like eBay, sell Scottish lairdships along with minuscule "plots of land" – usually one foot squared. The Court of the Lord Lyon considers these particular titles to be meaningless[16][17] because it is impossible to have numerous "lairds" of a single estate at the same time, as has been advertised by these companies.[18][19]

However, despite the law and guidance by the Court of the Lord Lyon, the sellers view the contract purporting to sell a plot of Scottish souvenir land as bestowing the Buyer with the informal right to the title of Laird. This is despite the fact that the buyer does not acquire ownership of the plot because registration of the plot is prohibited by Land Registration (Scotland) Act 2012, s 22 (1)(b). As ownership of land in Scotland requires registration of a valid disposition under Land Registration (Scotland) Act 2012, s 50 (2) the prohibition on registration of a souvenir plot means the buyer does not acquire ownership, and accordingly has no entitlement to a descriptive title premised on landownership.[20]

Traditional and current forms of address 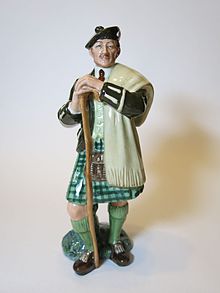 The Laird, a figurine by Royal Doulton

In 1988, Kinnaird Castle was the wedding venue of the Laird and Lady of Kinnaird

Traditionally, a laird is formally styled in the manner evident on the 1730 tombstone in a Scottish churchyard. It reads: "The Much Honoured [Forename (John)] [Surname (Grant)] Laird of [Lairdship (Glenmoriston)]". The section titled Scottish Feudal Baronies in Debrett's states that the use of the prefix "The Much Hon." is "correct", but that "most lairds prefer the unadorned name and territorial designation".[21][22]

Another acceptable style is: "The Much Honoured" The Laird of [Lairdship]"[23]

Currently, the most formal style for the wife of a laird remains "Lady",[24][25] as is a woman who holds a lairdship in her own right. Both women can be formally styled as "The Much Honoured [Forename] [Surname] of [Lairdship]". The National Portrait Gallery holds a 1992 portrait of Catherine Maxwell Stuart, 21st Lady of Traquair.[26][27][28]

In 1988, the Newcastle Journal informed their readers that upon her marriage to Stuart Stout, a Scottish laird, "the former Mrs Audrey Gregory, 61 will now be known as the Lady of Kinnaird". Marrying at Kinnaird Castle, Lady Kinnaird died in 2006.[29][30]

In the UK television series Monarch of the Glen, (based on the 1941 novel by Sir Compton Mackenzie), the wife of "Hector Naismith MacDonald, Laird of Glenbogle" is typically accorded the courtesy title "Lady of Glenbogle".[31]

Other current styles are "The Much Honoured [Forename] [Surname], Lady [Lairdship]".[32]

George V and his wife Queen Mary were reported as being "The Laird and Lady of Balmoral" by the Scottish press in the 1920s and 30s.[33]

The male heir apparent of a lairdship is entitled to use the courtesy title "The Younger" (abbreviation Yr or yr) at the end of his name. The eldest daughter – if the heir apparent – is entitled to use the courtesy title "Maid of [Lairdship]" at the end of her name. Alternatively, she is known as "Miss [Surname] of [Lairdship]", as would be an only daughter. It is not the custom for younger sons of a chief, chieftain or laird to use either the "Younger" or the territorial title. The younger children of a laird are styled as "Mr [Forename] [Surname]" if male, and "Miss [Forename] [Surname] of [Lairdship]" if female.[34]

None of these styles are of the peerage.