Laestadianism, also known as Laestadian Lutheranism and Apostolic Lutheranism, is a pietistic Lutheran revival movement started in Sápmi in the middle of the 19th century.[1] Named after Swedish Lutheran state church administrator and temperance movement leader Lars Levi Laestadius, it is the biggest pietistic revivalist movement in the Nordic countries.[2] It has members mainly in Finland, North America, Norway, Russia and Sweden. There are also smaller congregations in Africa, South America and Central Europe. In addition Laestadians have missionaries in 23 countries.[3] The number of Laestadians worldwide is estimated to be between 144,000 and 219,000.

Organization in Finland and North America

Most Laestadians in Finland are part of the national Lutheran Church of Finland, but in America, where there is no official Lutheran church, they founded their own denomination, which split into several sub-groups in the mid-20th century. Because of doctrinal opinion differences and personality conflicts, the movement split into 19 branches, of which about 15 are active today. The three large main branches are Conservative Laestadianism (corresponds to the Laestadian Lutheran Church, in North America known to other Laestadians as the "Heidemans" after 20th-century leader Paul A. Heideman); the Firstborn (in North America, "Old Apostolic Lutheran Church" ("Esikoinens" to other Laestadian denominations); and Rauhan Sana ("Word of Peace"), known in USA and Canada as the Apostolic Lutheran Church of America (to other Laestadians, the "Mickelsens" after 20th-century leader Reverend Andrew Mickelsen.[4][5](1897-1983)[4] These comprise about 90 percent of Laestadians. Other branches are small and some of them inactive.

In Finland, the Elämän Sana ("the Word of life") group, as the most "mainline" of the different branches of Laestadianism, has been prominent within the hierarchy of the Evangelical Lutheran Church of Finland: Two members have been elected bishops of Oulu, and one has served as Chaplain General (head chaplain of the Finnish Defence Forces and the equivalent of a Major General).

All branches share many essential teachings including a central emphasis on the Lutheran doctrine of justification (forgiveness and grace).

Another core teaching concerns essential differences in lifestyle and beliefs between true believers on one hand, and false Christians (sometimes distinguished as living faith versus dead faith) and unbelievers on the other.

Exclusion and inclusion among Laestadian sub-groups

The leaders of the two largest Laestadian sub-groups, the Conservative Laestadians and Firstborn Laestadians, have for decades excluded each other and all other Laestadian sub-groups from the kingdom of Heaven even though the denominations' core doctrines are nearly indistinguishable.[6] The leadership of the smaller third main sub-group, the Federation, has continued to regard the other sub-groups as of living faith, after having unsuccessfully sought to preserve unity within Laestadianism when its larger counterparts' leaders in the 1930s called for, and later required, dissociation from the Federation and other Laestadian denominations.[7]

Laestadianism holds that when a Christian has committed a sin, whether in thought or deed, she or he should confess the sin to another believer. Thus it is a common practice among Laestadians in or out of church at any time, but especially during the church service prior to the rite of holy communion, to be confessing their sins to one another or, occasionally, to one of the church ministers performing the sacrament. A common declaration is, "Believe your sin(s) forgiven in Jesus' name and (shed) blood." This procedure, ingrained in Laestadianism, differs from absolution in mainstream Lutheran churches in several aspects, including that the request for forgiveness need not be, and most often is not, to the minister; the confession is often made openly; confession is not by appointment but rather readily available to any believer from any other believer at any time; and the specific wording of the declaration states that the means of atonement is Christ's shed blood.

A most solemn rite

Because a Laestadian takes very seriously the proposition that grace exists only for one whose sins have been specifically forgiven, there is scarcely another rite in this movement that would rival the importance of the declaration of forgiveness. This doctrine is a unique extension of the priesthood of the believer doctrine.

Emphasis on avoiding sin and "worldliness"

"Worldliness" is discouraged, and Laestadians frown on pre-marital sex and on alcohol consumption except in the sacrament of holy communion. Conservative Laestadians frown upon worldly vices such as dancing, television, birth control, rhythmic music, make-up, earrings, movies, tattoos, and cursing. Some conservative elements within the church go even further in rejecting the ways of the world, for examples, refusing to buy insurance, prohibiting their children's participation in organized school sports, and removing their car radios.

Especially large numbers of Firstborn Apostolic Lutherans and many members of the most conservative congregations within the Word of Peace group, for examples, do not use birth control because they believe that a child is a gift from God; therefore, many Laestadian families are large.

The central activities of Laestadians are annual or more frequent church conventions, including the Summer Services of Conservative Laestadians, attended by members from congregations far and wide; and for the youth, haps (gatherings of teenagers and young adults to sing from Songs and Hymns of Zion and visit), song services, bonfires, youth discussions, caretaking meetings and revival meetings.

In Finland, the Bible version primarily used by Laestadians is the Finnish Bible of 1776 which, unlike newer translations, is based on the Textus Receptus. The Central Association of the Finnish Associations of Peace (SRK) publishes a triple Finnish translation[8] (1776, 1933/1938, and 1992) that is used as both a study and a service Bible by Conservative Laestadian preachers. American and Canadian Laestadianism uses the King James Version, based as well on the Textus Receptus. 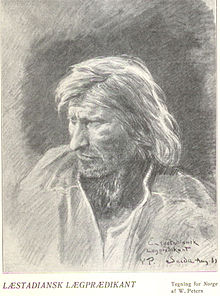 Roots of the movement 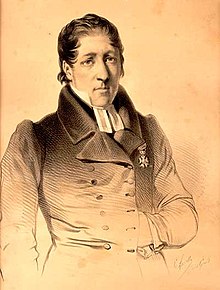 The name of the movement stems from Lars Levi Laestadius (1800–1861), a Swedish Sámi preacher and administrator for the Swedish state Lutheran church in Sápmi who was also a noted botanist. Laestadius started the movement when working as a pastor for the Church of Sweden in northern Sweden in the 1840s. Laestadius met a Sami woman named Milla Clementsdotter from Föllinge in the municipality of Krokom in Jämtland during an 1844 inspection tour of Åsele. She belonged to a revival movement within the Church of Sweden led by pastor Pehr Brandell of the parish of Nora in the municipality of Kramfors in Ångermanland and characterized by pietistic and Moravian influences. She told Laestadius about her spiritual experiences on her journey to a truly living Christianity, and after the meeting Laestadius felt he had come to understand the secret of living faith. He had had a deep experience of having entered a state of grace, of having received God's forgiveness for his sins and of at last truly seeing the path that leads to eternal life. His sermons acquired, in his own words, "a new kind of colour" to which people began to respond. The movement began to spread from Sweden to Finland and Norway, particularly among the Sámi and the Kvens. He preferred his followers to be known simply as "Christians", but others started to call them "Laestadians."

Two great challenges Laestadius had faced since his early days as a church minister were the indifference of his Sámi parishioners, who had been forced by the Swedish government to convert from their shamanistic religion to Lutheranism, and the misery caused them by alcoholism. The spiritual understanding Laestadius acquired and shared in his new sermons "filled with vivid metaphors from the lives of the Sami that they could understand, ... about a God who cared about the lives of the people" had a profound positive effect on both problems. An account from the Sámi cultural perspective recalls a new desire among the Sámi to learn to read and a bustle and energy in the church, with people confessing their sins, crying and praying for forgiveness—within Laestadianism this was known as liikutuksia, a kind of ecstasy. Drunkenness and cattle theft diminished, which had a positive influence on the Samis’ relationships, finances and family life.[9]

Rise of Laestadianism among the Sámi

The rapid rise of Laestadianism among the Sámi was due to several factors. Laestadius proudly self-identified as Sámi through his Southern Sámi mother. He spoke and preached in two Sámi dialects. Further he chose uneducated lay preachers from the Sámi reindeer herders to travel year around with them and preach to the unrepented among them. Additionally, in the early days of the movement, Laestadius, in order to find common ground with his parishioners, borrowed the Sámis’ own familiar pagan deities and concepts and adapted them to Christianity. Another factor in the rise of Laestadianism among the Sámi was that the state-mandated boarding schools soon came to be populated by Laestadian personnel. Next, the strict moral code including strict temperance of Laestadianism appealed to the Sámi. Whole communities that had been wrecked by alcoholism went sober virtually overnight. This had the added positive effect of improving the Sámis' social standing with the outside world. Finally, Laestadianism was a faith that the Sámi could identify as originating from within inasmuch as Laestadius himself professed to have come to know the true living faith only upon his encounter with the poor abused Sámi woman, Milla Clementsdotter.[10]

A faction within Laestadianism has believed that the movement is a contemporary descendant of an unbroken line of living Christianity via the Moravian Church, Luther, the Bohemian Brethren, the Lollards, and the Waldensians all the way back to the primitive Church. Martin Luther, Jan Hus, John Wycliffe and Peter Waldo are seen as spiritual ancestors of Laestadianism.

In Finland, their demographic advantage has grown as majority fertility has fallen, from 2:1 in the 1940s to 4:1 in the 1980s, i.e. four times as many children as the average. "By 1985–7, the Laestadian and Finnish TFRs stood at 5.47 and 1.45 respectively. Even within the Laestadian TFR of 5.47, there is diversity, with a 'moderate' group preferring to stop at four [children] and practise birth control while a conservative cluster engages in unrestrained reproduction. No research has been done on Laestadians' level of endogamy and membership retention [as of 2010]. However, they are residentially and occupationally integrated, so lose more members to assimilation." For example, in the small town of Larsmo, despite some losses to outmarriage and emigration, their share doubled over just thirty years to about 40% in 1991 and was predicted to be "a two-thirds majority of the town in a generation."[12]