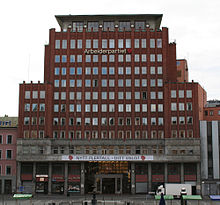 The party headquarters in Oslo

The Labour Party (Bokmål: Arbeiderpartiet; Nynorsk: Arbeidarpartiet; A/Ap), formerly the Norwegian Labour Party (Norwegian: Det norske Arbeiderparti, DNA), is a social-democratic[6][7][8][9] political party in Norway. It was the senior partner of the governing red–green coalition from 2005–2013 and its leader Jens Stoltenberg served as Prime Minister. The party is currently led by Jonas Gahr Støre.

The Labour Party is officially committed to social democratic ideals. Its slogan since the 1930s has been "everyone shall take part" and the party traditionally seeks a strong welfare state, funded through taxes and duties.[10] Since the 1980s, the party has included more of the principles of a social market economy in its policy, allowing for privatisation of state-owned assets and services and reducing income tax progressivity, following the wave of economic liberalisation during the 1980s. During the first Stoltenberg government, the party's policies were inspired by Tony Blair's New Labour agenda in the United Kingdom and saw the most widespread privatisation by any Norwegian government to that date.[11] The party has frequently been described as increasingly neoliberal since the 1980s, both by political scientists and opponents on the left.[12] The Labour Party profiles itself as a progressive party that subscribes to co-operation on a national as well as international level. Its youth wing is the Workers' Youth League. The party is a member of the Party of European Socialists and the Progressive Alliance. It was formerly member of the Comintern (1919–1923), the International Revolutionary Marxist Centre (1932–1935), the Labour and Socialist International (1938–1940) and the Socialist International (1951–2016). The Labour Party has always been a strong supporter of Norwegian NATO membership and has supported Norway joining the European Union during two referendums. During the Cold War, when the party was in government most of the time, the party closely aligned Norway with the United States at the international level and followed an anti-communist policy at the domestic level in the aftermath of the 1948 Kråkerøy speech and culminating in Norway becoming a founding member of NATO in 1949.[13]

Founded in 1887, the party steadily increased in support until it became the largest party in Norway at the 1927 parliamentary election, a position it has held ever since. That year also saw the consolidation of conflicts surrounding the party during the 1920s following its membership in the Comintern. It first formed a government in 1928 and has led the government for all but sixteen years since 1935. From 1945 to 1961, the party had an absolute majority in the Norwegian parliament, to date the last time this has happened in the history of Norway. The electoral domination by the Labour Party during the 1960s and early 1970s was initially broken by competition from smaller left-wing parties, primarily from the Socialist People's Party. From the late 1970s, the party started to lose voters due to a rise in right-wing parties, leading to a swing to the right for the Labour Party under Gro Harlem Brundtland during the 1980s. In 2001, the party achieved its worst results since 1924. Between 2005 and 2013, Labour returned to power after committing to a coalition agreement with other parties in order to form a majority government.[10] Since losing nine seats in 2013, Labour has been in opposition. The party lost a further six seats in 2017, yielding the second-lowest number of seats Labour has held since 1924.

The party was founded in 1887[14] in Arendal and first ran in elections to the Storting in 1894. It entered the parliament in 1903 and steadily increased its vote until 1927, when it became the largest party in Norway. The party were members of Communist International (Comintern), a communist organisation, between 1918 and 1923.[15]

From its roots as a radical alternative to the political establishment, the party grew to its current dominance through several eras. The party experienced a split in 1921 caused by a decision made two years earlier to join the Comintern and the Social Democratic Labour Party of Norway was formed. In 1923, the party left the Comintern while a significant minority of its members left the party to form the Communist Party of Norway. In 1927, the Social Democrats were reunited with Labour. Some Communists also joined Labour whereas other Communists tried a failed merger endeavor which culminated in the formation of the Arbeiderklassens Samlingsparti.

In 1928, Christopher Hornsrud formed Labour's first government, but it lasted only two weeks. During the early 1930s, Labour abandoned its revolutionary profile and set a reformist course. Labour then returned to government in 1935 and remained in power until 1965 (except for the World War II exile period between 1940–1945 and one month in 1963). During most of the first twenty years after World War II, Einar Gerhardsen led the party and the country. He is often referred to as Landsfaderen (Father of the Nation) and is generally considered one of the main architects of the rebuilding of Norway after World War II. This is often considered the golden age of the Norwegian Labour Party. The party was a member of the Labour and Socialist International between 1938 and 1940.[19] In 1958, two Workers' Youth League members (Berge Furre and Kåre Sollund) contacted MPs of the Labour Party to have MPs sign a petition as a part of what is known as the Easter Uprising of the Labour Party.[20] All the MPs who signed, except one, later retracted their signatures.[20]

In the 2013 Norwegian parliamentary election, the party-led coalition lost the election, but Labour remained the largest party in the Storting. This election ended the nearly ten years rule of Stoltenberg, who remained the party leader until he stepped down to be appointed Secretary General of NATO. Jonas Gahr Støre was chosen as new party leader on 14 June 2014.[23] In 2017, the party was targeted by hackers suspected to be from Russia.[24]

The supreme body of the party is the Party Congress which is held every two years. The highest body in between the congresses is the National Delegate's Meeting which is made up of the Executive Board and two delegates from each of the 19 counties.[26]

The executive board consists of 16 elected members as well as the leadership of the party.[26] As of 2015, the leadership is party leader Støre, deputy leaders Hadia Tajik and Trond Giske and general secretary Kjersti Stenseng. The party has varied between having one of two deputy leaders

Since 2005, the party has a policy requiring full gender parity at each level of the organisation above ordinary membership.[28]

The party's youth organisation is the Workers' Youth League and there is a network for women within the party.[28] The party participates in elections to the Sami Parliament of Norway and work related to this has its own organisational structure with seven local groups, a bi-yearly congress, a national council and the Labour group in the Sami parliament.[29] 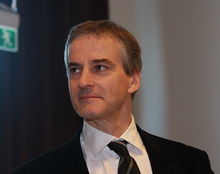