La Malbaie is a municipality in the Charlevoix-Est Regional County Municipality in the province of Quebec, Canada, situated on the north shore of the Saint Lawrence River, at the mouth of the Malbaie River. It was formerly known as Murray Bay.

The development of tourism in this area is said to date back to 1760, when the Scottish feudal lords John Nairne and Malcolm Fraser began receiving visitors to the region at their estates. The Manoir Richelieu (currently serving as a hotel) and Casino de Charlevoix are both located in the neighbourhood and former municipality of Pointe-au-Pic.

In 1608, Samuel de Champlain visited the area. He could not find suitable anchorage for his ship in the bay and therefore named it Malle Baye (archaic French for "bad bay"), a name further justified when during low tide the bay dried up and his ships ran aground.[1]

In 1761, two Scottish officers of the British Army were attracted to the beauty of the place, and they each sought to obtain a concession. John Nairne (1731–1802) received the western shores of the Malbaie River, that he thereafter called the Seignory of Murray Bay that included the settlement of La Malbaie. Malcolm Fraser (1733–1815) was granted the eastern part that became the Seignory of Mount Murray. They also renamed the bay, the settlement, and river after James Murray (1721–1794), British General and successor of Wolfe. Although this name never received official approval, in the 18th and 19th centuries Murray Bay had become the internationally accepted toponym, but La Malbaie remained in local use.[1]

In 1774, the Parish of Saint-Étienne was formed. In 1845, the place was first incorporated as the Municipality of La Malbaie, but it was abolished in 1847. 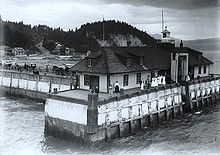 It was reestablished in 1855 as the Parish Municipality of Saint-Étienne-de-Murray-Bay. In 1896, the village itself separated from the parish municipality and was incorporated as the Village Municipality of La Malbaie.[1]

Murray Bay is the site of the summer home of the Taft family, including U.S. President William Howard Taft.[4] The residents of Murray Bay were very demonstrative in their affection for Taft, referring to him as "le petit juge," lifting their caps to him as he drove by, and performing burlesque sketches during the winter months in which he was played by the largest villager. They burned a candle at the time of his death, and spat upon hearing of his betrayal by Theodore Roosevelt.[5]

In 1957, Saint-Étienne-de-Murray-Bay was renamed to Saint-Etienne-de-la-Malbaie. A year later, the Village Municipality of La Malbaie changed status and became the Town of La Malbaie, that annexed the parish municipality in 1965.[1]

La Malbaie is the seat of the judicial district of Charlevoix.[6]

La Malbaie is located in the Charlevoix Seismic Zone, which is the most active seismic zone in Eastern Canada. La Malbaie is notable for having an extremely high seismic risk, although a significant earthquake has not occurred in the region recently.[7] 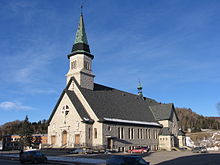 The church of La Malbaie near city hall

View of Malbaie from the Manoir Richelieu

The following is a list of Mayors of La Malbaie.[9] 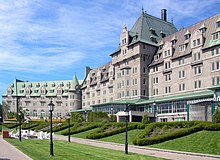 The Fairmont Le Manoir Richelieu is a hotel under the Fairmont Hotels and Resorts banner. The first hotel was built in 1899; the current building was completed in 1929 to replace the first building destroyed by a fire.[10]