Advertisement - You can get this game from STEAM
Borough of Montreal in Quebec, Canada

LaSalle (French pronunciation: ​[lasal]) is a borough (arrondissement) of the city of Montreal, Quebec, Canada. Prior to 2002, it was a separate municipality that had been incorporated in 1912. LaSalle is located in the south-west portion of the Island of Montreal, along the Saint Lawrence river.

LaSalle was named for the area's first seigneur, French explorer René-Robert Cavelier de La Salle (1643–1687). The area became part of a municipality during the mid 19th century, and LaSalle was incorporated as an independent municipality in 1912.

The Lachine Rapids are situated within LaSalle territory. The name Lachine, which is also the name of the neighboring borough, stayed because the LaSalle area was part of the parish of Saints-Anges-de-la-Chine during the French regime period. Before the creation of the Lachine Canal in the 1820s, the rapids had to be portaged on a trail called Chemin LaSalle (what is now LaSalle Boulevard).

LaSalle is known for its many public schools, most notably l'École secondaire Cavelier-de-LaSalle, known as one of the top talent-producing schools in the fields of dance and song. The other common public school in LaSalle is LaSalle Community Comprehensive High School, opened many years ago and home to many cultures.

Michel Leduc, who served as mayor from 1983 to December 31, 2001, was the last mayor of an independent LaSalle.[6] Under Leduc, LaSalle became the first large city in Quebec to launch a large recycling program. LaSalle was annexed by the city of Montreal on January 1, 2002,[6] along with a number of other cities on the Island of Montreal. 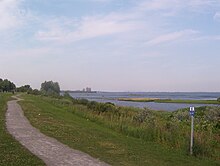 The Saint Lawrence River as viewed from Lasalle.

LaSalle is bounded by five adjacent municipalities and boroughs, these being Lachine towards the west, Verdun and the inner city neighborhood of Ville-Émard in correlation to the north-east, and Montreal West and the neighborhood of Notre-Dame-de-Grâce within the borough of Côte-des-Neiges–Notre-Dame-de-Grâce towards the north, the latter two being divided by Autoroute 20 as well as the Lachine Canal. All complemented by the shore of the Saint Lawrence River to the south and east, specifically a portion of the river known as the Lachine Rapids.

The Borough Hall of LaSalle.

Federally, the western part of the borough is located in Dorval—Lachine—LaSalle and the eastern part in LaSalle—Émard—Verdun. They are represented by Anju Dhillon and David Lametti of the Liberal Party of Canada.

The borough is divided into two districts.

As indicated by the 2016 census, the City of Montreal's borough of LaSalle has a population of 76 853. This demonstrates an increase from the population indicated by the 2011 census, which was 74 276. Much like a substantial amount of other communities in the Greater Montreal area, LaSalle remains ethnically, racially and linguistically diverse. Visible minorities account for approximately 37% of the population, the largest and most notable groups being Black Canadians and South Asians. Linguistically, approximately 43% of LaSalle's residents speak French as their primary language at home, 37% speak English, and 21% primarily speak some other language at home. As with most boroughs on the island of Montreal, a great number of LaSallians are bilingual, having 59% of the population possessing the capability to speak both French and English.

Cégep André-Laurendeau is in LaSalle. 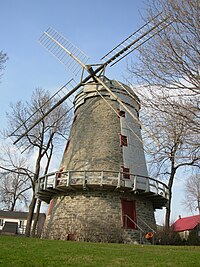 Among LaSalle's attractions are Angrignon Mall, the Lachine Canal and the Canal de l'Aqueduc, with their recreational areas; the Octagone library; the Parc Angrignon; the Île aux Hérons migratory bird refuge; the Saints-Anges archeological site; Des Rapides Park; and the Fleming windmill, which is used as the borough's symbol. Other major installations include the Cégep André-Laurendeau.