In Iceland, the Police (Icelandic: Lögreglan, lit. 'the Law Order') is responsible for law enforcement throughout the country, except in Icelandic territorial waters which fall under the jurisdiction of the Icelandic Coast Guard.[1] Police affairs in Iceland are the responsibility of the Ministry of Justice[2] and are administered by the Office of the National Commissioner of the Police (Embætti ríkislögreglustjóra) on behalf of the ministry.[3] The organisation is divided into nine districts, the largest being the Reykjavík Metropolitan Police (Lögreglan á höfuðborgarsvæðinu), which is responsible for the Capital Region[4] and its total population of around 208,000 people.[5]

The Police can trace its origins to 1778 when the first traces of industry started to appear. Up until that time, the law had been enforced first by individuals permitted to do so by the Althing and then by sýslumenn (sheriffs) and other Royal proxies.[6]

The first Policemen are considered to be the morning star armed night-watchmen of Reykjavík who were commissioned primarily to deter the prisoners of the Reykjavík prison from breaking into the Innréttingarnar [is].[7]

In 1803, the first proper policemen were commissioned in Reykjavík as it became a free town or kaupstaður [is]. The first police chief was Rasmus Frydensberg, the town mayor, who hired two former soldiers, Ole Biørn and Vilhelm Nolte, as the first policemen. It was not until shortly after 1891 that policemen were hired in most of the other areas of Iceland.[8]

In 1933 Alþingi passed the Police Act which provided state participation in financing of police forces. This was done mostly in response to the threat of a communist revolution, whose capabilities had become apparent in a violent attempt to force the decisions of the Reykjavík city council, where a large part of the police forces went out of action as a result of physical injury. The act also authorized the Minister of Justice and Ecclesiastical affairs to call out reserves in critical situations.[9]

On December 2, 2013, a person died due to an armed police operation for the first time in Iceland's modern history. Police had responded to reports of shotgun fire in an apartment in Árbær, a Reykjavík suburb. Initially tear gas was used in an attempt to subdue the gunman,[12] a 59-year-old man, but it failed to affect him.

When an armed police team entered the apartment in question, two officers were injured by shotgun fire. One officer was holding a ballistic shield which got hit. The other officer got hit in the head, but was wearing a ballistic helmet. This led to other officers returning fire. The gunman was taken to the hospital, where he died. National Police Commissioner Haraldur Johannessen immediately apologised to the man's family, calling the incident "unprecedented". The shooter's motives were not immediately clear, though some neighbours reported the gunman was making threats towards them.[13] An investigation into this incident was launched, and the guns involved on all sides were seized. Counseling was offered to the officers involved.[14]

This decision was quite controversial as it went straight against a committee set to see which school would be most suitable. The committee was from Central Public Procurement (Icelandic: Ríkiskaup) who recommended the University of Iceland (Icelandic: Háskóli Íslands).[16]

After the changes took place cadets are required to complete a two-year Police Science university diploma consisting of 120 ECTS credits.[17] The practical training takes place at the newly founded Centre for Police Training and Professional Development, established June 1, 2016 to replace the police academy that was shut down the same year.[18]

Motorcycle officers and normal officers during the 2008 protest at Hótel Borg. These motorcycle uniforms have now been replaced by a new uniform.

The Police wear black uniforms marked with traditional black and white checked markings and the Police star. The working uniform varies from a traditional service uniform (shirt and trousers) to tactical overalls. The old traditional Icelandic service uniform is now used as a dress uniform. The trousers patrol officers use are made from a fire-resistant material.[19]

Although police officers carry only extendable batons and MK-4 OC-spray (pepper spray) whilst on duty, they are trained in the use of firearms and are issued firearms in certain situations.[22] Most patrol vehicles are equipped with firearms in order to limit the response time needed in assignments that demand armed police. The firearms are stored in a special weapons locker. The special operations team, the Víkingasveitin, carry out their daily assignments armed.[23][24] 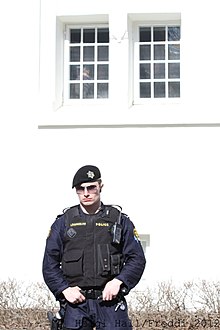 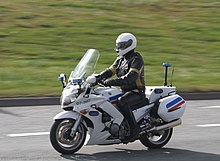 In Iceland, police vehicles are white with the Icelandic word for "police", Lögreglan, written in blue letters.

Starting in Spring 2018, Volvo V90 Cross Country vehicles entered service with police districts across the country.[25][26] The new vehicles were the first to use a new livery designed to improve visibility and were based on other European police vehicle liveries, retiring a livery that had been used by the Icelandic police since 2002.[27] 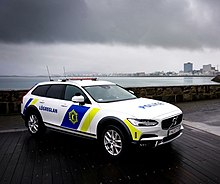 The previous vehicle livery consisted of blue and red stripes with the Police star overlaying the stripes on the front doors. All markings are made of reflective material and the emergency lights are all blue.[28]

The National Police Commissioner owns all of the vehicles used by the police districts around the country. Regional districts rent their vehicles from the National Police Commissioner, paying a per-kilometre charge to cover operating costs, etc. for a period of five years.[29] The Víkingasveitin uses the Volvo XC90 and Volvo XC70 as well as other unmarked vehicles that have been modified for tactical operations.[30][31] 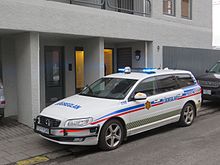 There are nine police districts in Iceland which follow the regions of Iceland with the addition of Vestmannaeyjar being its own district. The current police district division is stipulated by the Regulation on Police Districts of the Police Commissioner which was signed 4 December 2014 by Prime Minister Sigmundur Davíð Gunnlaugsson who acted as Minister of Justice temporarily within the Ministry of the Interior due to a scandal.[32] The headquarters are administrative centres for their respective district and regular police stations.[33][34] 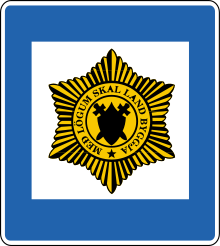 In 1939, at the orders of then Prime Minister Hermann Jónasson, the State Police and the Útlendingaeftirlitið [is] (Foreigner monitoring agency) founded a Security department or eftirgrennslanadeild [is].[35] This service was founded primarily to monitor Nazi scientists in Iceland as well as communists. After World War II, this service had the embassies of communist countries under surveillance and compiled lists of communist sympathizers and potential saboteurs or terrorists.[citation needed] It was not until 2006 that this service was officially acknowledged, after having been known to only a handful of men for more than 60 years, after historians were granted limited access to secret documents.[citation needed]