The Université de Moncton (abbr. U de M, transl. University of Moncton) is a French-language university located in Edmundston, Moncton and Shippagan, New Brunswick, Canada serving the Acadian community of Atlantic Canada. It is the only francophone university in New Brunswick and is one of only two such universities in the Maritimes, the other being the Université Sainte-Anne in Pointe-de-l'Église, Nova Scotia, Canada. It is also the largest French-language university in Canada outside Quebec.[5]

Founded on 19 June 1963, the modern Université de Moncton is the result of the merger of three colleges: Collège Saint-Joseph (Memramcook, 1864), Collège du Sacré-Cœur (Caraquet, 1899 then Bathurst, 1915), and Collège Saint-Louis (Edmundston, 1946).[6] In 1989, the Université of Moncton founded undergraduate degrees in adult education. Alan Beddoe designed the university coats of arms.[7]

The National Film Board of Canada documentary Acadia Acadia ?!? (1971), co-directed by Michel Brault and Pierre Perrault, documents how student protests at the university in 1968–69 sparked an awakening of Acadian nationalism.[8]

The university is divided into three campuses 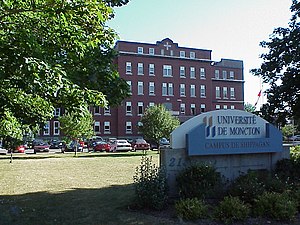 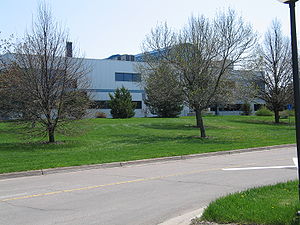 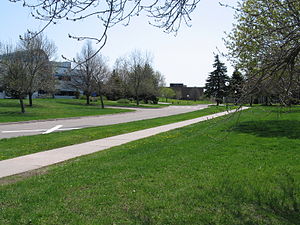 The main campus at Moncton is home to eight university-wide faculties:

U de M offers both the JD and the graduate LLM. The school also offers joint degrees: the JD-MBA (Masters of Business) and JD-MEE (Masters of Environmental Studies). As well, students who already possess a civil law degree (an LL.L or a BCL) from a Canadian school can enroll at U de M for two semesters to complete an LLB.[13]

The School of Food Science, Nutrition and Family Studies within the Faculty of Health Sciences and Community Services has an accredited dietetic program. The program is accredited by the Partnership for Dietetic Education and Practice, the accrediting body in Canada, and the program's graduates may subsequently become registered dietitians.

The faculty of Sciences is located in the Rémi-Rossignol building and covers all cores science subjects, such as: Mathematics, Physics, Chemistry, Biochemistry, Biology, as well as Computer Science.

Programmes at the Edmundston Campus are grouped in the following sectors: business administration, arts and letters, education and kinesiology, nursing, forestry, and social sciences. Administratively, all sectors except foresty are under the campus dean of studies. Foresty is its own school, the only faculty level unit not to report to Moncton.

Programmes at the Shippigan Campus are grouped under the following sectors: business administration, arts and social sciences; nursing; and, science. All programmes fall under the campus dean of studies.

Two of these libraries, Michel-Bastarache and Centre de ressources pédagogiques, are special libraries, catering to the Faculty of Law and the Faculty of Education, respectively. The Centre d'études acadiennes, found on the lower level of Bibliothèque Champlain, is a world-renowned and primary resource and archive centre for Acadian studies.[16]