Kuwait City (Arabic: مدينة الكويت‎) is the capital and largest city of Kuwait. Located at the heart of the country on the south shore of Kuwait Bay on the Persian Gulf, it is the political, cultural and economical centre of the emirate, containing Kuwait's National Assembly (parliament), most government offices, the headquarters of most Kuwaiti corporations and banks.

In 1613, the town of Kuwait was founded in modern-day Kuwait City. In 1716, the Bani Utubs settled in Kuwait. At the time of the arrival of the Utubs, Kuwait was inhabited by a few fishermen and primarily functioned as a fishing village.[1] In the eighteenth century, Kuwait prospered and rapidly became the principal commercial center for the transit of goods between India, Muscat, Baghdad and Arabia.[2][3] By the mid 1700s, Kuwait had already established itself as the major trading route from the Persian Gulf to Aleppo.[4]

During the Persian siege of Basra in 1775–1779, Iraqi merchants took refuge in Kuwait and were partly instrumental in the expansion of Kuwait's boat-building and trading activities.[5] As a result, Kuwait's maritime commerce boomed.[5] Between the years 1775 and 1779, the Indian trade routes with Baghdad, Aleppo, Smyrna and Constantinople were diverted to Kuwait.[4][6] The East India Company was diverted to Kuwait in 1792.[7] The East India Company secured the sea routes between Kuwait, India and the east coasts of Africa.[7] After the Persian Magii withdrew from Basra in 1779, Kuwait continued to attract trade away from Basra.[8]

Kuwait was the center of boat building in the Persian Gulf region.[9][10] During the late eighteenth and nineteenth centuries, ship vessels made in Kuwait carried the bulk of trade between the ports of India, East Africa and the Red Sea.[11][12][13] Kuwaiti ship vessels were renowned throughout the Indian Ocean.[14] Regional geopolitical turbulence helped foster economic prosperity in Kuwait in the second half of the 18th century.[15] Kuwait became prosperous due to Basra's instability in the late 18th century.[16] In the late 18th century, Kuwait partly functioned as a haven for Basra's merchants fleeing Ottoman government persecution.[17] According to Palgrave, Kuwaitis developed a reputation as the best sailors in the Persian Gulf.[14][18][19]

During the reign of Mubarak Al-Sabah, Kuwait was dubbed the "Marseilles of the Gulf" because its economic vitality attracted a large variety of people.[20] In the first decades of the twentieth century, Kuwait had a well-established elite: wealthy trading families who were linked by marriage and shared economic interests.[21] The elite were long-settled, urban, Sunni and Shia families.the majority of which claim descent from the original 30 Bani Utubi families.[21] The wealthiest families were trade merchants who acquired their wealth from long-distance commerce, shipbuilding and pearling.[21] They were a cosmopolitan elite, they traveled extensively to India, Africa and Europe.[21] The elite educated their sons abroad more than other Gulf Arab elite.[21] Western visitors noted that the Kuwaiti elite used European office systems, typewriters and followed European culture with curiosity.[21] The richest families were involved in general trade.[21] The merchant families of Al-Ghanim and Al-Hamad were estimated to be worth millions before the 1940s.[21]

In 1937, Freya Stark wrote about the extent of poverty in Kuwait at the time:

Poverty has settled in Kuwait more heavily since my last visit five years ago, both by sea, where the pearl trade continues to decline, and by land, where the blockade established by Saudi Arabia now harms the merchants.

Some prominent merchant families left Kuwait in the early 1930s due to the prevalence of economic hardship. At the time of the discovery of oil in 1937, most of Kuwait's inhabitants were impoverished.

From 1946 to 1982, Kuwait experienced a period of prosperity driven by oil and its liberal atmosphere.[22][23][24] In popular discourse, the years between 1946 and 1982 are referred to as the "Golden Era".[22][23][24][25] In 1950, a major public-work programme began to enable Kuwaitis to enjoy a modern standard of living. By 1952, the country became the largest oil exporter in the Persian Gulf region. In the following year, the country's annual oil income grew to $169 million.[26] This massive growth attracted many foreign workers, especially from Palestine, Egypt and India and helped finance the development of a new master plan, which the state approved in 1952.[26] In June 1961, Kuwait became independent with the end of the British protectorate and the sheikh Abdullah Al-Salim Al-Sabah became an Emir. Under the terms of the newly drafted constitution, Kuwait held its first parliamentary elections in 1963. Kuwait was the first Persian Gulf country to establish a constitution and parliament.

In the 1960s and 1970s, Kuwait was the most developed country in the region.[27][28][29] Kuwait was the pioneer in the Middle East in diversifying its earnings away from oil exports.[30] The Kuwait Investment Authority is the world's first sovereign wealth fund. From the 1970s onward, Kuwait scored highest of all Arab countries on the Human Development Index.[29] Kuwait University was established in 1966.[29] Kuwait's theatre industry was well-known throughout the Arab world.[22][29]

In the 1960s and 1970s, Kuwait's press was described as one of the freest in the world.[31] Kuwait was the pioneer in the literary renaissance in the Arab region.[32] In 1958, Al Arabi magazine was first published, the magazine went on to become the most popular magazine in the Arab world.[32] Many Arab writers moved to Kuwait for freedom of expression because Kuwait had greater freedom of expression than elsewhere in the Arab world.[33][34] Kuwait was a haven for writers and journalists from all parts of the Middle East. The Iraqi poet Ahmed Matar left Iraq in the 1970s to take refuge in the more liberal environment of Kuwait.[35]

In the early 1980s, Kuwait experienced a major economic crisis after the Souk Al-Manakh stock market crash and decrease in oil price.[40]

During the Iran–Iraq War, Kuwait supported Iraq. Throughout the 1980s, there were several terror attacks in Kuwait, including the 1983 Kuwait bombings, hijacking of several Kuwait Airways planes and attempted assassination of Emir Jaber in 1985.[41] Kuwait was a leading regional hub of science and technology in the 1960s and 1970s up until the early 1980s, the scientific research sector significantly suffered due to the terror attacks.

The Kuwaiti government strongly advocated Islamism throughout the 1980s.[42] At that time, the most serious threat to the continuity of Al Sabah came from home-grown secular democrats.[42] The secular Kuwaiti opposition were protesting the 1976 suspension of the parliament.[42] Al Sabah were attracted to Islamists preaching the virtues of a hierarchical order that included loyalty to the Kuwaiti monarchy.[42] In 1981, the Kuwaiti government gerrymandered electoral districts in favor of the Islamists.[42] Islamists were the government's main allies, hence Islamists were able to colonize state agencies, such as the government ministries.[42] By the mid-1980s, Kuwait was described as an autocracy.[42] In 1986, Emir Jaber suspended the parliament.

Oil fires in Kuwait in 1990, which were a result of the scorched earth policy of Iraqi military forces retreating from Kuwait.

After the Iran–Iraq War ended, Kuwait declined an Iraqi request to forgive its US$65 billion debt.[43] An economic rivalry between the two countries ensued after Kuwait increased its oil production by 40 percent.[44] Tensions between the two countries increased further in July 1990, after Iraq complained to OPEC claiming that Kuwait was stealing its oil from a field near the Iraq–Kuwait border by slant drilling of the Rumaila field.[44]

In August 1990, Iraqi forces invaded and annexed Kuwait. After a series of failed diplomatic negotiations, the United States led a coalition to remove the Iraqi forces from Kuwait, in what became known as the Gulf War. On 26 February 1991, the coalition succeeded in driving out the Iraqi forces. As they retreated, Iraqi forces carried out a scorched earth policy by setting oil wells on fire.[45] During the Iraqi occupation, more than 1,000 Kuwaiti civilians were killed.[46] In addition, more than 600 Kuwaitis went missing during Iraq's occupation,[47] approximately 375 remains were found in mass graves in Iraq.

In March 2003, Kuwait became the springboard for the US-led invasion of Iraq. Upon the death of the Emir Jaber, in January 2006, Saad Al-Sabah succeeded him but was removed nine days later by the Kuwaiti parliament due to his ailing health. Sabah Al-Sabah was sworn in as Emir. In 2011–2012, there were protests inspired by the Arab Spring. The parliament was dissolved in December 2011 due to protests against the parliament. The prime minister stepped down following protests and allegations of corruption. 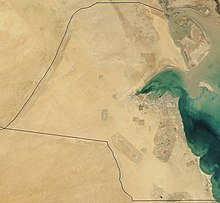 Kuwait City is located on Kuwait Bay, a natural deep-water harbor. 90% of Kuwait's population live within the Kuwait Bay coast. The country is generally low lying, with the highest point being 306 m (1,004 ft) above sea level.[48] It has nine islands, all of which, with the exception of Failaka Island, are uninhabited.[49] With an area of 860 km2 (330 sq mi), the Bubiyan is the largest island in Kuwait and is connected to the rest of the country by a 2,380-metre-long (7,808 ft) bridge.[50] The land area is considered arable[48] and sparse vegetation is found along its 499-kilometre-long (310 mi) coastline.[48]

Kuwait's Burgan field has a total capacity of approximately 70 billion barrels (1.1×1010 m3) of proven oil reserves. During the 1991 Kuwaiti oil fires, more than 500 oil lakes were created covering a combined surface area of about 35.7 km2 (13.8 sq mi).[51] The resulting soil contamination due to oil and soot accumulation had made eastern and south-eastern parts of Kuwait uninhabitable. Sand and oil residue had reduced large parts of the Kuwaiti desert to semi-asphalt surfaces.[52] The oil spills during the Gulf War also drastically affected Kuwait's marine resources.[53] 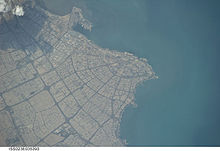 Kuwait City has a hot desert climate (Köppen: BWh) with extremely hot, very prolonged summers and mild, short winters. It is one of the hottest cities in summer on earth.[54] Average summer high temperatures are above 45 °C (113 °F) for three months of the year, and during heat waves; the daytime temperature regularly exceeds 50 °C (122 °F) with nighttime lows often remaining above 30 °C (86 °F). In winter, nighttime temperatures frequently drop below 8 °C (46 °F). Considering its coastal position and relative distance to the equator in comparison with the hot desert climates in Africa and Saudi Arabia, the heat in the city is rather extreme - being surrounded in almost every direction by the hot desert. 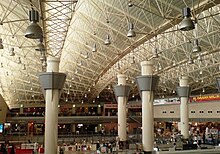 Kuwait has a petroleum-based economy, petroleum and fertilizers are the main export products. The Kuwaiti dinar is the highest-valued currency unit in the world.[58] Petroleum accounts for nearly half of GDP and 90% of export revenues and government income.[59] The Kuwait Stock Exchange is the second-largest stock exchange in the Arab world.

Kuwait is known for its home-grown tradition of theatre.[60] Kuwait is the only Arab country in the Persian Gulf region with a theatrical tradition.[61] The Arabic theatrical movement in Kuwait constitutes a major part of the country's Arabic cultural life.[62] Theatrical activities in Kuwait began in the 1920s when the first spoken dramas were released.[63] Theatre activities are still popular today.[62]

The city is home to the Al Kuwait SC, which has traditionally provided Kuwait's national basketball team with key players.[66]