Kuopio is known nationwide as one of the most important study cities and centers of attraction and growth,[8][6][9] but on the other hand, the history of Kuopio has been characterized by several municipality mergers since 1969, as a result of which Kuopio now includes many countryside; Kuopio's population surpassed 100,000 when the town of Nilsiä joined the city at the beginning of 2013, and when Maaninka joined Kuopio at the beginning of 2015, Kuopio became Finland's largest milk producer community and Finland's second largest beef producer community. In addition, at the end of the 2010s, Kuopio was marked by numerous large projects, which are the largest in the city nationwide immediately after the Helsinki's metropolitan area.[10] With the large tourist center in Tahkovuori, Kuopio has also grown into a major tourist city. Kuopio Airport, located in the Siilinjärvi municipality that almost surrounded by Kuopio, is Finland's fifth-busiest airport, with over 235,000 passengers in 2017.[11]

Kuopio is the current European Region of Gastronomy.[15][16] It is also known as home of Kalakukko, a traditional food of Savonia.[17]

Several explanations are behind the name Kuopio. The first is that in the 16th century, a certain influential person named Kauhanen in Tavinsalmi changed his name to Skopa and the people's pronunciation was Coopia and finally Cuopio. The second explanation is that it comes from the verb kuopia, meaning "paw", as when a horse paws the ground with its hoof. A third explanation is that it came from a certain Karelian man's name Prokopij, from Ruokolahti in the Middle Ages.[18] This explanation is the most likely, and is supported by the Research Institute for the Languages of Finland.

In the 1550s, under the influence of Mikael Agricola, a church and a parish were founded in Kuopionniemi. Governor Peter Brahe founded the city of Kuopio in 1653, but the official date is recognized as 17 November 1775, when King Gustav III of Sweden ordered the formal establishment of the city.[19]

The period of Russian rule (1809–1917) brought notable transportation development within Eastern Finland. The Saimaa Canal (1856) opened up a summer route towards the Baltic Sea, and the Savo railroad (1889) improved transport in winter.[19]

After the World War II, the city's population grew significantly, due in part to the settlement of Karelian evacuees and the high birth rate. The rapid growth of the population forced the expansion of schools; at the end of the 1940s, support was also provided for school transports[20] and the provision of free school meals (the poor people had received it in Kuopio since 1902[21]). The large number of young people and the occasional lack of activity also gave rise to various phenomena in the city, such as the Kuopio Market Riot in 1965.[22][23] In the 1960s, the first construction of the actual suburb, Puijonlaakso, began. Since then, the new areas have each grown in turn: in the 1960s, Puijonlaakso and Tiihotar (as part of Saarijärvi); In the 1970s Saarijärvi, Kelloniemi and Levänen; In the 1980s, Jynkkä and Neulamäki. 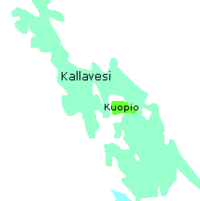 The city is surrounded by Lake Kallavesi, and several parts of it are built on islands. Kuopio's ample waterfronts and islands are also used in the Saaristokaupunki (lit. Archipelago city) -project, the biggest residential area currently being built in Finland.[25] Saaristokaupunki will accommodate a total of 14,000 inhabitants in 2015. All houses will be situated no more than 500 metres (1,600 ft) from the nearest lakeshore.[26]

Kuopio Market Square is the undisputed center of the city and the city center follows a densely built grid pattern with several parks and narrow gutter streets.[27] The environment of the city is quite distinctive; the surface shapes of the waterfront-lined center are so variable that a flat property is a desired rarity.[28] The settlement has spread outside the center of Kuopio according to a dense and sparse finger model that is affordable for public transport,[29] and the new districts have been built in a municipal drive at once; for example, the Saaristokaupunki was banned for building for the previous 25 years,[30] and this Kuopio zoning tradition has a long history.[30] Due to the above-mentioned factors, the population density of the Kuopio city center is the highest in Finland.[31]

Kuopio falls in the subarctic climate zone (Köppen "Dfc"), closely bordering on continental due to its warm summers. Winters are long and cold, with average highs staying below freezing from November until March, and summers are short and relatively mild. Most precipitation occurs in the late summer and early fall. The summers are relatively warm for its latitude, especially the lows. This is due to influence from the lake, making it much warmer on summer nights than in areas away from water. In winter, maritime moderation is eliminated as the lake freezes over.

The city has a nationally unique feature in its street network, where every other street is reserved for pedestrian and cycle traffic,[36] so-called "rännikatu" (derived from the Swedish gränd, alley). These streets provide pedestrians a calm environment away from vehicular traffic.[37] This setup dates back to Kuopio's first town plan by Pehr Kjellman in 1776. Originally, rännikadut were created as a fire barrier to prevent a possible fire escalating in a mainly wood-constructed city.[38]

Long-distance transport connections from Kuopio include Pendolino and InterCity trains from Kuopio railway station to several destinations around Finland, operated by VR, as well as multiple daily departures from Kuopio Airport on Finnair to Helsinki. 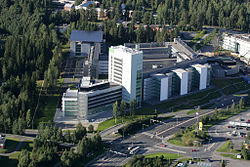 Kuopio has always been a city of education. Some of the first schools offering education in Finnish (such as the School for the Blind in 1871, and the Trade School in 1887) were established in Kuopio. Currently the most important institutions are the University of Eastern Finland, the Savonia University of Applied Sciences, Vocational College of Northern Savonia and the Kuopio department of the Sibelius Academy. One of the oldest schools in the city are Kuopio Lyceum High School, which was officially established in 1872, but was originally built in 1826 and designed by Carl Ludvig Engel.

Kuopio is known as a strong center of health (e.g. it has the biggest yearly enrollment rate of medical students in Finland), pharmacy, environment, food & nutrition (all legalized Clinical and Public Health Nutritionists in Finland graduate from the University of Eastern Finland), safety (education in Emergency Services is centered in Kuopio[41]) and welfare professions, as the major organisations University of Kuopio (now part of the University of Eastern Finland since January 2010.[42]), Savonia University of Applied Sciences and Technopolis Kuopio are particularly oriented to those areas. 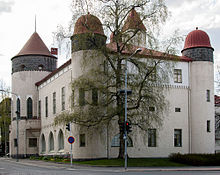 Kuopio is known as the cultural center of Eastern Finland. One of the Kuopio's most important cultural venues are the Kuopio Museum and the Kuopio City Theatre in the city center. A wide range of musical (from kindergarten to doctorate-level studies) and dance education is available and the cultural life is active. Notable events include ANTI – Contemporary Art Festival, Kuopio Dance Festival, Kuopio Rockcock, Kuopio Wine Festival, Kuopio Marathon and Finland Ice Marathon in winter. A notable place, however, to enjoy the local flavor of Kuopio life and food is Sampo, a fish restaurant loved by locals and tourists as well. The city has a comprehensive hotel offer for tourism, one of the most notable is Hotel Savonia, part of the Best Western hotel chain, in the Puijonlaakso district.

Kuopio is known for its association with a national delicacy, Finnish fish pastry (Kalakukko), and the dialect of Savo, as well as the hill of Puijo and the Puijo tower. Besides being a very popular outdoor recreation area, Puijo serves also as a stage for a yearly World Cup ski jumping competition.

In inhabitants of Kuopio have a special reputation: they are known as jovial and verbally joking.[citation needed] Within the Savo culture, the onus is placed on the listener to interpret the story. People of the Kuopio region and Eastern Finland have always had many health problems and the mortality has been higher than on an average in Finland. Because of this, Eastern Finland has been a hotspot for Public Health studies. The North Karelia Project by the University of Kuopio in coordination with the National Public Health Institute and the World Health Organization, beginning in the 1970s was one of its first steps towards world class research.[citation needed]

During the 2000s, Kuopio has placed very well in a number of image, popularity and city-attractiveness surveys. In 2007 it was placed third, behind Tampere and Oulu. 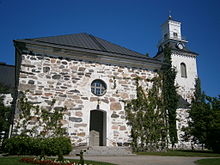 The largest church denomination in Finland, Evangelical Lutheran Church has a diocese in Kuopio, which is shepherded by bishop Jari Jolkkonen.[45]

Kuopio is home of the Finnish Orthodox Church where its primate, archbishop of Karelia and all Finland Leo (Makkonen) is seated. This is an autonomous jurisdiction affiliated with the Patriarchate of Constantinople. It is the only mainstream Orthodox faction to celebrate Easter on the Latin date. The late Archbishop Paul had been successful in producing literature of popular theology. The city is also the location of RIISA- Orthodox Church Museum of Finland.

Kuopio also has an Islamic mosque.[46] Muslims from various parts of the world and certain Finnish Muslims live in Kuopio.

The town is also home to the first Burmese Buddhist monastery in Finland, named the Buddha Dhamma Ramsi monastery.[47] 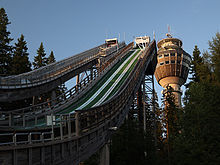 Puijo Ski Jumps with the Observation Tower in the background

Kuopio bid for the 2012 Winter Youth Olympics, a youth sports festival in the tradition of the Olympics. It became a finalist in November 2008, but ultimately lost to Innsbruck, Austria. Kuopio's image as a small city with a large University and many active young people was considered a model of what the International Olympic Committee seeks for the Games.[48]

Kuopio is twinned with 15 cities around the world. It also has one twin county, Lääne-Viru County, Estonia.[49]

Kuopio is twinned with:[49]