Kulmbach is the capital of the district of Kulmbach in Bavaria in Germany. The town is famous for Plassenburg Castle, which houses the largest tin soldier museum in the world, and for its famous sausages, or Bratwürste.

Kulmbach is located in the middle of the Bavarian province of Upper Franconia, about 25 kilometres (15.5 miles) northwest of the city of Bayreuth. To the south of Kulmbach, the River Main begins at the confluence of its headstreams, the White Main and Red Main.

Kulmbach is divided into the following districts (with population in brackets):

From about 900 AD there was a small settlement in what is now the district of Spiegel, which consisted of a forest lodge and a fortified tenant farm (Fronhof) to protect the River Main crossing at Grünwehr. The area later passed into the hands of the Count of Schweinfurt, whose power was usually exercised through the office of the walpode.

Kulmbach was first mentioned as Kulma in a deed of gift in the Alcuin Bible between 1028 and 1040. The name comes from a stream that comes descends the mountain (Culmin-aha, Culmna). This stream was later renamed Kohlenbach due to a misunderstanding.

The counts acquired other lands around Kulmbach, built the first fort, the Plassenburg, in the first third of the twelfth century and founded a market town and a church in today's upper town (Obere Stadt). In 1180 the House of Andechs was elevated to an imperial princedom by the Emperor Barbarossa and given the title of Duke of Merania after the town of Marano between Venice and Trieste (now Marano Lagunare).

Around 1231 Kulmbach was granted town rights. In place of the old Plassenburg, the site of which is unclear, the dukes built a new castle on a hill spur above Kulmbach. The rule of the Meranian family ended with the last Duke of Merania, Otto II, who died childless in 1248. 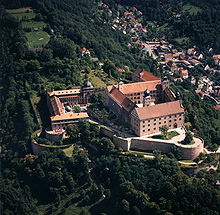 After years of inheritance disputes the castle of Plassenburg and hence rule over Kulmbach went in 1260 to the Thuringian counts of Orlamünde. The Orlamündes finished the new Plassenburg castle and founded the monastery of Himmelkron. Later, they pledged the castle and town. In 1340, after the death of the last Orlamünde, pursuant to an agreement, the burggraves of Nuremberg, members of the Hohenzollern family, took over Kulmbach and Plassenburg.

Until the 17th century, Plassenburg was the residence of the burggrave office or Amt. Later it was the Amt for the Hohenzollern Principality of Kulmbach (also: Brandenburg-Kulmbach or, after 1604, Brandenburg-Bayreuth). As a result of its favourable location on the historic and 'escorted' roads to Bamberg, Nuremberg, Eger, Hof and Leipzig trade in the town flourished - guilds were formed for the weavers, dyers and silk embroiderers. In 1398, 1500 to 2000 inhabitants lived in Kulmbach; this can be seen from a burggraviate inventory of land, houses and taxes. The town was ruled by a lordly Vogt or sheriff, the mayor and a council of prominent citizens.

In the course of rebuilding the town, which had been largely destroyed, St. Peter's Church was rebuilt in late Gothic style. It was here that the first Protestant church service was celebrated under Margrave George the Pious in 1528.

The belligerent margrave, Albert Alcibiades, wanted to bring all Franks under his rule and set up a Frankish duchy. So he moved to oppose the bishoprics of Bamberg and Würzburg, whose rulers allied themselves with the Free Imperial City of Nuremberg. In the Second Margrave War, this alliance invaded Kulmbach on St. Conrad's Day (named after Saint Conrad of Constance), 26 November 1553, and plundered the city. On 21 October 1554 the Plassenburg, whose garrison had hitherto held out against their enemy, was also set on fire and destroyed. The battle is recreated in the German Tin Soldiers Museum in Kulmbach.[2]

View over Kulmbach, Plassenburg and the town centre (Innenstadt)

From 1557 the town was rebuilt under the new margrave, George Frederick. In 1559 the reconstruction of the Plassenburg, one of the most important Renaissance buildings in Germany, began. However, George Frederick's successor, Margrave Christian, moved the location of his Residenz in 1604 to neighbouring Bayreuth as the Plassenburg no longer fulfilled the ideas of courtly absolutism, and the expansion of the castle came to an end. Nevertheless, the margravial residence returned to Kulmbach several times, once, in 1605, due to a fire in the city of Bayreuth and then again, for safety, during the Thirty Years War. Kulmbach was also burned as a Protestant town by imperial troops, but the Plassenburg proved impregnable.

Finally, in 1642, the residence was moved permanently to Bayreuth, and Kulmbach lost its political importance. As a result, little of significance happened here in the years that followed. When Margrave Charles Frederick Alexander sold the March of Brandenburg-Bayreuth to his cousin, the King of Prussia, on account of his lover, Lady Elizabeth Craven, Kulmbach, too, became Prussian, and the Plassenburg was used in the years that followed as a camp for French prisoners of war. Since the Plassenburg represented an obstacle to French and Bavarian forces advancing against Prussia in 1806, the town of Kulmbach was occupied in October and November that year. After the capitulation of its Prussian garrison, the castle was slighted in order to render it militarily useless.

Finally, Kulmbach was granted to Bavaria in 1810. In 1846 it was connected to the King Ludwig South-North Railway. This resulted in a tremendous economic boom - particularly for the breweries - as their products could now be readily exported. So the number of breweries grew to 26 in 1882. In 1890 Kulmbach was elected as a free (kreisunmittelbar) town. In 1933, the NSDAP seized power in Kulmbach and the Imperial School of German Technology (Reichsschule der deutschen Technik) was established in the Plassenburg. As a result, Kulmbach was even given an additional motorway junction which is now the start of today's A 70 autobahn. In early 1945, Kulmbach was captured by American troops without a fight. In the local government reforms of 1972, the districts of Kulmbach and Stadtsteinach were merged and Kulmbach is now the county town. 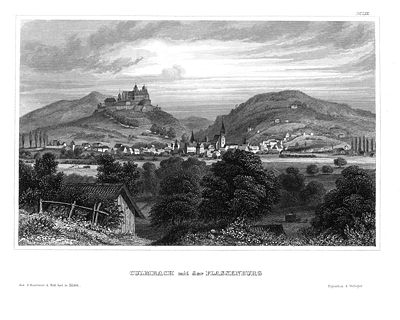 The local elections of 2002 and 2008 resulted in the following representation on the town council:

Kulmbach is twinned with:[3]

Leisure, culture and places of interest 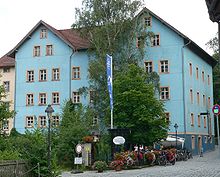 Besides the usual Upper Franconian specialties, there is Kulmbacher Bratwurst sausage which consists of a very fine ground pork and is served in aniseed rolls, the so-called Stölla. These sausages may be eaten at one of the many sausage stalls in the town. Known far beyond the town itself is the strong beer known as EKU 28, brewed by the Kulmbacher Brauerei, which for years was regarded as the strongest beer in the world. Kulmbach has also earned a reputation as a food centre thanks to the Max Rubner Institute (Federal Agency for Food Safety, formerly the Federal Institute for Meat Research), which has come to prominence since the BSE scandal. 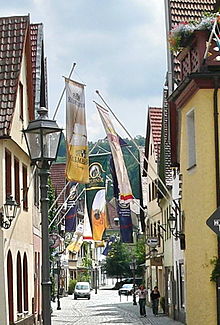 Flags in Kulmbach's Altstadt during the beer festival 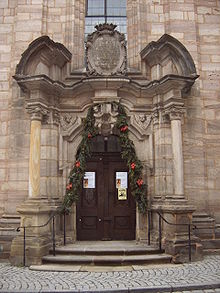 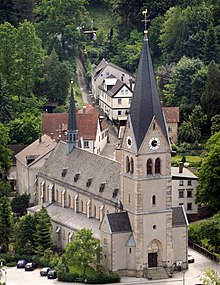 The Roman Catholic Church of Our Lady (also called ULF) on the Schießgraben.

Kulmbach has traditionally been a manufacturing base for the drinks and food industry. Relatively recently it has become a home to biotechnical pharmaceuticals in the shape of Roche Kulmbach GmbH (previously Alnylam Europe AG), as well as the construction and management of hot water and air conditioning equipment, heat pumps, storage and direct heating equipment, such as that made by Glen Dimplex. "AGO" specialises in biomasse and cogeneration power stations. 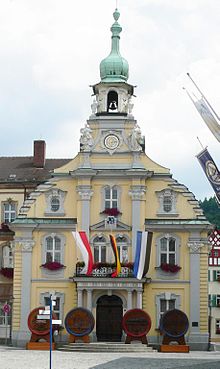 Famous people with links to Kulmbach