Advertisement - You can get this game from STEAM
For other uses, see KRK.

Krk (pronounced [kr̩̂k]; German: Vegl; Latin: Curicta; Italian: Veglia; Vegliot Dalmatian: Vikla; Ancient Greek: Κύρικον, Kyrikon) is a Croatian island in the northern Adriatic Sea, located near Rijeka in the Bay of Kvarner and part of Primorje-Gorski Kotar county. Krk is the largest Adriatic island, with an area of 405.80 km2 (156.68 sq mi),[2][3] Krk is the most populous island in the Adriatic Sea, with multiple towns and villages that contain a total of 19,383 (2011) inhabitants. 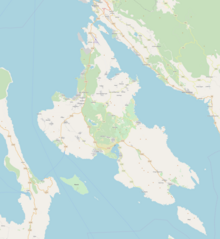 Archeological finds show that the island has been inhabited without interruption since the Neolithic, although not much about the earliest people is known. In later periods, Greek and Latin sources refer to Κύριστα (Ancient Greek) or Curicta (Latin) as one of the Apsyrtidian or Electridian islands held by the Liburnians, an Illyrian tribe. The Liburnians called the island "Curicum", which is assumed to be an illyrized name given the island by its original inhabitants.[4]

There are the remains of prehistoric settlements near Draga Bašćanska and Bronze Age and Iron Age earthworks near Malinska, Dobrinj, Vrbnik and Baška.

Krk came under Roman rule once they defeated the Liburnians. The Town of Krk (Curicum) became a town with Italic law whose status evolved to give it the rights of a municipality. Nothing is known about the internal organizations of the town of Krk during this time. Near the present day Franciscan monastery, the remains of thermal baths have been found. The defensive walls of Roman Curicum were among the most secure of all the towns on the Eastern Adriatic fortified by the Romans. Work began on their construction during the Civil War in Rome (50 BCE) and they were further strengthened in the 60s of the 2nd century CE, to enable them to withstand attacks by the Quadi and the Marcamanni who were at that time threatening the Adriatic. Not far from Krk in 49 BCE there was a decisive sea battle between Caesar and Pompey, which was described impressively by the Roman writer Lucan (39–65 CE) in his work Pharsalia.[5] When the Empire was divided, Krk came under the Eastern Roman Empire.

Migrations of the nations

The walls of the town of Krk could not withstand attacks by the Avars (7th century), but in contrast to Salona, Scardona and Aeona, life in Krk quickly returned to normal. The Croats penetrated into the town on several occasions. They retained many of the Roman names they found there and so it is said that Krk has a "mosaic dialect". Following the Treaty of Aachen (812) the entire island was ceded to the Byzantine Empire and was governed according to the norms of that Empire. During the reign of Emperor Constantine Porphyrogenitus (10th century), Krk was known as Vekla, of which the Romanized variant, also used by the Venetians, was Veglia.[5]

Time of the Croatian Counts and Kings

There are no extant documents showing when Krk became part of the Croatian state. It is known that from around 875 the Byzantine town paid the Croatian rulers 110 gold pieces a year to be able peacefully to keep their hold there. While the Croatian state was being established, Krk found itself on the Venetians' route to the Mediterranean. The Venetians conquered the town for the first time in 1001, and from then Krk's history was closely linked with the history of the Republic of Venice for seven centuries. During the reign of Peter Krešimir IV the Croatian rulers regained their power, but the Venetians took Krk for the second time in 1118.[5]

Reign of the Krk Counts (from 1430, the Frankopan family)

When the Venetians conquered Krk for the second time in 1118, the local noble family, the unknown Dujams,[6] received Krk as part of a pact with Venice, and they became Counts. When Dujam died in 1163, Venice allowed his sons to make their position hereditary, after a payment of 350 Byzantine gold pieces as tax. In a short time the Krk Counts became so strong that at one time from 1244 to 1260, Venice rescinded their authority. This failed to impede their rise, however. They increased economic exploitation, but they also endeavoured to strengthen old traditions and rights with various statutes (the Vinodol Code 1288 and the Vrbnik Statute, 1388). Dujam's youngest son, who died in 1209, succeeded in extending his authority to the mainland, began to serve the Croatian-Hungarian King and received the district of Modruš. Due to his economic strength and social standing, his opponents fought each other for his favour. The Counts became so strong that no power could threaten them (until the Turks). Members of his family were leaders in Split, Trogir and Senj, and from 1392 one of them (Ivan V), became a Croatian-Dalmatian Ban. In 1430 they took the surname Frankopan (Frangipane), claiming to have Roman origins. That year they adopted a coat of arms showing two lions breaking a piece of bread (Latin: frangere panem, break bread). From 1449, the descendants of Nikola IV founded eight branches of his family, and together with the Zrinski Counts were the ruling feudal family in the whole of Croatia right up to 1671.[5] The Frankopans produced seven Croatian Bans, and many of them were patrons of Croatian artists.

Krk was the last Adriatic island to become part of the Venetian Empire. Due to its location, closest to the Uskoks of Senj, it served as a lookout point and the first line of defence against the Uskoks. From that time the ruler was a Venetian noble, but the Small and the Large Councils both had a certain autonomy. The doge controlled the clergy but public documents were written in Glagolitic which was adopted here more than anywhere else. At the beginning of the 16th century the inhabitants of inland Croatia began to settle on Krk in their flight from the Turks, but Krk suffered a decline like all other Venetian property. In 1527 the town had 10,461 inhabitants and in 1527[clarification needed] it had 8,000.[5] 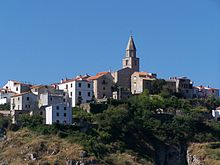 Austrian rule began with the fall of Venice in 1797 and was briefly (1806–1813) interrupted by Napoleon's Illyrian Provinces. In 1822 the Austrians separated the island from Dalmatia and linked it to Istria, so that Krk, Cres and Lošinj came under direct rule from Vienna. This link contributed to the Croatian National Revival and together with Kastav, the town of Krk played a leading role in the spread of Croatian education and culture.[5]

The Italian Occupation (1918–1920) was brief, and Krk was handed over to Croatia, then in Yugoslavia, by the Treaty of Rapallo, Italy took Krk again in the Second World War (1941–1943), and German occupation followed from 1943–1945. The post-war development of Krk was led by tourism. The building of an airport and then a bridge over to the mainland ensures the future of the development of tourism on this island. In Omišalj there has also been industrial development.

The bridge is at the north end of Krk island and uses the small island of Otoćić Sveti Marko (St. Mark's Islet) as a mid-support. 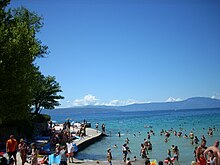 Beach Haludovo in Malinska. The view includes the island Cres and mountain Učka in the distance across the Bay Kvarner.

Krk is located rather near the mainland and has been connected to it via a 1,430 m (4,692 ft) two-arch concrete bridge since 1980, one of the longest concrete bridges in the world. Due to the proximity to the city of Rijeka, Omišalj also hosts the Rijeka International Airport as well as an oil terminal representing a part of the Port of Rijeka and a petrochemical plant.[7][8][9]

Krk is a popular tourist destination, due to its proximity to Slovenia, southern Germany, Austria, and northern Italy. Since the collapse of the Eastern Bloc, many tourists have appeared from Hungary, Romania, and other former Eastern Bloc countries.

Krk is like many Croatian islands, it is rocky and hilly. The rock is mostly karst. The southeast portion of the island is mostly bare as a result of the bora winds.

Some prominent features include:

In 2009 the municipality started the project of building a fiber-optic network on the whole area of the city (the town of Krk and 14 neighboring villages) as part of the town infrastructure. Thereby the focus is on building the passive part of the network, which is the most expensive one and the prerequisite for service providers being able to provide ultra-fast Internet connections and new e-Services. The project is covering 6,243 inhabitants and 6,000 households. The first issue was the elaboration of a cost-benefit analysis [11] in 2009/2010 followed by a preliminary network planning. At the beginning of 2013 the building authority issued the relevant approval. The next step is the elaboration of the main project which is the condition for getting the building permission and by which the project can apply for EU structural funds.

Krk has historically been a center of Croatian culture. Various literature in the Glagolitic alphabet was created and in part preserved on Krk (notably the Baška tablet, one of the oldest preserved texts in Croatian). A monastery lies on the small island of Košljun in a bay off the coast of Krk.

Krk belonged to the Republic of Venice during much of the Middle Ages until its dissolution, when its destinies followed those of Dalmatia. It became part of the Kingdom of Serbs, Croats and Slovenes (later called Yugoslavia) after World War I, in 1920.[citation needed] After that date, the village of Veglia/Krk remained the only predominantly Italian-speaking municipality in Yugoslavia. After World War II, most of the Italians left.

The island of Krk is a participant in the 2020 European Capital of Culture project. Through the program "27 neighborhoods", the city of Krk, Malinska and Vrbnik will be involved in different events during the entire year.[12]

Krk is well known for its historical language diversity. The Middle Chakavian dialect of Croatian is the primary dialect used on the island. Up to 1898 [13] [14] (the day the last speaker of Dalmatian language, Tuone Udaina died in 1898), five languages were spoken on the island: Venetian, Italian, Croatian, Dalmatian, Istro-Romanian.

The municipalities and larger settlements on Krk include:

The fictional island Everon from the video game Operation Flashpoint: Cold War Crisis is based on Krk.[citation needed]

The 45th parallel north passes through the island of Krk, making it positioned halfway between the Equator and the North Pole. The crossing of the 45th parallel is marked with a signpost.

Haplogroup I is especially prevalent on the island