It is included in the Federal Aviation Administration (FAA) National Plan of Integrated Airport Systems for 2017–2021, in which it is categorized as a small-hub primary commercial service facility.[5]

Much of the runway is built on a relatively recent lava flow: the 1801 Huʻehuʻe flow from Hualālai. This flow extended the shoreline out an estimated 1 mi (1.6 km), adding some 4 km2 (1.5 sq mi) of land to the island[6] and creating Keāhole Point. The new airport opened on July 1, 1970, with a single 6,500-foot (2.0 km) runway; the previous smaller airstrip was converted into the Old Kona Airport State Recreation Area.

Construction crews from Bechtel Corporation had used three million pounds of dynamite to flatten the lava flow (which was riddled with Lava tubes) within 13 months.

In its first full year, 515,378 passengers passed through the new open-air tropical-style terminals. The aquaculture ponds and solar energy experiments at the nearby Natural Energy Laboratory of Hawaii Authority (NELHA) can be seen during landing and take-off.

Aloha Airlines and Hawaiian Airlines were the primary air carriers serving the airport during the early and mid 1970s with inter-island flights from Honolulu on Oahu, Kahului on Maui and Lihue on Kauai with Aloha operating Boeing 737-200 jets and Hawaiian operating McDonnell Douglas DC-9-30 jets at this time.[9][10][11] In the late 1970s, Hawaiian was operating larger McDonnell Douglas DC-9-50 jets on its inter-island flights.[12]

By early 1985, United Airlines was operating nonstop service into the airport from both Los Angeles (LAX) and San Francisco (SFO) with Douglas DC-8-71 and wide body McDonnell Douglas DC-10 jetliners.[13]

On January 8, 2017 the airport was renamed Ellison Onizuka Kona International Airport at Keāhole to honor fallen astronaut Ellison Onizuka who was born and raised in Kona.[3] 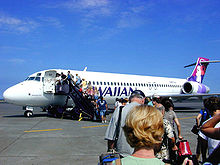 The state government of Hawaiʻi facility operates a runway and a terminal complex of single story buildings along the eastern edge of the airfield for passengers, air cargo and mail, airport support, and general aviation. Airport operations falls under the State of Hawaii Department of Transportation.

Kona International is the only remaining major airport in the Hawaiian Islands where a mobile ramp is used to plane and deplane passengers. Kona International sees daily Airbus and Boeing jetliner service including 717, 737, 757, 767, A321, A330[21] and 777 aircraft, as well as smaller inter-island aircraft, and general private aviation. The airport terminal is a rambling, open-air set of structures. Long after other airports in Hawaiʻi converted their terminals to multi-story buildings with automated jetway systems, Hawaiian Airlines could still utilize their DC-9 fleet's tailcone exits at Kailua-Kona.

An environmental impact statement was prepared in 2005 to add a second runway. The United States Air Force investigated building a second 3,950 ft (1,200 m) runway in 2009. This would be used for practicing landing C-17 military cargo planes on a short runway.[22] Although the 11,000 ft (3,353 m) runway allows flights to Japan and Chicago, it is the only major airport in Hawaii with a single runway.

The airport has three gate areas:

A small museum, the Astronaut Ellison S. Onizuka Space Center, was located between the passenger terminals at the airport.[28] Founded in 1991,[29] the museum was named in honor of Kona-born Ellison Onizuka, who died in 1986 on the Space Shuttle Challenger. The displays included a sample of lunar soil, a space suit from Apollo 13, and personal items from Onizuka. An admission fee was charged.[30] The center closed in March 2016.[31] On January 8, 2017 the airport was renamed the Ellison Onizuka Kona International Airport at Keāhole in his honor.

Prior to the 1970 airport expansion, tourism was centered on Hawaii's East side and the town of Hilo. Tourists to the Kona side of the Island typically flew into Hilo and drove across the island. As recently as 1968 Kona Village Resort didn't have road access let alone a large airport,[32] despite completion of the Royal Kona Resort in 1968.[33]

When the airport opened in 1970, it helped accelerate a shift of tourism from East Hawaii to West Hawaii. Tourism in Hilo had already taken a hit when a tsunami destroyed all seaside hotels in 1960.[34]

The full extent of the airport's impact and shift in tourism can be seen in Hawaii Island Strategic Plan for 2006 to 2015. By 2005 the percentage of accommodations on the West side increased to 86% of the total. In 2005 just 4 modest hotels continued to serve the East side of Hawaii, with 3 of them dating back to the 1960s[35]

Kona Airport's master plan, completed in 2010, calls for a second runway while keeping the option to extend the airport's primary runway to 12,000 feet if required. A second-level concourse with jetways would be built to facilitate overseas flights.[37]

Work is in progress to combine the existing terminals into one space as well as adding a second story to the terminals complex. This second terminal will serve overseas and international passengers. When not in international use the new gates, accessed via jet bridge from the second story, will be used for interisland flights. The location of the second story will be on the west side of the current terminal locations, serving to physically connect the two terminals. For this to happen, the Ellison S. Onizuka Space Center would have been relocated.