The Koenigsegg Agera is a mid-engine sports car produced by Swedish car manufacturer Koenigsegg. It is a successor to the CCX/CCXR. The name comes from the Swedish verb 'agera' which means "to act" or in imperative form "(You) act!".

The Agera ceased production in July 2018 with the unveiling of the two final edition cars at the 2018 Goodwood Festival of Speed. It was succeeded by the Jesko in 2019.[7][4]

In early development, the car was fitted with a 4.7-litre V8 engine with fixed-vane twin-turbochargers,[8] but the engine was replaced with a 5.0-litre twin-turbocharged V8 for the production version of the car.

The Agera is powered by an in-house developed 5.0-litre V8 engine based on the Ford modular engine block and fitted with twin-turbochargers which generates a maximum power output of 706 kW (960 PS; 947 hp) at 6,900 rpm and 1,100 N⋅m (811 lbf⋅ft) of torque at 4,000 rpm.[9] The total weight of the engine is only 197 kg (434 lb) due to a carbon fibre inlet manifold and aluminium construction. The transmission is a specially developed 7-speed dual-clutch with paddle shifters. It is the first dual-clutch transmission to feature only one input shaft. The second clutch slows down the input shaft during up shifts in order to reduce the time it takes to synchronise the next gear, resulting in faster shift times. Most notably, the transmission weighs only 81 kg (179 lb).[10]

The Agera has a body made from impregnated carbon fibre/kevlar with lightweight reinforcements. The car's hardtop roof is stowable under the front hood lid. The chassis is also made out of carbon fibre with an aluminum honeycomb structure that comes with integrated fuel tanks for optimal weight distribution and safety. The rear wing is electronically adjustable with auto setting or manual control in order to have as little compromise as possible between low drag and downforce, depending on driving conditions.[12] The Agera comes with forged aluminum wheels with centre locking nuts, measuring 19-inch on the front and 20-inch on the rear and wrapped in a set of Michelin Super Sport tyres that can be used for speeds of up to 420 km/h (260 mph). Other notable features include the trademark Dihedral synchro helix actuation doors, a new traction control system, LED lighting, blue hood stripes that continue on through the cockpit of the car and a custom interior with a new "Ghost light" lighting system, which uses carbon nanotubes in a unique configuration to shine through the car's aluminum buttons.[13]

The Agera R made its debut at the March 2011 Geneva Motor Show with a Speed Racer livery, and special Michelin tyres. It can accelerate from 0–100 km/h (0–62 mph) in 2.8 seconds and attain a theoretical top speed of 439 km/h (273 mph). The Agera R has a drag coefficient of Cd=0.37, or Cd=0.33 at high speed due to its adaptive rear wing, while producing 300 kg (660 lb) of downforce at 250 km/h (155 mph). This adaptive rear wing system is lighter than conventional hydraulic/electrical adaptive systems, and has the unique ability to compensate for head/tailwind due to its spring-loaded design. Furthermore, the pylons holding the wing play not only a role in the Agera R's aerodynamic performance, but also assist in extracting hot air from the engine bay.[11]

On 2 September 2011, during test sessions in Ängelholm, the Agera R broke six world land speed records for a production car, including 0–300 km/h (0–186 mph) in 14.53 seconds, and 0–300–0 km/h in only 21.19 seconds.[14] The braking performance required to maintain this record is enabled in part by the Agera's stability, demonstrated by Koenigsegg test driver and drivetrain technician Robert Serwanski, who was recorded by passenger Rob Ferretti (founder of the group "Super Speeders") braking from 300 km/h to 0 without holding the steering wheel.[15]

The Agera R can produce lateral cornering forces of 1.60 G,[16] due to a combination of mechanical balance and high levels of grip from the specially developed Michelin Supersport tyres.

On 10 June 2014, NAZA Swedish Motors launched the Agera S in Malaysia. It was the second Koenigsegg after the CCXR to arrive in the country, thus setting a new market for Koenigsegg. It was priced at RM5,000,000 before taxes and it was estimated that it will be priced at RM15,000,000 with government tax and duties—making it one of the most expensive cars in the country. The Agera S is the only model offered in Malaysia due to the absence of E85 biofuel there.[21]

The Koenigsegg One:1 at the Goodwood Festival of Speed

The name One:1 comes from the power-to-weight ratio (1,360 HP to 1360 kg) giving the car 1 PS per 1 kg mass. The 1,360 PS power output is the equivalent of one megawatt, which Koenigsegg claims makes the One:1 the 'world's first megacar'. The car is track focused as opposed to the previous cars made by Koenigsegg. Koenigsegg had to sacrifice a few things to be able to achieve their goal with the car. There is an airscoop on the removable roof and an extra set of radiators in the front compartment, due to this reason it is not possible to store the roof in the boot like previous models. As such, the front is thus modeled to create more downforce, which reduces boot capacity by 40%. 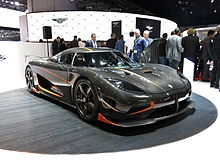 The Agera RS was unveiled at the 2015 Geneva Motor Show, along with the prototype version of the Regera. The Agera RS is an advanced version of the Agera R, implementing some of the new technology and features of the One:1 and combining the features of the Agera R and the Agera S.[24] Koenigsegg billed it as "the ultimate track tool" due to its lightweight features and track optimised technologies. The Agera RS produces 450 kg of downforce at 250 km/h. The 5.0-litre V8 engine now has a power output of 1,176 PS (865 kW; 1,160 hp) on regular pump gasoline. The optional 1-megawatt package increases the engine's power to 1,360 PS (1,000 kW; 1,341 hp). The Agera RS is limited to 25 units. Each Agera RS could be fully customised by its owner.

At the 2016 Geneva Motor Show, a final three-car series of the Agera was announced as a final celebration of the Agera range and as the last models to wear the Agera badge. The cars could be fully customised and combined the Agera RS chassis with the One:1 engine. The first car to be unveiled was called the 'One of One'. It featured a unique orange paint scheme with bare carbon and blue accents. The exterior of the car was complemented with a large adjustable rear wing from the One:1 and triple front canards along with a large front splitter.[27][28]

The other two distinct final edition cars were unveiled online in July 2018 and were called 'Agera FE Thor' and 'Agera FE Vader' respectively. The Thor features a custom two-tone black paintwork consisting of crushed diamonds and white accents. The exterior features a large rear wing reminiscent to that found on the Agera XS, and a different set of front canards, along with a large front splitter and a Le Mans-style central fin for improved downforce, setting it apart from the rest of the Agera models. The Vader features the same crushed diamond paintwork with a bare carbon fibre centre along with white accents, incorporating the same rear wing as Thor but excludes the central fin. Both cars made their public appearance at the 2018 Goodwood Festival of Speed.[7]

On 4 November 2017, Koenigsegg made the production car speed record with an Agera RS recording an average speed of 447 km/h (278 mph). The car achieved a speed of 458 km/h (285 mph) during its northbound run and 436 km/h (271 mph) during its southbound (return run). Official confirmation of the record by Guinness World Records still awaits. The car was driven by Koenigsegg test driver Niklas Lilja. The record run was made in opposite directions on an 18-kilometre (11 mi) section of Nevada State Route 160 between Las Vegas and Pahrump in the United States which was closed specifically for that purpose.[45]

The successor of the Agera called the Jesko was unveiled at the 2019 Geneva Motor Show. The potential replacement was shown to prospective buyers via VR in an event held in Australia by the company beforehand.[47][4]