The Kockums Crane in around the mid-1970s 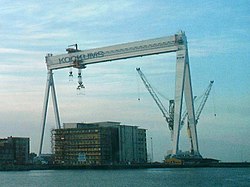 The Kockums Crane (Swedish: Kockumskranen) is a 138-metre (453 ft) high gantry crane in the Hyundai Heavy Industries shipyard in Ulsan, South Korea.[1] It was originally used at the Kockums shipyard in Malmö, Sweden.

The crane was first sold in the early 1990s to the Danish company Burmeister & Wain but the company went bankrupt before the crane could be moved.

The crane was a landmark of Malmö from its time of construction until its dismantling in the summer of 2002, when it was shipped to Ulsan, after being sold to Hyundai Heavy Industries for $1.[1] The Koreans have dubbed the crane 말뫼의 눈물 (Malmoe’s tears), due to the notion that the residents of Malmö wept when they saw their crane being towed away.[1]