Knock (Irish: An Cnoc, meaning The Hill – but now more generally known in Irish as Cnoc Mhuire, "Hill of (the Virgin) Mary")[2] is a village in County Mayo, Ireland. Its notability is derived from the Knock Shrine, an approved Catholic shrine and place of pilgrimage where the faithful believe that the Blessed Virgin Mary, Saint Joseph and Saint John the Evangelist appeared on 21 August 1879. In the 20th century, Knock became one of Europe's major Catholic Marian shrines, alongside Lourdes and Fatima. One and a half million pilgrims visit Knock Shrine annually. Pope John Paul II, a supporter of devotion to the Virgin Mary, visited Knock in 1979 to commemorate the centenary of the apparition. Knock is also a civil parish in the ancient barony of Costello.

On 26 August 2018 Pope Francis visited the shrine at Knock as part of a visit to Ireland for the 9th World Meeting of Families.

Knock comes from the Irish word "cnoc" meaning hill, historical evidence shows the village had been named that as far back as 1625. The Irish language name was changed to "Cnoc Mhuire" meaning the hill of the Virgin Mary after the visions.[3] The parish and village of Knock is sometimes referred to historically and in Lewis' 1837 topographical dictionary as Knockdrumcalry (Cnoc Droma Chálraighe) meaning "hill of the ridge of the Cálraighe".[4] 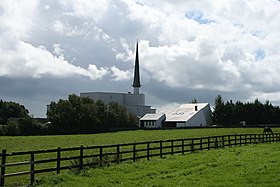 The civil parish of Knock covers 45 townlands. Thirty five of the townlands are in the barony of Costello. The remaining 10 townlands along the central western boundary of the parish are in the neighbouring barony of Clanmorris. Knock is located five miles from the town of Claremorris (one of the major market towns of the early 19th century) and is between Claremorris and Ballyhaunis.

Monsignor James Horan (1911–1986) became parish priest of Knock in 1963. During his tenure his accomplishments included the construction of a new 10,000 capacity basilica, Our Lady, Queen of Ireland, at Knock Shrine in 1967. He was also involved in the construction of Ireland-West Airport, and a visit by Pope John Paul II to Knock in 1979 to commemorate the centenary of the apparition.

The local primary school is Knock National School, built in 1966.

The local soccer club is Kiltimagh Knock United F.C. established in 2002. Their ground, CMS Park, is situated in Cloonlee on the Knock/Kiltimagh Road, 3 km from the village. There is no other sports club located in the parish area and players from the village often play for neighbouring clubs.

Ireland West Airport Knock which is located 20km (12.5 miles) to the north of the village on the N17 was opened by Monsignor James Horan on 30 May 1986 and has been a major tourism boost for the village and shrine.