Knightsbridge is a residential and retail district in central London,[2] south of Hyde Park. It is identified in the London Plan as one of two international retail centres in London, alongside the West End.[3]

Knightsbridge was historically known in Saxon and Old English as Cnihtebricge (c. 1050); Knichtebrig (1235); Cnichtebrugge (13th century); and Knyghtesbrugg 1364, that is "bridge of the young men or retainers," from Old English cniht (genitive case plural –a) and brycg. The original bridge was where one of the old roads to the west crossed the River Westbourne. The allusion may simply be to a place where cnihtas congregated: bridges and wells seem always to have been favourite gathering places of young people. However, there is possibly a more specific reference to the important cnihtengild (‘guild of cnihtas‘) in 11th-century London and to the limits of its jurisdiction (certainly Knightsbridge was one of the limits of the commercial jurisdiction of the City in the 12th century). Cniht in the pre-Norman days did not have the status meaning of a minor noble, but simply described a horseman.[4]

There are however other claims of the name's origins, including a duel between knights. According to a topographer named Norden, the bridge was locally known as "Stonebridge" until a knight called Sir Knyvett was attacked while walking across the bridge late at night. The knight managed to better his attackers and "slew the master thief with his own hand". This tale of Sir Knyvett's valour supposedly gave a new name to the bridge.[5]

There is also the theory that the bridge may have been used by wealthy residents, the "knights and ladies" rather than the common folk, and that the area was used as a meeting place for local youths – where "knight" was a slang term for "lad". Even the original name of the area has come under scrutiny with some arguing it was called Knightsbrigg while others believe it was Kynesbrigg. 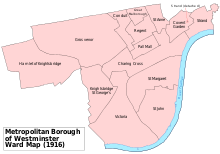 Knightsbridge was a hamlet located primarily in the parish of St Margaret (detached) and partly in St Martin in the Fields (the part that later became St George Hanover Square). It also extended into the parishes of Kensington and Chelsea. It was therefore divided between local authorities from a very early time.[6]

In the time of Edward I, the manor of Knightsbridge appertained to the abbey of Westminster.[7] It was named after a crossing of the River Westbourne, which is now an underground river. It is recorded that the citizens of London met Matilda of England at the Knight's Bridge in 1141.[citation needed]

From 1885 to 1887, as a result of the opening of trade between Britain and the Far East, Humphreys' Hall in Knightsbridge hosted an exhibition of Japanese culture in a setting built to resemble a traditional Japanese village. The exhibition was very popular, with over 250,000 visitors during its early months.[8] Japanese artisans illustrated "the manners, customs and art-industries of their country, attired in their national and picturesque costumes. Magnificently decorated and illuminated Buddhist temple. Five o'clock tea in the Japanese tea-house. Japanese Musical and other Entertainments. Every-day Life as in Japan".[9] W. S. Gilbert and his wife attended the exhibition, which is said to have inspired him to write The Mikado.[citation needed] When the Mikado requests of Ko-Ko the address of his son (Nanki-Poo) after Ko-Ko tells the Mikado that Nanki-Poo has "gone abroad", Ko-Ko replies that Nanki-Poo has gone to Knightsbridge.[10]

Knightsbridge is east of Exhibition Road and west of Sloane Street. Brompton Road, Beauchamp Place and the western section of Pont Street serve roughly as its southern border together with their adjacent gardens and squares such as Ovington Square, Lennox Gardens and Cadogan Square. South of this area, the district fades into Chelsea while Belgravia lies to the east and South Kensington to the west.

Knightsbridge is home to many expensive shops, including the department stores Harrods and Harvey Nichols, and flagship stores of many British and international fashion houses, including those of London-based shoe designers Jimmy Choo and Manolo Blahnik, and two Prada stores. The district also has banks that cater to wealthy individuals. Some of London's most renowned restaurants are here, as well as many exclusive hair and beauty salons, antiques and antiquities dealers, and chic bars and clubs. Bonhams auction house is located in Knightsbridge.[11]

The district and the road itself, which is the only definitive place within it, is small, which assists its cachet: more than half of the zone closest to its tube station (and nearer to no others) is Knightsbridge Underground station. Knightsbridge had in its park side, east and west gold-coloured blocks of exceptional wealth in philanthropist Charles Booth's late Victorian Poverty Map, formerly excluding Brompton Road to the west but extending well into Piccadilly, St James's to the east.[12] Knightsbridge is home to many of the world's richest people and has some of the highest property prices in the world. In 2014 a terrace of 427m2 sold for £15,950,000, a home in Montpelier Square.[13] The average asking price for all the properties in slightly wider SW7 was £4,348,911 (as at Autumn 2014). On-street parking spaces have sold for as much as £300,000 for a 94-year lease.[citation needed] Fourteen of Britain's two hundred most expensive streets are in the neighbourhood, as defined by The Times.[14]

In February 2007, the world's most expensive apartment at One Hyde Park, sold off plan for £100 million, bought by a Qatari prince, and another apartment at the same place in February 2009, at almost the same price, was bought by a Qatari prince.[15] Apartments of this secure, optimum specification, address equate to in excess of £4,000 per square foot (£43,000 per square metre).

Land in Knightsbridge is for the most part identified by City of Westminster (and by the RBKC, where former Brompton parts are included) as strengthened planning law-governed Conservation Areas: 'Albert Gate', 'Belgravia', 'Knightsbridge' and 'Knightsbridge Green'.[17] Properties must be offered here by developers as refurbished flats or houses meeting the enhanced architectural demands in the local Conservation Areas policy of the Local Plan. Within each many buildings are covered by the similar but separate requirements of being listed. Growing demand has since 2000 persuaded the authority to revise its planning policies to permit roof terraces and basement extensions, for residential facilities from leisure suites to private nightclubs, a degree of economic liberalisation documented by a non-tabloid paper in 2008.[18]

The underlying landowners of the few streets making up, without any dispute, Knightsbridge are the Duke of Westminster, Lord Cadogan and the Wellcome Trust with a minority of the freeholds to houses in each street sold to others. Red-brick Queen Anne revival buildings form most of the Cadogan Estates, whereas white stucco-fronted houses are mostly found on the Grosvenor Estate, designed by architect Thomas Cubitt.[19]

The Brompton Oratory, a place of Catholic worship, marks one of the transitions into Kensington, but Belgravia and Brompton have competing mapped neighbourhood status in the east and south of the neighbourhood, and as they have no eponymously named tube stations or historic parish boundaries, their limits are arbitrary and the triangular salient of Brompton, administratively in Kensington, as part of South Kensington, once coloured mid-wealth by Charles Booth, is now blurred with 'Knightsbridge', into which it long projected.[citation needed]

Brompton is only used when the postcode and/or Royal Borough of Kensington and Chelsea is being emphasised, rather than the modern Central London 'district' definitions, which suggest Knightsbridge or South Kensington, either tube station, being at most 350 m away and thus can be easily found on all maps.

For centuries, the area was renowned as the haunt of highwaymen, robbers and cutthroats targeting travellers on the western route out of London, but its fortunes were transformed in the 19th century. However, the area has often been a target for high-profile crime.

In 1975, the Walton's Restaurant bombing occurred, in which two civilians were killed by a Provisional IRA bomb.

In 1980, the Iranian Embassy siege took place in Knightsbridge, lasting several days. It ended when the Special Air Service stormed the building, which was on live television.

In 1983, three Christmas shoppers and three Metropolitan Police officers were killed by an IRA car-bomb placed outside Harrods.[20] In 1987, the Knightsbridge Security Deposit centre was the target of a robbery, and the thieves left with a haul worth £60 million ( in 1987 £ ).

In 2005, 22-year-old beautician Clare Bernal was gunned down by her ex-boyfriend Michal Pech on the shopfloor of Harvey Nichols in front of colleagues and shoppers before Pech fatally turned the gun on himself. The case attracted extensive coverage in the media, and Clare's mother Patricia has since led a campaign to address flaws in the system, which allowed her daughter's murder to happen.[21]

Many residential buildings are heavily covered by CCTV and are staffed by security guards, and railings or bars on lower floor windows are commonplace.

To the north of the area, is the Hyde Park Barracks of the Household Cavalry, with a distinctive 33 storey tower by Sir Basil Spence. The Royalty and Diplomatic Protection Department is based in Walton Street. The Embassy of Libya is located at 15 Knightsbridge, the Embassy of France at no 58 and the Embassy of Kuwait at 2 Albert Gate, just off Knightsbridge.[22]

On the religious side it contains the impressive Brompton Oratory (Catholic church, Brompton Road) and the CoE Holy Trinity Church behind it, a Church of Jesus Christ of Latter Day Saints in Exhibition Road, the Russian Orthodox Church in Ennismore Gardens, St Columba's Church of Scotland, Pont Street, and Deutsche Evangelische Christuskirche. The former St Saviour's church, designed by George Basevi, is now a private home.

Knightsbridge takes its name from the road that runs along the south side of Hyde Park, west from Hyde Park Corner, spanning the City of Westminster and the Royal Borough of Kensington and Chelsea. Up to Brompton Road, it is a part of the A4 arterial road, while the remainder is part of the A315 road. West of Rutland Gardens, the road becomes Kensington Road.

Eric Coates uses Knightsbridge as the setting of a march for the 3rd movement of his London Suite (1933). It gained popularity through the radio show In Town Tonight (1933–1960).

Knightsbridge is referenced in the story book Neverwhere by Neil Gaiman as a place the protagonists need to cross to go to the next floating market. "The Knightsbridge" is used a metaphor for the night and its dangers they need to pass through.[23]