Albert Medal for Lifesaving Order of the British Empire Royal Red Cross
In the British honours system, a title granted to a man who has been knighted by the monarch but not inducted as a member of one of the organised orders of chivalry

The title of Knight Bachelor is the basic rank granted to a man who has been knighted by the monarch but not inducted as a member of one of the organised orders of chivalry; it is a part of the British honours system.[1] Knights Bachelor are the most ancient sort of British knight[2] (the rank existed during the 13th-century reign of King Henry III), but Knights Bachelor rank below knights of chivalric orders. A man who is knighted is formally addressed as "Sir".

Knighthood is usually conferred for public service; amongst its recipients are all male judges of Her Majesty's High Court of Justice in England. It is possible to be a Knight Bachelor and a junior member of an order of chivalry without being a knight of that order; this situation has become rather common, especially among those recognised for achievements in entertainment. For instance, Sir Michael Gambon, Sir Derek Jacobi, Sir Anthony Hopkins, Sir Elton John, Sir Peter Stearns, Sir Michael Caine, Sir Barry Gibb and Sir Ian McKellen are Commanders of the Most Excellent Order of the British Empire (CBEs); Sir Patrick Stewart, Sir Tom Jones and Sir Van Morrison are Officers of the Most Excellent Order of the British Empire (OBEs) (as were Sir Ian Holm, Sir Bruce Forsyth, Sir Alan Bates, Sir Robert Helpmann, Sir Nigel Hawthorne, Sir John Mills, Sir John Hurt, Sir Christopher Lee, Sir Terry Pratchett, Sir Peter Ustinov, Sir Alec Guinness, Sir Richard Attenborough, Sir Michael Hordern and Sir Michael Redgrave during their lives); while Sir Paul McCartney and Sir Richard Starkey (Ringo Starr) are Members of the Most Excellent Order of the British Empire (MBE). None of them would be entitled to use the honorific "Sir" by virtue of their membership of the order alone, but as they are all also Knights Bachelor, they are entitled to preface their names with that title.

Knights Bachelor may prefix "Sir" to their forenames and wives of Knights may prefix "Lady" to their surnames.[1][3][4] Since recipients are not knights of an order of chivalry there are no post-nominal letters associated with the honour,[5] however when the style "Sir" is awkward or incomplete due to a subsequent appointment, recipients may use the letters "Kt" after their name (note the lowercase "t" which distinguishes it from "KT"). This style is often adopted by Knights Bachelor who are also peers, baronets, or knights of the various chivalric orders.[3] In legal and official documents "Knight" should be added after the name instead of "Kt".[4] 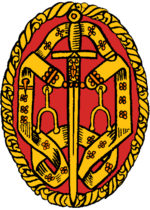 The insignia of a Knight bachelor devised in 1926.

Until 1926 Knights Bachelor had no insignia which they could wear, but in that year King George V issued a warrant authorising the wearing of a badge on all appropriate occasions by Knights Bachelor; this badge is worn on the left side of the coat or outer garment. Measuring 2 3⁄8 inches (60 mm) in length and 1 3⁄8 inches (35 mm) in width, it is described in heraldic terms as follows:[6]

Upon an oval medallion of vermilion, enclosed by a scroll a cross-hilted sword belted and sheathed, pommel upwards, between two spurs, rowels upwards, the whole set about with the sword belt, all gilt.

Ribbon of a Knight Bachelor

In 1974, Queen Elizabeth II issued a further warrant authorising the wearing on appropriate occasions of a neck badge, slightly smaller in size, and in miniature. In 1988 a new certificate of authentication, a knight's only personal documentation, was designed by the College of Arms.[6]

Only British subjects can be created Knights Bachelor; people of other nationalities are generally made honorary KBEs.[7]